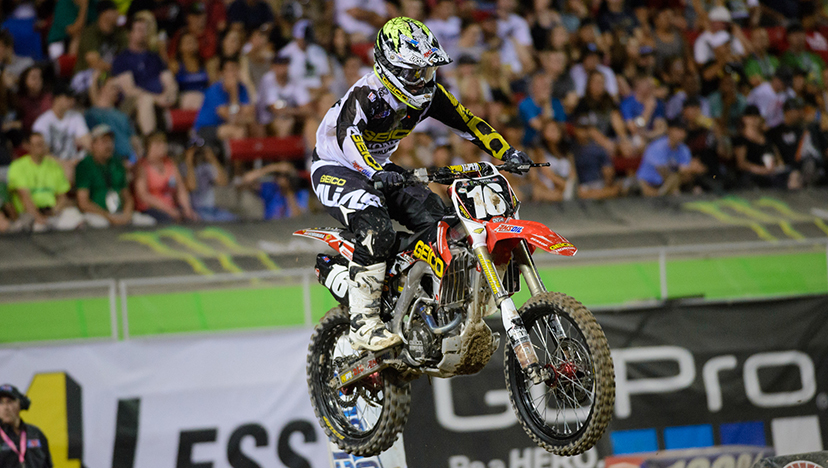 Question: Will James Stewart make it through all twelve Lucas Oil Pro Motocross rounds, without any major incidents?

Jonathan McCready: Going by his history, you have to say no. James has never in his career completed a full indoor and outdoor season in the same year. But, if he is going to break that statistic, it might be this year, although he will probably have the odd big crash. Hopefully he survives the series and makes the USA MXDN team!

Lewis Phillips: Will he make it to the end of the season? Yes, I think he will. But, he will be too inconsistent to challenge for the title, in my opinion. This wouldn’t be a shock to everyone – he does that every year. But, “major incidents” are what you get with Stewart – I don’t think he’ll ever be any different. In 2013, his speed wasn’t where it needed to be, but I do not think that will be a problem this year. I wouldn’t be surprised at all to see that he has the most victories at the end of the season, but it would be surprising if he still has a realistic shot at the title.

Question: Will Zach Osborne turn things around, and be in the thick of the 250MX title fight?

Jonathan McCready: Zach has never been in the thick of a professional title fight before, so I can see him being a solid top five guy again, but maybe just out of reach of the title. I would not be surprised to see him win a moto though, Zach is under pressure to perform outdoors after injury ruined his supercross season.

Lewis Phillips: For some reason, everyone seems to believe that Zach will be a title contender outdoors, but I just can’t see it happening. I can seeing him battling with the contenders on a few occasions, but not so much that he is a contender for the title. I think you will have the elite group (consisting of Pourcel, Wilson, Baggett and Musquin), and then Osborne will be at the front of that next group.

Question: Who will take the most overall wins in the 250MX class this year?


Jonathan McCready: Blake Baggett, the kid is a brilliant outdoor rider and showed at Daytona what he can do on an outdoor style track. If he avoids injury he could be the same blisteringly fast Blake Baggett that won the title in 2012.  Saying that there are so many unknowns going into the 250 class – it might just be the most wide open ever!

Lewis Phillips: Does anyone remember Marvin Musquin? The Frenchman is back! But, it seems most people think that he has fallen off of the face of the earth. Although he is going to be a little behind heading into Glen Helen, he will be back to one-hundred percent soon enough. I really don’t know how strong Baggett will be, as he wasn’t very good (by his standards) last year, so he is a big question mark. Dean Wilson will be strong, although arm pump could continue to hinder him.