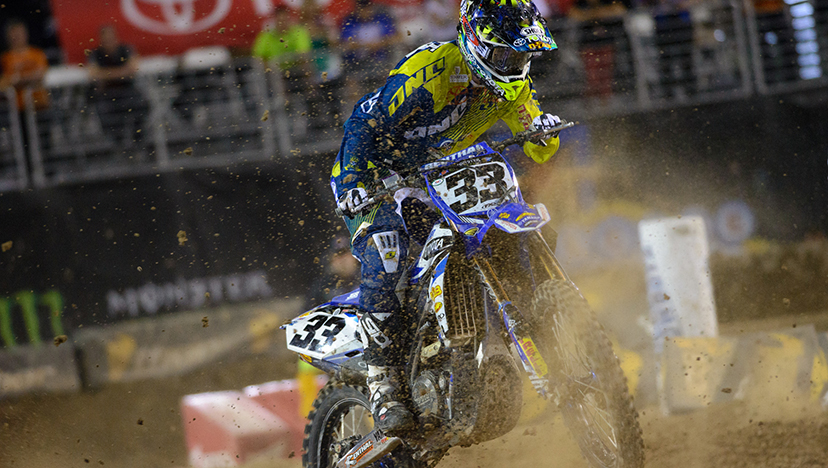 It is no secret that the premier class is wide open, with Villopoto on the sidelines. Who do you think is going to win the 450MX overall at Glen Helen, and why?

Lewis Phillips: This is a tough one. I find it quite easy to choose the favourite for the title (Ryan Dungey, by the way), but anyone could win this one race. I think James Stewart will win Glen Helen, as he has been fast there in the past – he actually won the last he raced there in 2008, which was the year he had a perfect season. Glen Helen is known for being quite dangerous, and Stewart is more likely to ride on the edge in order to win than his main competitors.

James Dunford: Lewis, this isn’t a tough one, it’s obviously going to rain yellow! On a serious note, it’s going to be a close battle. We’ve witnessed a new-ish James Stewart this year, and if he can stay on the bike, and avoid the weird issues, I really think that he could take the title. Having said that, we all know Ryan Dungey is going to be very, very strong. It’s easy to forget the other key contenders, Trey Canard had some solid rides last year and Justin Barcia is out to prove himself before heading off to pastures new in 2015. Chad Reed could be a huge threat, injury dependant. He’s the type of guy that could show up with his A game, and dominate.

How is Brett Metcalfe going to fare in his return to the Lucas Oil Pro Motocross series?

Lewis Phillips: Honestly, I believe that Brett Metcalfe is going to be a lot stronger than most think. Although he is now one of the oldest guys in the class, and has been missing in recent years, he is still very fast – he showed that last year. In my opinion, he could finish in the top five in the standings at the end of the year. Will he win a moto? Probably not (I am not going to rule it out completely though). However, he will be consistent, unlike a lot of the frontrunners, which will be advantageous. So, yeah, overall, he will be around fifth and sixth a lot, and make a couple of trips to the podium.

James Dunford: I’m on the fence with Metty. You can’t forget some of his outdoor performances from past seasons, even his few privateer appearances from 2013 show that he’s still got it. He’s going to be on arguably one of the fastest bikes on the track (he’s already said the power is very different to his Leading Edge Kawasaki) and he’s got a fantastic crew behind him. He should be consistent and I can see him grabbing a couple of podiums. Will he take a win? I’m going to go out on a limb – yeah, he will.

Who needs to have a good outdoor season the most, in your opinion?

Lewis Phillips: I immediately thought of either Jake Weimer and Josh Grant. Both riders will be looking for a new deal for next year, and both guys will want to impress in the hope of getting more money, or better machinery. Out of the two, Grant is the one that probably is in the worst situation, as he hasn’t shown podium speed in quite some time. There are a few reports that suggest he is flying at the moment, which is not surprising, but for whatever reason that rarely translates to good results. Grant is very good at Glen Helen, too, so he could impress at round one.

James Dunford: Can I just say everyone? No? Dammit! I agree with Lewis on both Weimer and Grant, I’d say Weimer really needs to show his stuff. He’s out of Kawi for next year and needs to show his results. Cole Seely needs to show that he is not just an indoor rider, Blake Baggett needs to win a title, Dean Wilson needs to get rid of his arm pump, Davi Millsaps needs to come out strong, the list goes on. Weimer, Wilson and Seely would be my top three.