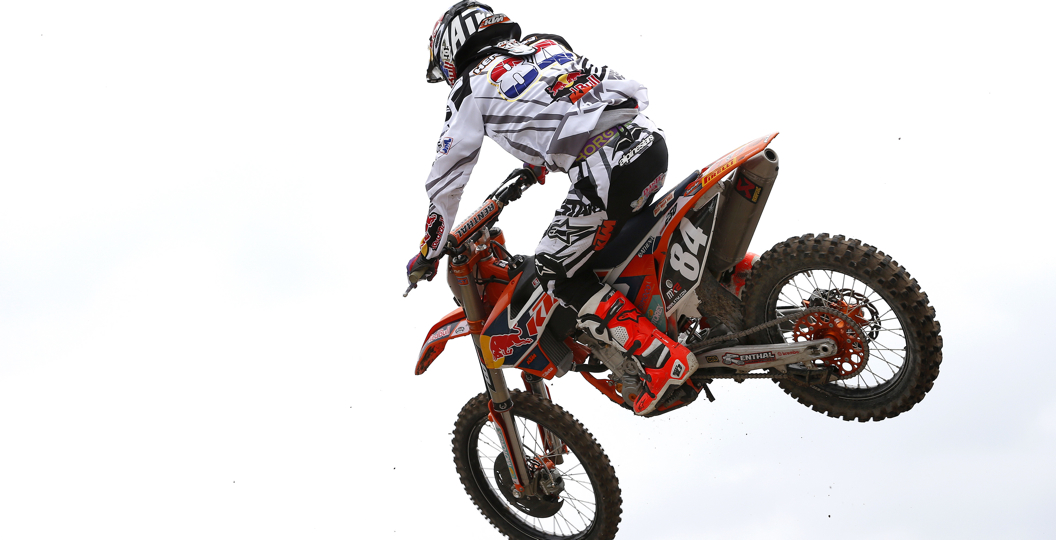 Jordi Tixier, the eventual MX2 world champion, and Jeffrey Herlings had a titanic duel for the title at the final round of the FIM Motocross World Championship. Fans around the world have praised the on-track action, claiming that it was one of the greatest races that we have ever seen.

That is not a ludicrous point; it was an enthralling thirty-minute moto that was filled with unpredictable racing and many sub-plots. It was a unique set of circumstances, although it was just seven years ago that a title fight played out in a similar way. Josh Coppins dominated the MX1 (the class now named MXGP) championship chase in 2007, in his first season aboard a factory Yamaha. Like Herlings, most considered it a foregone conclusion that Josh would win the title heading into the season; he was the overwhelming favourite.

Prior to the GP of the Czech Republic that year, which coincidentally was the first round that Jeffrey had to miss this season, Coppins had an astounding one hundred and seven-point lead, which seemed unsurpassable. However, disaster struck at that round, as an issue with the rear brake caused him to crash on one of the steep hills. He sustained a broken shoulder blade as a result and his advantage in the standings started to dwindle in the weeks following this.

The ways that Coppins and Herlings were injured were very different, but still the fallout of the incident was the same. At the time that both riders had to withdraw in order to recover, there were four rounds left, although Coppins’ rivals (Steve Ramon and Kevin Strijbos) had a smaller deficit to overcome in comparison to the one hundred and forty-five points that Jordi Tixier needed to acquire.

For this reason Josh attempted to return at the penultimate round, as the gap was just twelve measly points heading into Donington Park. Remarkably he got the holeshot in moto one, although a painful shoulder and lack of bike time meant that he filtered through the field down to fourteenth, which is the same result that Herlings garnered in moto one this past weekend, yet another similarity.

Unfortunately for the likeable New Zealander the pain proved to be too much in moto two and, with the red plate already on the Suzuki of Ramon, he withdrew from that race and the final round. He eventually slipped to third in the final standings, but just a few weeks earlier it seemed inevitable that he would claim his maiden world title. This was the last time that he was in a position to contend for a championship, which perhaps makes it more heart breaking than Herlings’ loss this past weekend.

Although the way that the two fights unfolded were very similar, the riders duking it out were quite different. You had two veterans that were nearing the end of the road in 2007, whereas you have two young, relatively inexperienced riders in Jordi Tixier and Jeffrey Herlings. It was evident that they were willing to do whatever they could to clinch the number one plate, although unfortunately for Jeffrey Herlings, he came up just short.

Herlings travelled to Mexico with one goal in mind, to win his third consecutive world championship. Of course he is disappointed, but at the same time he won the hearts of thousands of fans; previously he has not been the most liked guy out there, following his outbursts in 2012. He is a very different rider now and the way that he went over and congratulated his teammate post-race, despite how much pain he had to be in, shows how much he has grown since then. Jeffrey will already go down in history as one of the greatest riders ever, but his ride this past weekend will only enhance his legacy.

Jeffrey has received an abundance of praise and attention for what he did at the finale, but let’s not overlook Jordi Tixier. Some are quick to put an asterisk on his title, but he still did what all of those others riders couldn’t do. It is the rider that acquires the most points that wins – it is that simple to me. Of course there is more to that story, but Tixier is deserving of the title. Staying healthy is a skill; injuries are unavoidable in this sport, as Jeffrey Herlings and Josh Coppins know only too well.