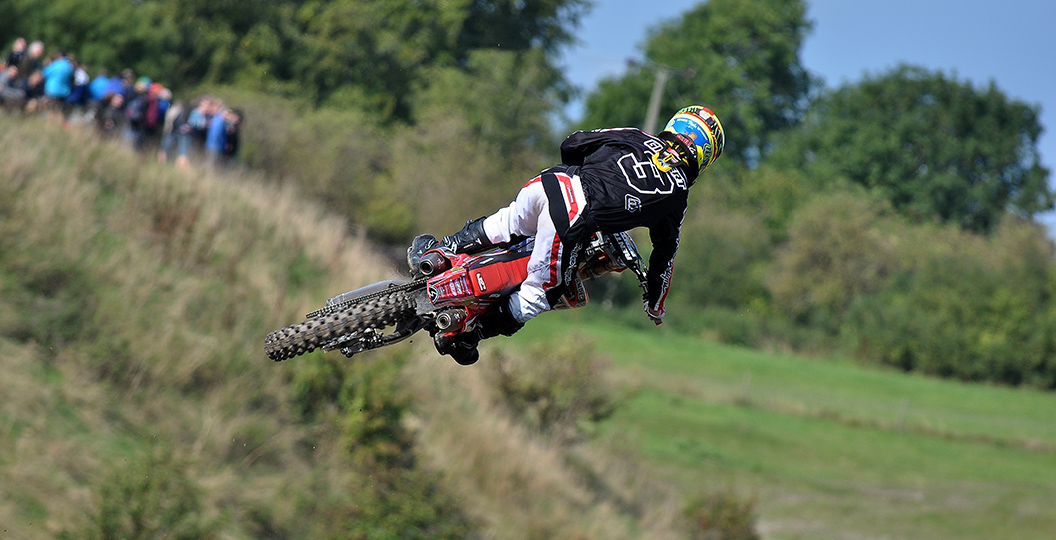 Shaun Simpson had the MX1 title firmly in his grasp heading into the final Maxxis British Championship round this past weekend and the MX2 title was all but locked up. However, there was an interesting showdown to keep an eye on, as four riders were gunning for the MXY2 title.

The MXY2 class has really picked up steam in recent years, as it continues to gain prestige and now really matters to riders, sponsors and fans. The stage was set for a titanic duel heading into the final round, as Josh Gilbert had a small (but crucial) four point advantage over Ollie Osmaston with Liam Knight seven points back and Jason Meara another seven points down. It was a long shot for the Irishman that sat in fourth, but it was by no means impossible.

Liam Knight appeared to be the rider that was on form earlier in the day, as he topped the charts in qualifying by almost two full seconds! Rarely do we see a rider so superior, especially in a class as stacked as MXY2. Liam immediately shot out to the early lead in race one, but then crashed after just a handful of turns and dropped down to twenty-third – the cards were stacked against him at that point. With Osmaston and Gilbert out front and stretching away, it seemed like the title was going to come down to those two, like most expected it to.

Jason Meara couldn’t quite match the pace at the front, so Gilbert and Osmaston were left to battle it out, which they did for the duration. There really was nothing separating the two, although Ollie just inched out his rival, which left us with a ‘winner takes all’ situation heading into the final moto of the season. The gap between the two leaders was 0.388 as they crossed the line, astonishingly. Knight put in a strong ride to pull through to fourth, although his chances of winning the title shrunk considerably, like Meara.

What started as a four-way battle for the title quickly became two separate battles – one for third and another for first. On a track as fast and hard-pack as Foxhill, the start was crucial, so it was interesting to see both Osmaston and Gilbert choose very different gates. Josh positioned himself on the inside gate whilst Ollie put himself closer to the box. It didn’t make much difference in the grand scheme of things, as they rounded turn one together, although Osmaston was able to make an important pass for second (behind Liam Knight, who was again attempting to establish a gap at the front) early on.

Gilbert chased his rival for the duration, but Meara, who was having a much better ride in moto two, past the pair and moved into second, only to crash out just a few corners later. No matter what moves Josh attempted, Ollie seemed to have him covered, as he constantly shut the door. However, with two laps to go Josh made a pass – his resilience paid off. Although Ollie tried everything, he couldn’t make a move and had to settle for third in the race (although he did win the overall) and second in the championship, three points down on the champ.

It was an exciting race and series, which certainly bodes well for the future of British motocross. At different points all four of the riders that were in contention proved that they were worthy of the title, but in the end there could only be one champion.