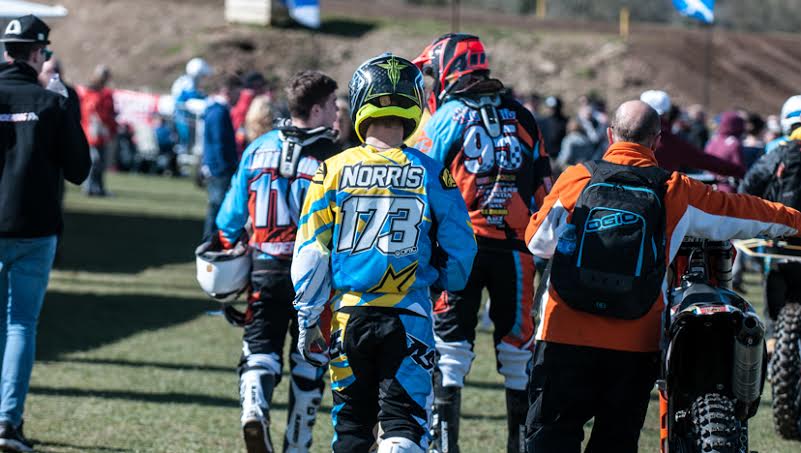 Action-packed! That is how you would describe the first round of the Maxxis British motocross championship.

A hard pack track with baked hard ruts made the track fast but tricky. Between, rocks, ruts and a slick surface the riders had to constantly be aware of lines, avoid roost and keep their balance in the ruts.

Mattis Karro had his corners dialled. The Latvian was carrying so much corner speed everywhere and that is what allowed him to pull away from a ferocious pack of riders all going a similar speed. But after two dominating wins, two impatient crashes cost Karro the overall win. He should have left with the red plate but it was his KTM rival Pocock who claimed it. Karro though has made his point because he is the man to beat for this title – if he can stay on two wheels.

Pocock was impressive because he wasn’t that impressive and he still won the overall! Pocock was embroiled in battles all day with a group of riders who just couldn’t pull away from each other but in each race Pocock managed to put himself at the front of that group. It was a smart ride by Pocock and he did what he had to do.

I’m still trying to work out just how James Dunn qualified 25th then race second in the first race for half the race! Dunn was flying and with more experience could easily have finished second.  He backed up that performance with two more top tens for a very impressive sixth overall. You could see he was comfortable because he was throwing the bike around on the table top before the finish all day. By all accounts Dunn has been flying in pre-season and maybe that talented kid we saw in the EMX125 class a couple of years ago is about to show his full potential in 2014.

The same could be said for Ben Watson. Watson might just be the Adam Cianciarulo of the UK – lots of hype in the youth ranks but had a steady if unspectacular first year in the adults.

At Landrake though he showed why he has been hyped as the next big thing. Watson, not known for his hard pack riding, got a good start in race two and proceeded to work his way into third and catch his teammate Pocock for second. He had that look about him, that little spark in his riding, it was clear that Watson was feeling the flow and with each lap you could see the confidence increasing and the potential becoming reality.

Watson went down early in race three and again had to come through the field but that second race showed everyone, including Watson himself just what he is capable of. If Watson can adopt the same sort of self- confidence Cianciarulo has to go along with his talent, big things will happen for this kid.

Four weeks ago Bryan Mackenzie was lying in pain with numerous injuries after a crash at the Arenacross. Four weeks later the tough Scotsman won the third moto at Landrake. Mackenzie had been fast all day even if his eleventh and twelfth didn’t show it. But once out front Mackenzie made no mistakes was immune to pressure and took an improbable victory.

It all went wrong for Martin Barr again at the first round. A steady seventh despite a stall in the first race Barr was looking to improve after another mediocre start in race two. But he got completely taken out on lap two and an injured hip from the crashed ruled him out for the rest of the day.

The exciting thing about MX2 this year is that there are so many guys so close in speed. If you can get the start there about ten guys who can get on the box. The young kids are getting faster and the old guard aren’t slowing down. It should be some great racing all year.

‘Hero to zero’ that was how Graeme Irwin described his day. The Suzuki man claimed an impressive pole position in MX1 but promptly crashed on the first lap in race one and injured his ankle to go along with his recovering shoulder. Irwin rode on claiming a 19th, 11th and 8th but was clearly in a lot of pain.

That left the big three to fight it out themselves and Whatley, Simpson and Nicholls didn’t disappoint. The three riders were a class apart from the rest of the field and Whatley proved to any doubters that he belongs in the same class as the two GP boys.

Whatley shadowed Nicholls in race one but just couldn’t make the pass for the win. In race two he came from outside the top ten and got to third just behind Nicholls only to go down and have to come back to fifth. In race three he started third and went with Nicholls and Simpson, he eventually got by Nicholls and began catching Simpson only to run out of time.

Whatley is for real and the defending champion is going to fight hard to retain his title. GP teams take note.

Jake Nicholls is still recovering from his back injury and says he is only at 80% but he was on the gas at Landrake. He won the first moto and followed it up with a second and third left him second overall and very much in this championship fight. He should be 100% by Lyng.

But it was Shaun Simpson, the pre-race favourite, who got the job done and left with the red plate. Simpson had to fight for each win but there is no doubting just how comfortable and calm Simpson looks on the bike. There was not any sign of panic in the third race when Simpson couldn’t get away from Nicholls and then Whatley was closing at the end. He just rode his laps consistently and mistake free. Simpson is very confident this year.

Elliott Banks-Browne was solid all day even if he did just sneak into Superpole on the last lap with 12th. In the races EBB was fourth three times for an unsurprising fourth overall. EBB didn’t have the speed of the top three but he and Anderson battled hard for fourth in race three in what was an entertaining duel.

It was a good showing from Anderson in fifth overall. After the disappointment of last season Ando has definitely come out firing in 2014.

The addition of Irwin, Banks-Browne, Nicholls and Simpson has lifted the level of the MX1 series in 2014. With Irwin getting pole and EBB, Nicholls and Simpson filling three of the top four regular places the riders who had been in the top five last year know they have to step it up to get similar results this year.

However there were a couple of surprises in MX1. Matty Moffat had a stormer on the JAR Honda. Despite a DNF in race one Moffat was fast in qualifying and got a ninth and eleventh in races two and three. Moffat has gelled with the Honda so keep an eye on him this season.

Another who impressed was 2013 Irish Champion Gary Gibson. The Suzuki rider got two top ten starts in the first two races and stayed there for the almost the entire race. Gibson looked calm and confident but admitted getting nervous because he was doing so well and dropped a couple of places at the end after making mistakes. Gibson finally brought his speed from Ireland across the water and an eleventh and twelfth will do wonders for his confidence.

Also props to Jamie Law and Alex Snow! Both riders are always there or thereabouts every season but don’t always get the recognition. Sixth and seventh overall is a great start for both of them.

In contrast the Oakleaf Kawasaki team had a bit of a nightmare with both riders outside the top ten overall. Top fives and podium’s are what is expected when you are the official Kawasaki UK team and you can bet both riders and the team will be working hard to improve before Lyng.

It shows just how competitive MX1 is this year, there is no margin for error and you have to be on your game or you won’t be top ten.

Finally, a get well soon to any riders that are injured but especially Ross Hill, who unfortunately lost a finger in a first turn accident. Hill’s dad managed to find the finger in the dirt but it was too damaged to be re-attached. Pretty gruesome.