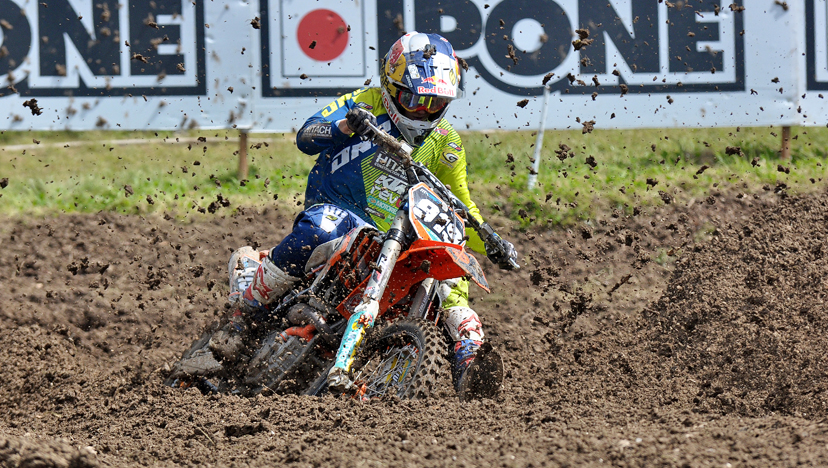 Prior to the British GP, round eight of the FIM Motocross World Championship, I was most looking forward to watching the EMX250 class. Now this may seem peculiar, as for most the premier MX2 and MXGP classes are the main attraction. However, in recent years, the EMX250 class has really gained some pace; it’s now looked at as a necessary stepping stone if a rider wants to make it in the FIM Motocross World Championship.

Of course, the fact that there was an abundance of British riders capable of success in the class this past weekend prompted interest from a majority of the fans. Steven Clarke (series leader), Adam Sterry (a two-time podium finisher) and Ben Watson (two-time moto winner) were the main British protagonists. In fact, had a bit of luck gone their way, we could have ended up with all three up on the podium in front of the enthusiastic crowd.

In the end, Adam Sterry was the only rider that climbed up onto the overall podium, following two inspired rides. If Adam had a little more luck, he could have won the whole thing – the speed was there. In race one, he got a great jump out of the gate, but he slipped off twice at different points (they were only minor falls), which left him playing catch-up. However, he still finished sixth, and had the third fastest time, so, there were definitely positives that he could extract and utilise going into moto two.

Another average start for Adam in moto two left him with a little bit of work to do, as he had to move forward from the verge of the top ten. But, yet again, he put his head down, moved forward and did exactly what he needed to do. In the end, he captured fourth, which was just enough to put him up on the overall podium, for the second time in his career. Like in Spain, he did not actually realise that he made it up there, funnily enough. It was close, as Adam beat Clarke by virtue of a better second moto finish.

Although Steven did not finish in the top three overall, he still made it up there to collect the red plate, which is obviously the ultimate prize, of course. Despite the fact that he has only finished up on the moto podium twice (in six starts), he still has a twenty-one point cushion in the standings. Inconsistency is rife in the EMX250 field, which means that there will be big points swings a lot of the time. Clarke is the only rider that has finished in the top ten in each moto!

The first EMX250 moto at Matterley Basin was one that left the fans elated, as Ben Watson and Steven Clarke led the pack around early on. Clarke made two mistakes in that moto, but he still finished fourth, which was good for the title fight. Of course, he also set himself up to finish on the overall podium – all he needed was a solid result in race two. But, he had a bad start, and had to work his way forward from outside the top ten. In the end, Steven salvaged a sixth, which again aided him in the standings, as he now has a twenty-one point cushion.

In my opinion, Ben Watson was one of the most impressive riders this past weekend. In fact, I would say with confidence that he was undoubtedly the fastest rider in his class. Honestly, his ride in moto one was extremely impressive – he really was faultless out front; he took the holeshot and ran away with ease. The EMX250 guys actually had some of the trickiest conditions to contend with in race one, as it started raining when they were sat on the line, which played havoc with their goggle prep. It then rained on and off throughout their race, so the conditions were constantly changing.

Anyway, I digress. In that first EMX250 encounter, Ben was consistently lapping a second or two faster than most of the field – we haven’t seen dominance like that in that class so far this year. Unfortunately, disaster struck at the start of the second moto, as he was taken out (unintentionally) by another rider and hit the ground hard. Initially, it looked like he was injured, as he was slow to get up (later it became apparent that he hurt his hip). However, after collecting himself, he returned to the track, almost a full lap down on the rest of the field.

Impressively, he kept going – I honestly presumed he would pack it in. But, he put in the laps, and managed to stay on the lead lap. Although he did not garner any points for his hard work, it was an inspiring ride, and one that was applaudable, considering the circumstances; he must have been hurting, both physically and mentally.

When you look back, all of these riders showed a lot of heart and determination at some point over the weekend, which bodes well for the future of British motocross. Of course, racing in front of the home crowd can either have a positive or negative effect, as there are a lot of commitments that a guy must adhere to. But these three thrived at the scenic venue, which resulted in some exhilarating EMX250 action.