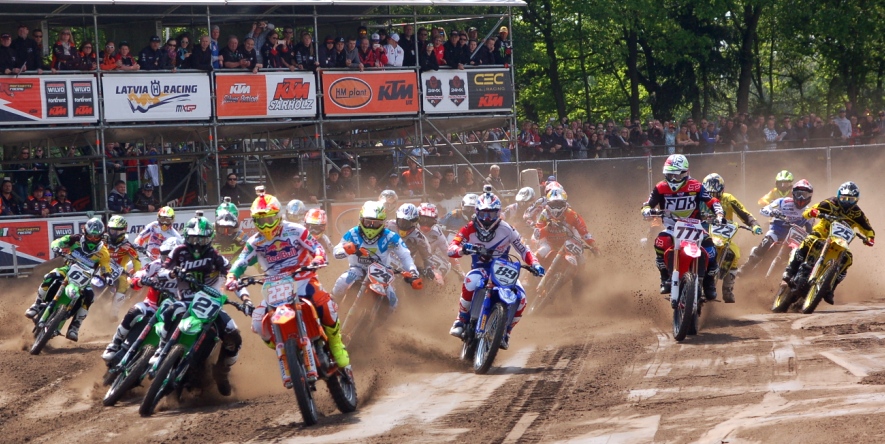 The most impressive thing about the Dutch GP was just how much racing was packed into the two days.

With EMX150, EMX125, WMX plus MX2 and MXGP, the huge enthusiastic crowd certainly got their money’s worth over the weekend.

The track itself was beat up badly. And to see just how Cairoli and Herlings take the track apart makes it a privilege to be there. Both riders are incredible in the sand although both have slightly different styles.

Cairoli hops, skips and jumps his way around place and is very light on the bike. Herlings has a more aggressive, forceful way around the track using his legs to put the back wheel exactly where is wants.

Herlings of course had the fastest lap times of the weekend and even admitted after that he was finally happy with his riding.

The Dutch crowd almost sat back in expectant admiration of their hero before giving him a huge ovation on the last lap of the GP to express their appreciation of just how incredibly good their countryman is.

But Herlings wasn’t the only Dutchman the home fans had to cheer for! Davy Pootjes was superb in the EMX125 division and Rick Elzinga went 1-2 in the EMX150 class. Both Elzinga and Finland’s Jere Haavisto were on another level  in the Honda 150 series and both were seriously impressive in Holland doing lap times three to four seconds quicker than everyone else.

But not all the fans were from Holland. There were sporadic British flags dotted across the track and of course the Belgians were out in force to support Van Horebeek, Desalle, Strijbos and company.

Van Horebeek only lives 20 minutes away from the track across the border and is some ways this was as much of a home GP for him as the Dutch guys! Van Horebeek got on the podium again to the delight of his fans but admitted it was a bit of extra pressure too!

The pit presence from the EMX150 class is very impressive with over 30 bikes all lines up ready to go and a team of mechanics milling around all weekend helping the youngsters out.  The depth of the class has also went up a level since 2013.

Talking of impressive, the Husquvarna team are not messing around! They got best spot in the pits alongside KTM but their trucks might be even more impressive than their orange cousins.

Husqvarna are serious about becoming a big player in GP racing and it won’t be long before they will be hiring riders who are capable of getting podiums and race wins. Rattray will be under pressure for the rest of the season to get the results the factory want or he could well be out the door. Husqvarna aren’t there to get seventh place.

HRC Honda have also an impressive pit presence. The HRC logo is all over the vans and lorries, it’s simple and classy and demonstrates just how much investment Honda are putting in to the MXGP and MX2 teams and how much they value the motocross world championship again.

Like Husqvarna, HRC Honda are not messing around and if you are to judge the next couple of years on the presence of the teams. Honda and Husky could be the biggest players and payers for the riders in the next few years alongside KTM.

Don’t be surprised if their investment prises a Marvin Musquin back to GPs or even a top US rider in the next few years. Things are definitely moving in the right direction in GP motocross.

One of the biggest on track highlights was seeing the EMX125 class. With two qualifying groups and an LCQ race just to make the top 40, it was almost a throwback to the old 125 GP days. The kids are flying and to make the top 40 you have to be a top rider. And racing on a track like this is priceless for their development.

Conrad Mewse looks good on the bike when you watch him on a fast lap but is maybe just lacking the height and strength to really compete at the front.  Don’t be fooled by his results, the kid is still flying, but he just hasn’t the experience on the big bike yet and he has a lot of fast competition, a lot of whom have been in the class for a year already.

But the stand out thing that sticks in your head coming away from the track is the sheer skill of the GP riders to let the bike work under them as they navigate the ever changing bumps and ruts on the track, they turn bumps into doubles and create new lines continuously that mere mortals don’t even see.

It forces you to come away with that burning question – just how do they do that?