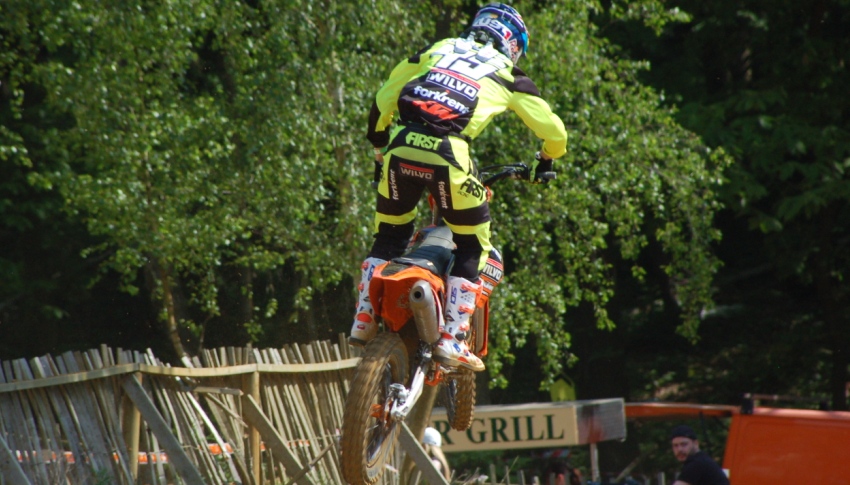 What a day’s racing at Canada Heights! Great racing, a big crowd and superb weather made it the picture perfect day for British motocross racing.

But one of the most notable observations was just how GP riders Shaun Simpson and Jake Nicholls have improved in MX1 over the three rounds by being able to race against the best in the world in MXGP.

While British- based talents Graeme Irwin took pole at round one and Kristian Whatley ran both Nicholls and Simpson close at Landrake, the first two motos at Canada Heights showed the increasing gulf that is being created at the top of the championship.

Irwin gallantly held on to Simpson and Nicholls for the first three laps of the first moto with Whatley right in his wheel tracks but slowly but surely Nicholls and Simpsons edged their way into the distance, leaving the British based duo to battle it out for third.

Whatley of course had an impressive moto three catching Simpson but the Scot did allude to a problem during the race and had to play it safe.

There is no doubt that Kristian Whatley has GP level talent, but not riding GPs is costing him the opportunity reach that level on a regular basis. When Kristian is on, he is on but Simpson and Nicholls are running that pace week in and week out and riding at GP level is surely helping them as the season goes on. Kristian’s job of defending his title is getting harder every week as his rivals get quicker in the GP’s.

This brings us to the British GP this weekend where our home riders have the chance to test themselves at a higher level. Graeme Irwin and Nathan Watson are in but reigning British Champion Kristian Whatley isn’t.

Irwin is still determined reach that top level, even if he has to pay his own entry fee, while Whatley feels that it just isn’t worth it to pay his costs to race the best in the world even if it his home GP.  Watson is the youngest of the three so clearly has the biggest room for improvement and is keen to take his chance just like Irwin.

I can see both sides of the argument but it is a shame for the British fans not to see the current British Champion test himself against the best and maybe show the GP teams just why they should give him a ride for next season or even put himself in the frame for the MXDN. There is no doubt in my mind that Whatley is at the very least as talented as Todd Waters and he should be in a GP team like the 2013 Aussie National champion.

Similarly Graeme Irwin who beat another Aussie who got a GP ride this year (Luke Style at Lommel two years ago) also finds himself in the GP wilderness but Irwin is still desperate to reach that level and is still hopeful that he can fulfil his GP dream. If determination can make it happen, Irwin will get there. This weekend is his shop window.

Nathan Watson has the biggest opportunity given his age and if he brings his A game he could open some eyes over the weekend.

But quite why the Aussies are getting GP rides ahead of equally talented British riders is a story for another day but it maybe points to the fact the British champions doesn’t get the respect it deserves on the continent.

The simple fact is our British championship guys are very fast and very talented but they need to be racing more regularly on the GP stage if they are to get to the level Jake Nicholls and Shaun Simpson are currently riding at. So fair play to all the British-based riders who are doing a one-off ride at the British GP whether that is in MXGP or EMX2, these guys are giving themselves the opportunity to improve and getting an experience of lifetime to race in their home GP.

When you turn up to the Matterley Basin this weekend make sure you hang over fence and cheer for the British-based riders who aren’t racing for money but want to test themselves against the best in their home GP.  These boys deserve some credit and encouragement during the races for living their GP dream – even if it is only at one event a year!