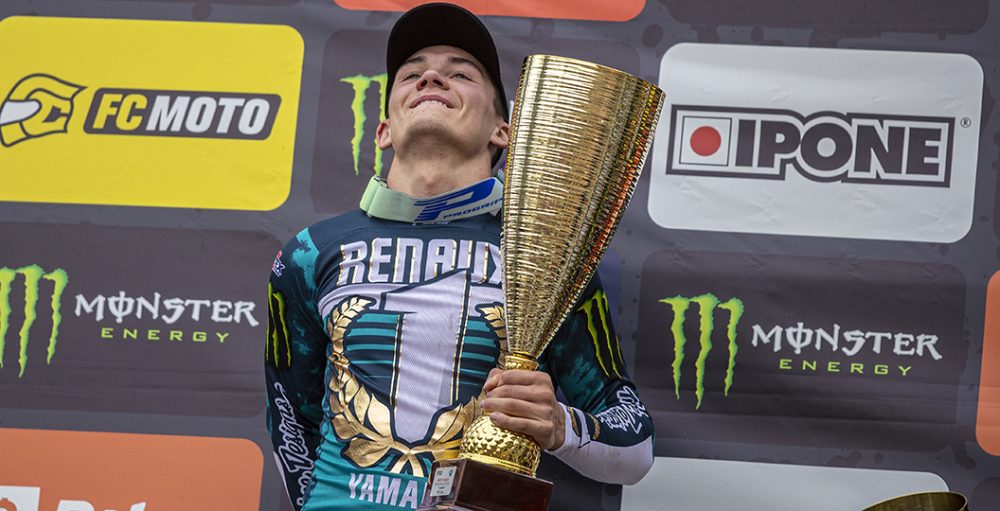 Did you know that Maxime Renaux used Vertex Pistons when clinching the MX2 title in the 2021 FIM Motocross World Championship? Renaux used the industry-leading pistons along with his Monster Energy Yamaha Factory MX2 teammates. Vertex Pistons captured seven of the eighteen pole positions in the MX2 class, led 221 of the 611 laps, won seventeen of the thirty-six motos and nine of the eighteen Grands Prix. A very impressive season! Vertex celebrate their world title below.

Quality brings results and so after the victory at the 2021 Internazionali d’Italia with Romain Febvre, the one at the Prestige Elite MX1 Championship with Alessandro Lupino and the last one at the Italian Women’s Championship with Kiara Fontanesi, it was also gold in MX2 for Vertex Pistons.

The season had begun uphill for the 21-year-old Frenchman, who dislocated his shoulder at the Internazionali and made his debut in the world championship a bit on the sly at the opening race in Russia, but then everything had gone better and better and led him to conquer five victories, five second places and two third places of GPs, up to winning the championship with two races to spare.

“It was an amazing feeling to win after so many years of work and dedication. I am really happy for all the people around me, who all gave their best to reach this goal,” Maxime Renaux said. “I think that we progressed on every topics with my team: technically, mentally and we also got a step on the bike with a really good engine supported by Vertex Pistons that made it even more strong and reliable.”

In MX2 since 2019, the French rider raced this season with the goal of victory after finishing third last year and he succeeded. For 2022, however, he is still undecided on the class in which to compete and reserves the right to take more time to talk about it with Yamaha. One thing is certain, no matter whether it is MX2 or MXGP, this young and talented world champion will race giving his best, always supported by his team and by all of the sponsors that believe in him.