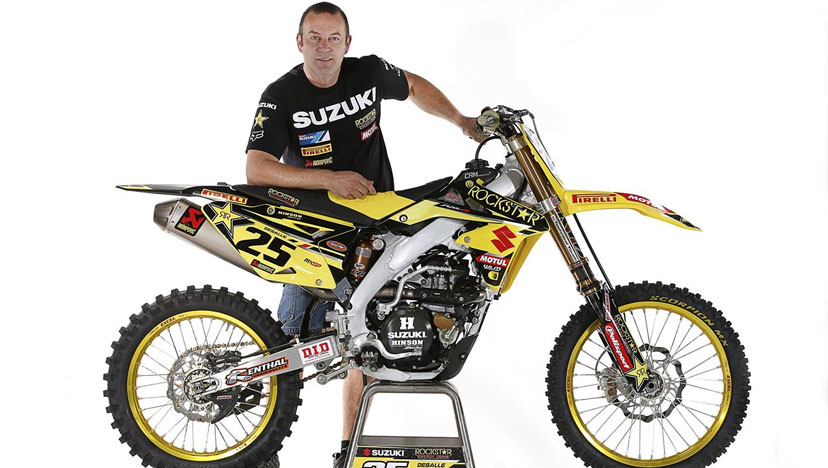 The Grand Prix of Spain at the hilly Talavera de la Reina circuit southwest of Madrid will represent round seven of the FIM Motocross World Championship this weekend.

As Rockstar Energy Suzuki World MXGP travel through Europe with the factory RM-Z450s of Clement Desalle (third in the MXGP series standings) and Kevin Strijbos (fifth) the team will be hoping to add to their podium tally of five trophies in the six GPs to-date.

One of the key figures in the team set-up is Marc Ver Paelen. The Belgian has been working for Suzuki for seven years and has combined with two of the best talents to come through the FIM Motocross World Championship in the last decade; Ken Roczen and his current rider Clement Desalle. The 54 year old from Mol used to grease the spanners for co-staffer Joel Smets when the Belgian was winning races on a Husaberg. Since he turned ‘yellow’ and fine-tuned RM-Z250s and 450s Ver Paelen’s quiet and calm manner has been a key part in the MX2 and MX1/MXGP success for the brand.

So, how did the Suzuki story begin?

“I used to have my own small team in Belgium and was working in a shop but I wanted to be back in the Grands Prix. Some years ago I lost my wife and I had a daughter, so I stopped motocross. In 2007 I was doing some business with Jacky Martens and KTM but then I had a phone call from Sylvain [Geboers, owner of Geboers Racing Promotions]. He asked me to work for him. I almost had an agreement with Jacky but spoke with Sylvain and liked what he was saying. I was the mechanic for Marvin Van Daele but he became ill that season and did not ride. So I had a new job and was in the team, but not doing anything! I ended up being the practice mechanic for De Dycker [Ken] and Ramon [Steve] and that went well but by the end of the season there was talk of giving support to this kid called Ken Roczen. So I started working with him when he was 14 years old. We did the first GPs that year…and it went better and better.”

When you look at Roczen now did you imagine back then that he would be able to achieve all what he has done?

“Yeah sure. Roczen is something special. He is so focussed and when he wants to do something then he just does it. It costs what it costs but he does it.”

“He couldn’t do the first four races because he hadn’t turned 15! Just before the Portuguese GP he won the European Championship round in Faro. We then went up to Agueda. On Saturday he was so nervous that he crashed three or four times. He was still like that on Sunday and crashed at the start of the first moto I think…but came back to 17th place. In the second heat he was fourth. So there was a lot of promise. A week later in Spain he almost won the GP!

“For me it was easy to work with him. Most riders have a basic idea of the setting they want; usually not so complicated but a general outline. He was so young and learnt literally every week. He didn’t know about suspension and other stuff. He just knew how to get on the throttle and that was the important thing. After a while he got more experience and more prepared in terms of getting the bike ready. He was definitely a kid…but he was growing up fast. I remember going to the Grand Prix in Brazil that year. It was raining so hard on Saturday that they cancelled the practice and qualification and there were already a lot of people at the track. The organiser had his head in his hands because he did not know what to do with all the fans. Roczen came up and took the microphone from the PA and said “let’s do some interviews with the riders”. He can sell himself so well and nothing is too much. He was unbelievable.”

Then you moved onto MX1, the 450 and Clement Desalle. A different character?

“Clement is a guy who knows what he is doing. He is very professional and I like working with him because of this. He is special; very motivated. Sometimes he gets a bad name because he likes to tell the truth about a situation. If he is on the gate getting ready for the race then he might turn away from the TV crew, but that’s because he is doing his job. From when he enters the track until he leaves then he is dedicated to the job and that can be taken the wrong way now and again.”

Does that intensity mean that your job can be a bit tricky sometimes?

“No, it is definitely good for me, and I think I can be a good influence on him. I have learnt in this job – as mechanic – that I will never be a good friend with the rider. It doesn’t mean that Clement isn’t a friend but we are both professionals. I think if you are too close with a rider then you can make mistakes. He might ask something that is technical and not good for the bike and it would be wrong. We both do our jobs well and if I ask something of Clement then he will do it for me, and vice-versa, but I am not hanging around him. I did it also with Kenny. We had a good relationship but we were professional.”

“I think it would be difficult to work anywhere else; and I don’t intend to! When it stops for me here then also for my career in motocross. I like to do my job and to work for Sylvain, who is an unbelievable boss because he always wants the best things for his staff. I feel that we still learn things and for me personally that is the most important.”

The RM-Z450 seems to make small steps each season without any radical changes. Is it a good machine to work on?

“Very solid. We’ve hardly had any problems with it. The one I remember was at Maggiora last summer where the electronics caused the bike to stop: that was frustrating! I think the team and the material is at such a high level. In the workshop if we need something then we ask and we get it…or we make it!”

The Rockstar Energy Suzuki Europe team go to Talavera buoyed by the speed of Julien Lieber and Jeremy Seewer in the sand of Valkenswaard last weekend. On the RM-Z250 in the MX2 class Lieber picked up his best result of the season with a seventh position in the first moto and Seewer was also running with the leaders in his first sandy Grand Prix. The Belgian and Swiss are of course without third team-mate Glenn Coldenhoff who is nearing almost two weeks since his unfortunate training accident and knee injury that required a comprehensive operation on the eve of the Dutch GP.

The 23 year old gave an update, saying: “I’ve stopped taking painkillers two days ago and now I’m just waiting for some test results before I can start working fully with my doctor here in Holland. I had the operation in Stuttgart but it is not so easy to travel there all the time for check-ups so I am sending reports to the doctor there that did the operation.

“I am just waiting for some exercise equipment from Ortema actually so a timetable for the rehab and recovery is definitely in place,” he added. “I am told it will be around 12 weeks for the bone and the ligament to heal so I should be able to run, cycle and do everything normally by mid-July, if everything goes to plan.”

Coldenhoff picked-up three podium results in a row with the works RM-Z250 before his untimely ailment. The injury will force him to miss most of the season but he already has his eyes on a comeback date. “I have my sights set on the last GPs in Brazil and Mexico in September. I want to be back and going straight for the podium. Hopefully also in contention for the Motocross of Nations. That’s what I am working for.”

Talavera will take place without the friendly Dutchman and will be a new circuit for almost all of the riders in the MXGP and MX2 field courtesy of 14 years away from the Grand Prix spotlight. In fact the FIM series heads back to Spain for the first time since 2011 for a long overdue visit.

The weather forecast for the weekend predicts hot and sunny conditions with temperatures nearing thirty degrees on Saturday.