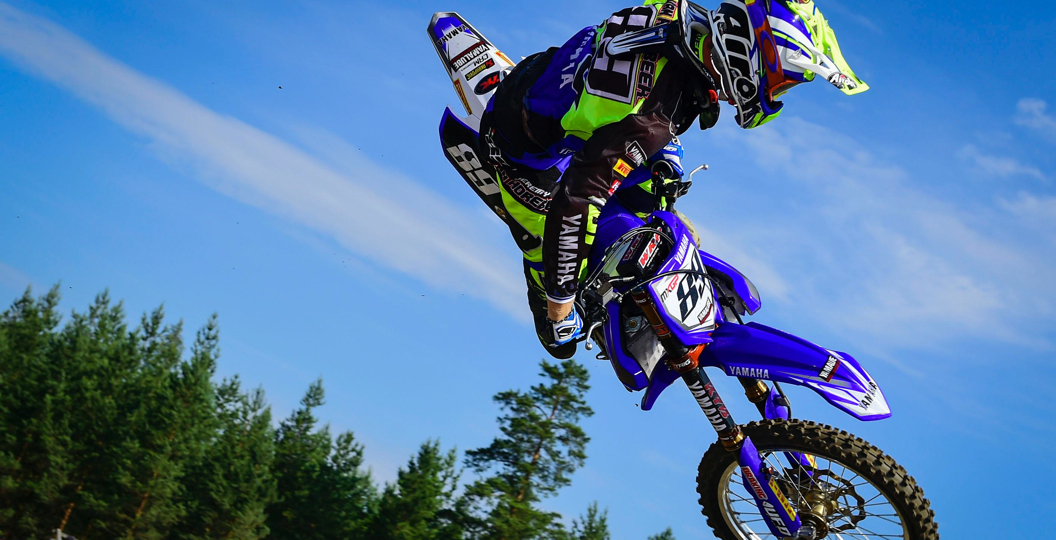 Jeremy Van Horebeek only just missed out on extending his remarkable run of podium results in the 2014 FIM Motocross World Championship as the Belgian finished fourth overall at Hyvinkää for the Grand Prix of Finland. JVH made a very rare mistake that dropped him from second place to almost outside the top twenty during the second moto at the short, compact and largely flat venue close to Helsinki but rallied hard to rise to tenth position in a good ‘salvage operation’.

17,000 spectators surrounded the difficult sand where decent summer temperatures and good racing conditions made for a positive thirteenth round of seventeen in the FIM series and the MXGP premier class. Hyvinkää was tough due to the many short bumps and hard base of the sand. Some sections could be attacked in typical ‘sandy style’ others required a more cautious approach.

Van Horebeek rode to second position on Saturday and for the qualification heat to ensure the same pick in the gate for Sunday’s two thirty minute and two lap motos. The Grand Prix transformed into a duel between the principal title rivals as JVH faced up to reigning champion and points leader Tony Cairoli.

The first race was owned by Cairoli. Van Horebeek remained close in the opening stages but was then mindful of the exceeding his limit negotiating a track that he described as “heavy”. Neither Max Nagl nor Steven Frossard could come close from third position and the Belgian posted his ninth runner-up moto result from the twenty-five run so far. He was trailing Cairoli again in the second moto when a mistake caused a crash, a headache and a damaged motorcycle. He pitted to fix a bent radiator shroud and then started a recovery trawl from eighteenth position all the way up to tenth place and only just missed out on a twelfth consecutive podium celebration by just one point.

David Philippaerts took his DP19 Racing Yamaha YZ450F to eighth position overall and was the second of three Yamaha riders in the final top ten. The Italian was part of the Motocross of Nations Team Italia presentation on Saturday where he is set to take his new truck and set-up to Kegums in Latvia for the historic annual racing bonanza at the end of September. Back on the Finnish sand however the former world champion was trying to deal with the tough and sketchy nature of the track. He barrelled his way to ninth place in Moto1 and won a fiercely contested skirmish with Matiss Karro. During Moto2 he was again with the Estonian and should have scored eighth place but was relegated one slot to ninth by Ken De Dycker on the last lap.

Bike it Yamaha Cosworth’s Rui Gonçalves posted his best qualification finish of the season so far with fourth place on Saturday. The Portuguese had almost recovered from his virus suffered the previous weekend in Sweden and being a competent sand rider was relishing the prospect of attacking Hyvinkää; almost a shorter and shallower warm-up for ‘real’ sand to be found at Lommel for the Belgian Grand Prix next month. In Finland Rui rode the YZ450F to ninth in the GP classification and his excellent sixth place in the second moto represented his best of the season and since joining the British Yamaha crew.

With thirteen rounds full on the championship sheet for MXGP the table currently shows Van Horebeek 62 points behind Cairoli with Philippaerts in eighth and Gonçalves in eleventh. The Grand Prix of Czech Republic at the stony and windy venue of Loket on July 27th means a trip to a favoured course for Van Horebeek and also Philippaerts and will be the penultimate meeting in Europe this year.

Jeremy Van Horebeek: “I felt good all day. I had a good start in the first moto and was with Tony all the time. I kept my speed. Second moto: good start, second again and Tony pulled away so I was settling for second again. I don’t know what happened next. I was not riding over my limit and was riding smoothly. I don’t know how I crashed. I was up pretty quickly but I hit my head and the radiator was stopping me turning to the left. I lost a lot of positions to come into the pits. I needed a couple of laps to get myself together but I told myself I could do it even thought the handlebars were bent and the bike was damaged. Finishing tenth is OK. It has been a bad GP. Just two more positions in that second moto and I would have been on the podium again. I lost too much time getting to the pits. I’m not injured and that’s important.”

David Philippaerts: “I feel good. To finish eighth overall and keep top ten in the championship on this difficult track is positive. I thought the sand was better yesterday because today it was almost dangerous and I couldn’t find a solution for it. I stayed quiet in the first moto because I knew it would be a long day. I was ninth, which was OK. Somebody caught my front brake at the start of the second moto so I didn’t get away well but I stayed on the inside of the first corner and came out well. I battled with Karro again and it was a good race. When Strijbos caught us I made a big mistake on the downhill; I had to shut off for three laps because my heart went through the roof. I really did not want to crash because we still have some races left this year. Anyway it is good to stay around the position we were today.”

Rui Goncalves: “Yesterday was a good one and I had a good gate pick for today. I was hoping for the same start like Saturday and while they were not bad they were not the same! I had a small problem with the clutch setting in the first moto and I needed to keep adjusting in the first moto. I dropped back with some arm-pump and it was a bit frustrating because I knew I had the speed to be nearer the front. I talked with my mechanic about a strategy for the second moto and we went a bit more cautious in the beginning and I tried to focus more on my riding style and to get more speed through the corners so I would have more energy for the end and that’s what happened. I still feel the effects of the illness but I’m much happier with that second moto. I cannot thank the team enough for all the help and we’ll move onto the Czech Republic now hoping for more good results.”