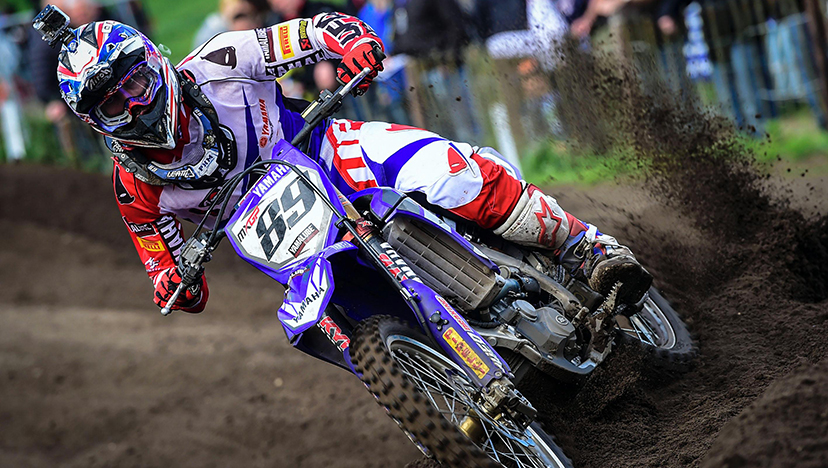 The typically rough and bumpy Valkenswaard sand demanded a special skill set from the FIM Motocross World Championship riders at the Grand Prix of the Netherlands and Yamaha Factory Racing’s Jeremy Van Horebeek responded admirably to finish as runner-up, take his fifth podium result in a row and from the six rounds of the MXGP series so far.

27,000 spectators turned out under blue skies and in pleasant conditions at the staple Dutch venue a short distance south of Eindhoven and close to the Belgian border. Van Horebeek started the weekend in fine form once more with the fastest lap-time in Timed Practice and then a strong run to second place in Saturday’s qualification Heat. The team had been testing refinements to the sand setting on the YZ450F as well as reinforcing their prowess out of the starts. JVH came into the race nursing some bruises after a fall during another victorious run in a Belgian Championship meeting on the May day holiday on Thursday.

The YZ450FM was a rocket out of the start gate in Holland and Van Horebeek was inside the top three around the tight chicane section in both motos. In the opening sprint he set a pace to remain third behind Antonio Cairoli and Gautier Paulin and when the world champion developed a problem with his front wheel was able to relegate the Italian and move into second spot. In the second moto Van Horebeek was second to Cairoli and being chased by Kevin Strijbos. Safe in the knowledge that he had the overall runner-up position in the bag – and after one or two mistakes – ‘89’ let his quicker countryman through and circulated to his eighth top three ranking from the twelve races run in the year so far.

The champagne spray and another trophy means that Van Horebeek is now second in the MXGP Championship standings (6 points in front of Clement Desalle and 31 behind Cairoli) with over a third of the season now wrapped.

DP19 Yamaha racing’s David Philippaerts ended the weekend with fourteenth overall. The former world champion was limiting the damage at a difficult circuit after a severe bout of the Flu had left him bed-ridden for over half a week following the wet Grand Prix of Bulgaria. The Italian was fourteenth in both motos. Bike it Yamaha Cosworth’s Rui Goncalves was twentieth at the end of the day and struggled to hone his set-up in terms of suspension to get a decent feeling on the sand. The Portuguese continued to work with the Ohlins technology and made improvements in the second outing to finish thirteenth. A mishap at the beginning of the first race meant he was last by a healthy distance and could not reach the points.

The Grand Prix of Spain at Talavera de la Reina will represent the seventh round of seventeen in the 2014 campaign and is likely to see confirmation that the date in mid-August that was originally slated for the GP of Ukraine to be removed from the schedule. Talavera will play host to the first Spanish fixture of the FIM Motocross World Championship since 2011.

Jeremy Van Horebeek: “I had a race at the Belgian Championship on Thursday and a crash there, so I was still a bit sore this weekend and not feeling 100%. Overall it was a good day though and I am happy to be on the box again. We improved our starts today also, so I’m pleased. There were a lot of fans here and this place is only twenty minutes from my home but as a Pro sportsman you have to adapt to the pressure and the spotlight. I did my own race. I was feeling pretty good in the second moto but when I tried to go even faster I was making too many mistakes. I knew even if Kevin [Strijbos] passed me then I would still be second so I let him by. A big thanks to the team; we are five in a row now so I am stoked about that.”

David Philippaerts: “A difficult race. I was not fully fit this weekend because I was sick after Bulgaria and spent four days in bed with a fever and temperature near forty degrees! I didn’t ride the bike since the last Grand Prix so not ideal preparation for the sand. I pushed as much as I could but I felt finished in the second moto. The result was not good but we’ll see the next race. There are some good tracks for me coming up and I want to take as many points as possible because this will be important for the championship.”