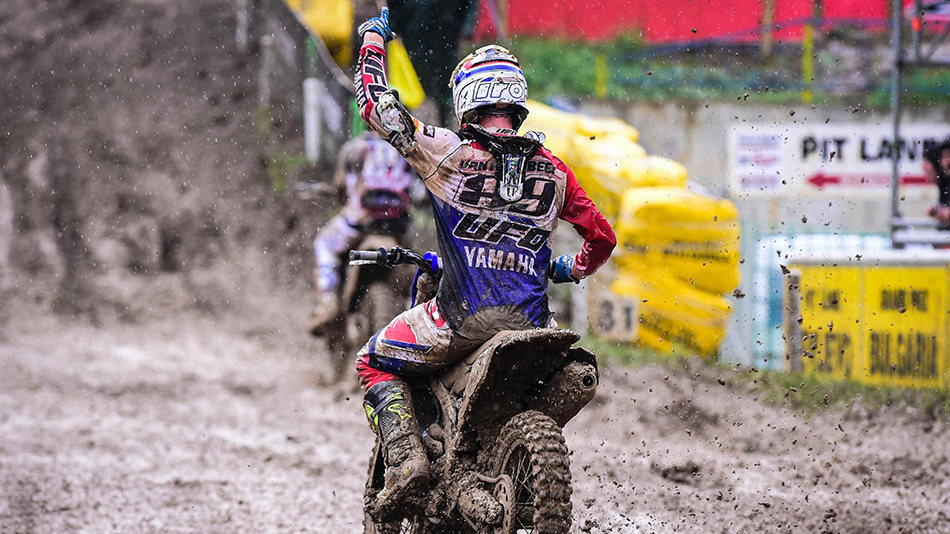 The premier MXGP class of the FIM Motocross World Championship continues to be a happy hunting ground for Yamaha Factory Racing and Jeremy Van Horebeek. The combination of the Belgian and the YZ450FM linked together positively at Sevlievo today to gain third position in the overall standings. The result meant a fourth rostrum appearance in the five rounds of eighteen in the 2014 term so far and brings JVH joint second in the MXGP standings.

Sevlievo was battered – and actually benefitted – from heavy rain in the lead-up to the Grand Prix. The weather helped to create a soft, rough and immensely rutted racing terrain with a plethora of grip. The hard-pack was mostly transformed into a technical and difficult layout and with modifications for 2014 (two new sections of turns) the course was slower compared to previous years and more of a challenge. The steep downhills and uphill drags still placed hard emphasis on engine and suspension performance but the possibility for riders to try different lines and make up time on their rivals was an important factor. On Sunday afternoon – midway through raceday – the rain started again and the second moto was run in muddy and slippery conditions.

Van Horebeek rolled into the start gate with second position after an effective outing in the qualification heat on Saturday (a day that saw the timetable amended to help the state of the track). A largely static first moto in the sunshine saw the Yamaha circulating in third place and Van Horebeek was frustrated to finally cross the line in fourth after a small crash (through a problem with his goggles and also a backmarker) allowed Kevin Strijbos to demote him by one slot. With the weather reversal for the second race JVH played a percentage game and rode smoothly and smartly to secure second and register his tenth consecutive top five finish for a final scorecard of 4-2 and the bottom step of the podium. Jeremy now guards second position in the MXGP championship table with Clement Desalle and is 28 points behind leader Tony Cairoli.

DP19 Yamaha Racing’s David Philippaerts was competing at the venue where he took his first victory for Yamaha back in 2008. The former World Champion didn’t enjoy the best of starts but produced two solid races on the fringes of the top ten to bag some valuable points. The Italian rode to 11th and 12th for 11th overall.

Bike it Yamaha Cosworth’s Rui Goncalves had a difficult day on the bumps. The Portuguese veteran had twinged his back in the first session on Saturday and had to complete the first day with painkillers. Rui came through the motos in discomfort but was able to dig out some effective results in the circumstances with a 13-9 delivering a top ten overall placing for the day.

The Grand Prix of the Netherlands will occur at the staple venue of Valkenswaard, near Eindhoven, in two weeks time.

Jeremy Van Horebeek: “This is not my favourite track and I have never been on the podium here before so I’m pretty stoked about this result. I struggled all weekend and was not feeling comfortable but together with the team we have made a great bike – which made things easier – so I’m really happy for that. We still need to work on the starts, and these have to get better if I want to win races. In the second moto it was not that muddy actually, more slick, and we were sliding a lot because the track was so hard. I rode like an enduro rider! Trying to be smooth and standing on the pegs a lot; this helped. Four podiums in four rounds now and Valkenswaard is close to my place. I love sand riding and I have worked a lot on this in the winter because I felt I was having difficulty with the MX1 bike. Now I feel good and I’m looking forward to going there.”

David Philippaerts: “Today things were a little bit better and I’m happy to have two solid motos. In the first one I was riding well, and finished eleventh. The speed was good, even if my start wasn’t from the thirteenth gate. In the second moto it was really difficult in that rain and especially when coming through the pack. I had some problems with the handlebar grip but anyway it was a consistent day. The bike was good, my form OK and the team is working well. Now we will push for Valkenswaard.”

Rui Goncalves: “I wasn’t happy on Saturday because I hurt my back and my right leg in the first practice. I got cross-rutted on one of the jumps and although I saved the crash I landed quite hard. I pulled a muscle. I could not ride at my best today I was tight and trying to protect my back. I knew it would be a tough one and wanted to survive it with as many points as I could. In the first moto I didn’t ride well but still made it up to thirteenth. In the second I was dead-last but rode smooth and kept on two wheels. I made positions and got up to ninth; that I was happy with. I’ll take this result and sort myself out in the next days. I hope to do some good training and we go to Valkenswaard next. I like the sand and I want to get steady and consistent in the top ten before we can reach forward.”