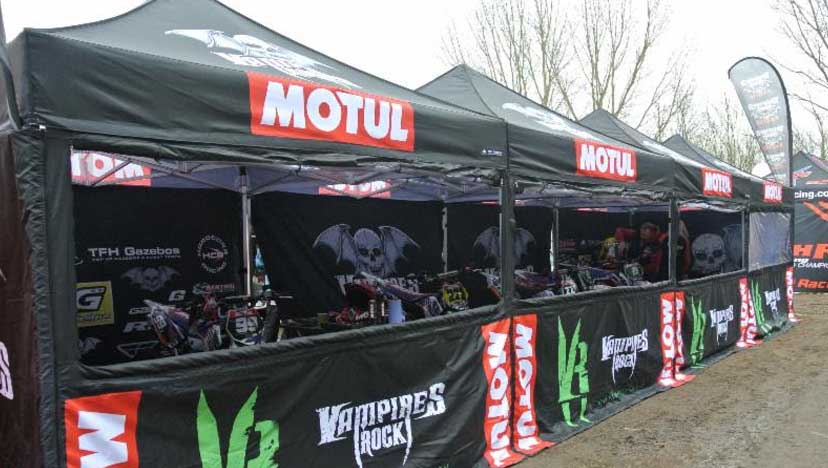 Podium Finish for Jack Grayshon at the GT Cup Nationals

The season kicked off this weekend for the new look Vampires Rock Motul Racing team as they headed to Mildenhall circuit for the first round of the GT Cup Nationals. The weather was perfect for the event which made track conditions ideal and produced some fantastic racing.

The classes were full with 40 riders per class so the competition was high. Jack Grayshon and Ozzie Murray were first up in the ultra-competitive 65 class. Jack got off to a flying start and led the race for a number of laps but was just beaten in the closing stages. He continued to be consistent throughout the weekend with some fantastic riding and finished second overall at round one.

Ozzie on the other hand had a difficult weekend running into several problems along the way. He suffered a broken chain and also a split tail pipe and just was not able to make the break through the weekend. Pulling through from the back in most races he managed to come charging through the pack and finish in a solid top 15 position.

Next up was youngster Jordan Hearn in the Big Wheel 85 class, qualifying in 10th place Jordan was looking set for a strong weekend. He was unfortunate to suffer a couple of bad start but dug deep to work his way back through the pack to finish just outside the top ten on both days.

Steve Steinman – Vampires Rock Racing KTM Team Owner – “I’m really pleased with the way all three riders rode all weekend at the first round of the Championship. It is a long season and I am very sure that Jordan and Ozzie will soon be battling up in a top ten position and Jack will be aiming higher at the top step of the podium! I would just like to thank Motul for the new team camp and for their oil support please to all our sponsors for their continuous support.”