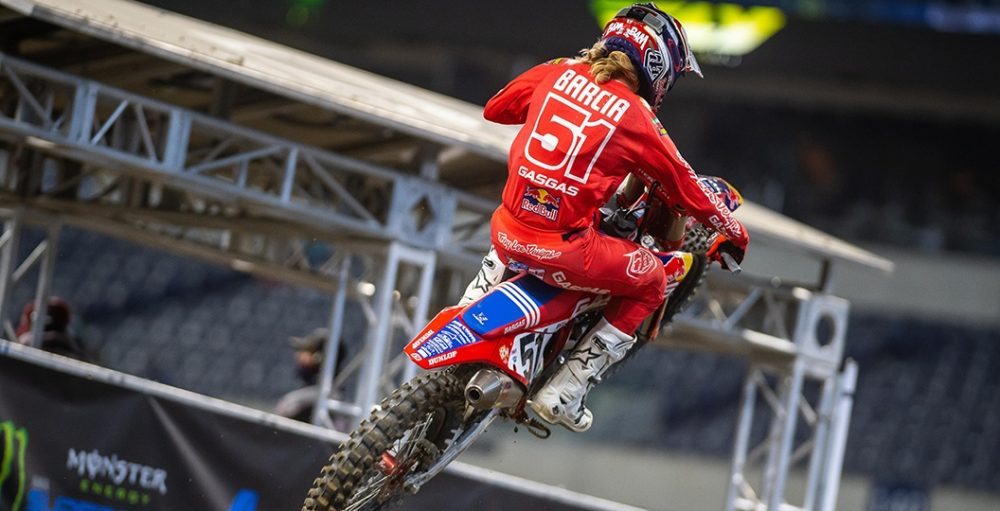 Justin Barcia has taken to social media to recap his evening inside of Lucas Oil Stadium and this quote is a little more candid. With no press conferences this week, it is highly likely that this is all we will get out of #51. Soak it in!

“Well I have a lot to say but will keep it short… The racing incident with Kenny was just that I misjudged the section, slammed my brakes but was to late thankfully nobody went down. I talked to Kenny and he agreed… All good there.

“The lap rider situation is what it is, I could rant complain and so on but that wouldn’t change a thing. Everyone knows the rider and it was completely out of my hands unfortunately. Looking forward to Orlando back in my home state and ready to battle for those wins!”

Justin Barcia continued to cement his position at the front of the premier-class field at Indianapolis 3, round six of 2021 Monster Energy Supercross, as he chased Ken Roczen for the win and kept Cooper Webb at bay for a big portion of the main event. Barcia appeared to be set to take third place, which would have been his third podium in a row, but was cleaned out by a wayward backmarker in the form of Vince Friese.

Barcia was down for a significant amount of time and the situation appeared to be bleak to begin with, but he eventually remounted and limped across the finish in nineteenth. GASGAS Factory Racing has now released an update, which appears to confirm that he is healthy and will be ready to race when the series rolls into Orlando at the end of next week. Barcia even shared the following statement.

“The day was going good, I had my best qualifying position with fifth and I felt like we got the bike working really well and I felt really comfortable out there. The main event was going good, I was battling for the podium and unfortunately had a lapper come across on me and take me out and that’s pretty much how the night ended. It’s pretty disappointing but onto the next one.”

Barcia has dropped to fifth in the premier-class championship standings now; 42 points down on the current series leader. Nine points separate him from the rider in fourth, Adam Cianciarulo.