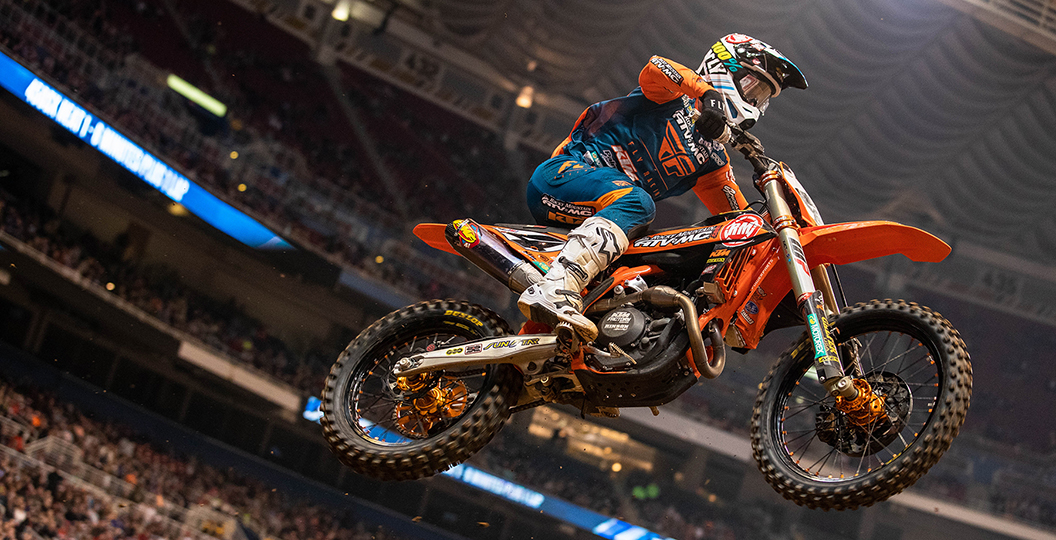 Those watching the seventh round of 2020 Monster Energy Supercross were confused that Blake Baggett did not take part in the premier-class main, despite the fact that he qualified out of the heat race. A crash in that heat caused a nasty case of whiplash that led him to withdraw from the event prematurely. Rocky Mountain ATV/MC KTM just confirmed that he will be ready to race in Arlington, Texas, this weekend though.

We here at Rocky Mountain ATV/MC KTM WPS are very pleased to let everyone know that team rider Blake Baggett will 100% be lining up for this upcoming weekend’s race in Dallas. This news comes just a few days after Baggett and his team made a last-minute decision to pull out from the Tampa main event based upon the rider’s health after very harsh crash on lap one of the heat race.

Upon crashing with another rider on lap one, Baggett himself was hit hard by the bike of a third rider resulting in a severe case of whiplash. He would remount and put on an absolutely amazing comeback ride, earning a transfer spot and closing within less than two seconds of the sixth place of [Jason] Anderson.

Unfortunately upon returning to the team hauler after the race, Baggett’s neck and upper back muscles began to spasm and lock up from the whiplash.  Within a twenty-minute period, and roughly fifteen minutes until the 450 main event gate drop, the muscle spasms and pain had rapidly escalated to a point where Blake could not even hold his head up. After trying everything within the team and Blake’s power, the team made a final decision that it would be both impossible for him to complete the race and not worth the risk of furthering injury. While at the same time not knowing the extent of what could have also been an already potential injury.

Baggett would return home to see his doctor yesterday, and we are relieved to say that there was not any bone, ligament or tendon damage, nor any injury of that matter past a severe case of whiplash and muscle sprains. As of today, the team and Blake plan to take the week very lightly in order to be ready to battle for the podium at this weekend’s Dallas SX.