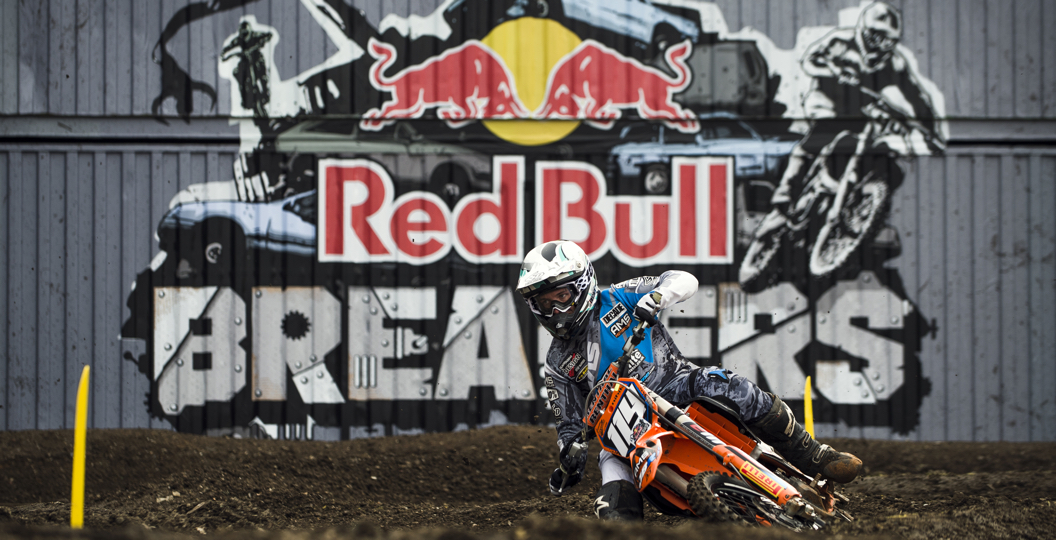 What is Red Bull Breakers? That is the question that a lot of you have been asking, but we haven’t been able to say much until now. We were invited to a scrapyard in Rotherham on Saturday to witness the first edition of the unique event, which was the brainchild of two-time British champ Elliott Banks-Browne.

The concept was different to anything we have seen before, as riders raced head-to-head on a track that consisted of containers, cars, trains and a derelict football stadium. All of these were covered in dirt, of course, but it made for an extremely technical track. Rather than just having to pick a rut and pin it, you had to be methodical with how you went about things – limiting mistakes was key.

The head-to-head races were a little different to what you are probably picturing too, as each rider had a lane and wasn’t allowed to leave that area; it worked in a similar way to the Red Bull Straight Rhythm. It basically stopped each race from turning into a two-lap dash full of block passes and take outs, something that Elliott wanted to avoid. This also led to better racing, as there were more than a few photo finishes; something that is uncommon in traditional racing.

There was one lane that was faster than the other (although for the most part they each featured exactly the same obstacles), but it didn’t matter. At the end of lap one the riders switched lanes, then completed another lap before the chequered flag fell. It worked in a similar way to the ‘Race of Champions’, which was where EBB’s inspiration came from.

So, following each head-to-head race someone was eliminated until we reached the finals. In the end that came down to Jamie Law and Banks-Browne, but the latter just edged out ‘#25’ for the first Red Bull Breakers victory. It was only fitting that he was the man to stand atop the podium, after putting so much effort into the event. Who else took part? Ben Watson, Adam Sterry, Jordan Booker, Nathan Watson, James Dunn, James Cottrell and many more raced, and seemed to love every second of it!

What is next for the event? Who knows, but it is certainly a concept that both Elliott and the guys at Red Bull believe in. It clearly works too! Why was it kept such a secret? This was a bit of a trial run; similar to when they first did Straight Rhythm in 2013. Obviously we all know what that has become, so perhaps this will follow a similar path?