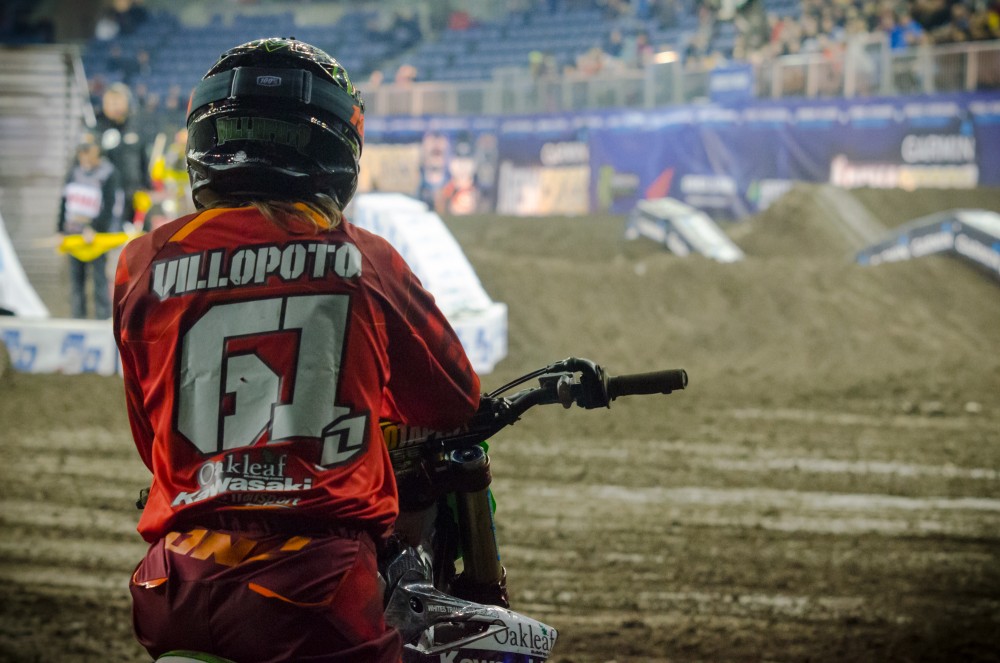 Being the brother of one of the best American riders ever can’t be an easy thing to carry.

And speaking to Tyler you can tell that it has had its advantages and disadvantages, but you still sense an enormous pride and respect for what his brother has achieved.

However Tyler wants to be known as Tyler Villopoto not Ryan’s brother and he is making his own plans to make it as a top rider by doing it off his own back and with the help of his friends.

Tyler is as down to earth and open as they come, despite having a bad night on Friday and a tough practice session today, Villopoto sat down with MX Vice and gave us a frank and honest interview.

We didn’t just talk about his Friday night in Belfast but also on growing up in the Villopoto household where their whole world revolved around motocross in a bid to make it on the professional level.

Read on to discover just what it is like to be in Tyler Villopoto’s shoes.

I’ll start off with last night, it was a tough one – nothing really went right for you!

Yeah last night didn’t go as planned although you can’t really plan anything when it comes to racing. It was bit of rough night, I had some tip-overs, had a holeshot and threw it away, it just didn’t go my way.

I am a bit disappointed but at the same time track conditions are brutal and it seems everyone is flip flopping and on the ground so we are all having our problems.  I will definitely try and turn it around tonight and be in the main for sure.

How do you find the track, is it different than what you are used to?

The format is a little bit different but it is similar to what we have in the states for arenacross. The track itself is just brutal. It is so soft, it is softer than any outdoor track in California!

It’s so rutted and you can tell the guys who live in this area ride in the ruts and mud, they are doing really well, they seem to be loving it. But as the season goes on I plan to progress and get better as it goes.

Are you staying here for two or three months?

Yeah I am staying for two and a half months at Wheeldon farm. My team put me up in a cottage there and I can’t thank everyone enough, Oakleaf Kawasaki for giving me this opportunity and everyone out at the farm that own it.

The atmosphere and everything can’t be any better, I am just taking it day by day and enjoying myself. It’s like being home in Washington, the weather is similar so I am just having fun with it and try and get through tonight in one piece and worry about next weekend.

What about the Jetlag, have you got over that ok?

It’s weird, I flew over and I slept the first two nights decently but ever since then I haven’t slept once! The last three or four nights I haven’t began to sleep for even a second. It’s crazy I feel like an insomniac and it makes it a little bit harder.

But once we adjust it should be better, I just need to get through this weekend and I feel next weekend I can do much better.

Just going back to growing up as a youth rider in the US, it is a lot bigger than the UK and the distances are much bigger, what’s it like growing up in that pressured environment?

There is a lot of stress involved in racing even as a kid. It’s supposed to be fun but when it’s the family business and your grandfather did it, your dad did it then it’s passed on to you. It’s in your blood, everything else is foreign to you. I have been doing it since I was three years old and I can’t see myself ever not being on a motorcycle.

In the states the pressure and talent, not talent but we have the conditions to make the optimal rider because you have so many places to go in the states. California, Florida or Texas is where most of us go, it’s sunny all year. You can be on your motorcycle every day and if you aren’t you can be training.

I’m sure it is way harder over here because it is few and far between to get a good day to go ride and do training on top of it, it’s usually raining so you are going to be in the gym.

There seems to be a lot of pressure on the kids in America maybe more so than the UK?

I think it’s because our amateur circuit is very big. We have Loretta Lynn’s, Ponca City, World Minis, National in Texas in Vegas, there are so many. From a young age kids are brought to all these events and their parents sacrifice everything to travel across the country and spend every last dollar that they have to get them there. They know the pressure is there, the pool of riders – there are just so many of them and they are all so fast. It’s definitely pretty crazy.

What about racing Supercross and outdoor in America are you still looking to do that?

Yeah I have been off the bike for many years and I just got back on it about three years ago. I am just getting my feet wet. I have done the Canadian Nationals for the last two years and US Arenacross plus now the Arencross here. But yeah that is the optimal goal to end up in AMA supercross or outdoors. But I am just taking it day by day and step by step and build myself.

Who knows, I kind of like the atmosphere in Canada and the vibe over here is a little bit more laid back and I think it might suit me a bit better. But at the same time my friends and everyone that has helped me wants me to race the AMA so bad, but I would like to get a bit more time under my belt.

The film that was on Ryan, yourself and your family on CBS, how was that for you to watch back and was it well received?

I got myself to where I am and my friends have got me to where I am at. My family definitely tried to push me away from motocross and not make things any easier on myself. And what that did was plant a seed inside me that I have to do it.

I have had help from them, they have put a roof over my head  and food in the fridge. But the support and mental side of it, I don’t think it’s there like it should be.

Growing up as a young kid and you see what someone else is getting (Ryan) but Ryan pushed so hard to get where he is at, and my family pushed so hard, my sister sacrificed her life and herself to get Ryan where is at it, my mother and father as well, as well as me. We have all sacrificed so much, it is family business and it takes so much to get somebody to that level.