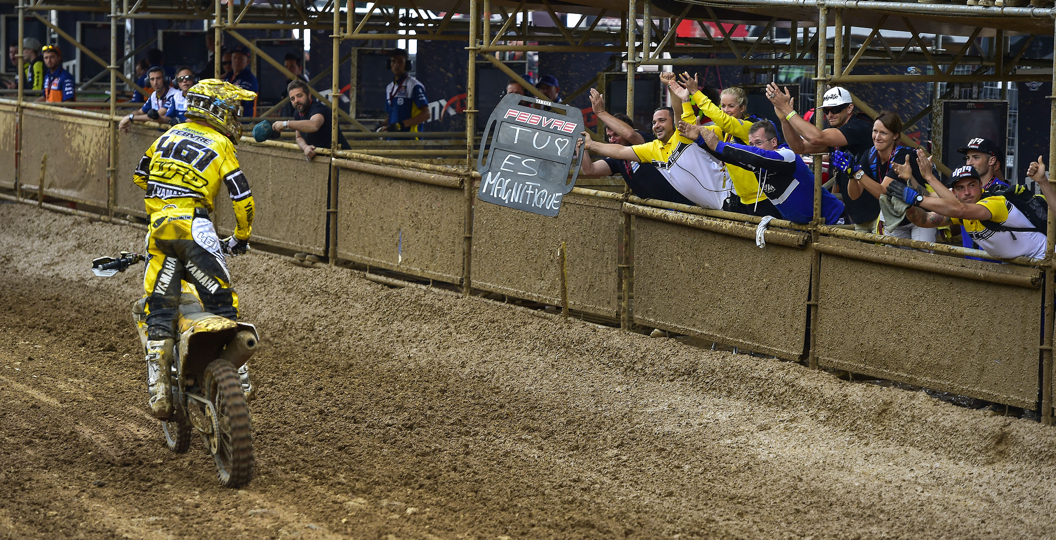 Two in a row for Febvre

Swampy conditions formed the ninth round of eighteen in the 2015 MXGP campaign as Yamaha Factory Racing Yamalube’s Romain Febvre rode to his second win in a row at Maggiora for the Grand Prix of Italy. 36,000 fans elected to ignore the heavy rain showers Sunday morning and travelled to the upgraded and renovated site that was staging the Italian stop on the schedule for the third year in succession. Maggiora actually represented the second trip to Italy for MXGP in 2015 and was the second of three home events for the works team based in Parma. Febvre was again superlative to go 1-6 for the top step of the podium and in the first moto the Frenchman headed a YZ450F 1-2-3 with David Philippaerts and Jeremy Van Horebeek filling the top three.

The Maggiora hard-pack was in place on Saturday as the forecasted rain did not arrive until late afternoon and riders observed that the fast course was relatively straightforward thanks to hardened soil and lack of ruts and berms.

The climate on Sunday was extreme. Thunderstorms and periods of torrential rain threatened to washout the Grand Prix and MX2 warm-up was red-flagged as was the second EMX300 moto. The monsoon eased off by mid-morning and humid temperatures started a drying process on the sodden terrain but dark clouds continued to blow over. Yamaha’s 60th anniversary celebrations coincided with the launch of the 2016 production machinery at Maggiora and the Grand Prix stars revelled in the novelty of wearing the iconic yellow ‘bumble-bee’ livery.

Romain Febvre was nothing short of supreme. The French GP winner slotted in behind Philippaerts as the Italian earned the first moto holeshot and made his move into the lead on the second lap. From there ‘461’ attacked a slick and difficult surface to forge a margin of almost twenty-five seconds over his brand-mate. Antonio Cairoli held third position for a while but his left arm injury meant that Jeremy Van Horebeek was able to pressurise the world champion and soon breached the top three. Three yellow YZ450Fs ran in the first three positions for a picture-perfect scenario.

By the time of the second moto the Italian skies began to look ominous but the circuit remained mercifully dry. Febvre’s race was dramatic. He almost collided with Shaun Simpson on an uphill drag and crashed on the other side of the slope on the opening lap. With his handlebars bent and a broken front brake Febvre was still able to commence an impressive charge back to sixth place to make sure of his triumph by three points over Kevin Strijbos. Philippaerts had his hands full battling for fourth position with the likes of Simpson, Ken De Dycker and the closing Febvre. For fifteen of the seventeen laps the 2008 World Champion had a memorable podium place secured and with his every move cheered by the Italian public. Strijbos’ rally to win the moto on the final circulation bumped DP – who was seventh in the race – to fourth overall but it was still his best finish for three years in the premier class.

Jeremy Van Horebeek was hit by Evgeny Bobryshev on the first corner and had to restart from last position. The Belgian rode really well to cut through the pack and reach ninth place, which fixed him fifth overall for the day.

Febvre’s astounding run of form and results has lifted the MXGP rookie into contention for the championship. He is third in the standings and just 38 points away from the red plate after a gain of 12 over Max Nagl this weekend. Philippaerts is twelfth and Van Horebeek sits in ninth.

Yamaha’s MXGP crew will now travel north and enter the popular Talkessel facility at Teutschenthal, close to the city of Halle, for the Grand Prix of Germany next weekend.