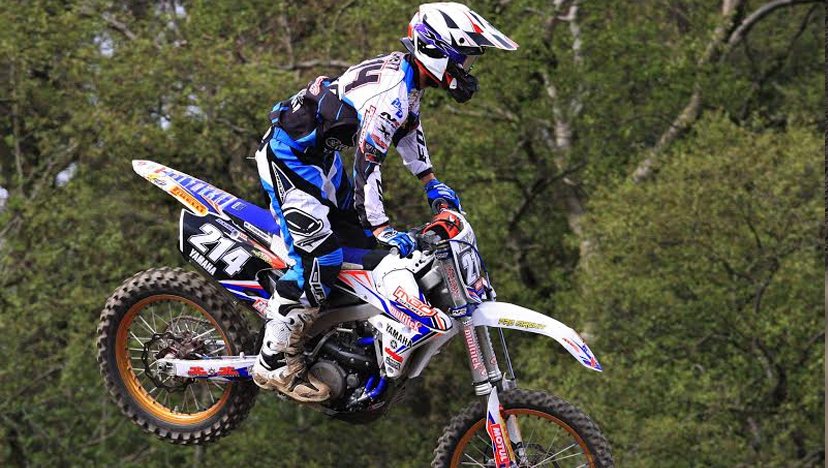 Two out of the three MBO Sport ASA Scaffolding Yamaha team riders made it onto the winners podium last weekend at round three of the new MX Nationals series, as the teams number one rider Kristian Whatley didn’t finish out of the top three all weekend for second place in the MX1 class, while the up and coming Lewis Trickett was a strong third overall in the MX2 class.

The only down side of the weekend was the crash of the teams third member Liam Garland, as after finishing eleventh in the first MX2 race, Liam got it all wrong going over the down hill double jump on the opening lap of race two and had to let go of his Yamaha while it was sideways ten feet in the air.

He cart wheeled down the track with his bike in what looked like a horrific crash, but although slow getting up Liam survived with some bruising but no broken bones.

The changeable weather brought different challenges to the riders each day as Saturday was nice and sunny and the track was hard and dusty, but after overnight rain Sundays conditions where slick and greasy in the morning, but ideal for all the main races in the afternoon.

Kristian gated fifth in the first MX1 race, but within three laps he was behind the race leader and ex British champion Brad Anderson, but catching someone round the mainly one line course was one thing, and passing them was another.

For lap after lap Kristian tried to make a bit of space to affect a pass, till just past the halfway point he made a pass stick and went on to win the first race of the weekend.

In the changing track conditions of Sunday Kristian was struggling with finding the right bike setup, but was fifth going into the first turn at the start of race two and started to make his way forward.

It took a while to pass Jamie Law, but once Kristian had done that the leader Anderson was too far up the track to catch before the end of the race.

With two laps to go series leader Nathan Watson managed to close and pass Kristian pushing him down to third place at the finish flag.

Kristian was happier with the bikes setup for the last race and after gating fourth he past Graeme Irwin at the halfway stage and spent most of the rest of the race fighting over second place with Watson which had the crowds straining to see all the action.

With three laps to go Watson made a mistake approaching the double jump at the top of the track, and Kristian pounced, taking second place from the youngster.

But by this time the leader Anderson had already checked out and with it any chance of a second win for Kristian.

After racing had finished for the weekend Kristian said, “I had a pretty good start in my first race on Saturday in fifth and managed to pass Gary Gibson and Luke Remmer before the end of the opening lap. It took me a couple of laps to find a way past Jamie (Law) and then I set about chasing after Brad (Anderson). We had a good scrap for the lead for a while till I managed to pull away a bit for the win. We have been struggling a bit with suspension setup and it showed in race two where after an average start third was the best I could do. Our setup was better in the last race and after gating fifth I closed in on the leaders and spent a lot of time trying to get past Nathan (Watson) which I did when he made a mistake as we approached the double. By the time I got into second place Brad was already to far down the track to catch so I settled for second in the race and second overall. So not happy with the weekend as a whole, but happy we made progress with the bikes setup”

In the MX2 races Lewis was riding with a new improved confidence that showed in his pace and results as after gating second in the first race, he passed series leader Neville Bradshaw going over the whoops for the first time and lead the race for the first six laps.

Graeme Irwin, who was riding both pro classes, found a way past Lewis at the halfway stage, but the young MBO Sport Yamaha rider hung on to Irwin till two laps from the end where the strain of running up the front of the pack made him tighten and dropped back to fourth place behind Irwin, Bryan Mackenzie, and Bradshaw.

In race two Lewis was fifth going into turn one but quickly passed Bradshaw and Jordan Booker for third place, but Irwin was moving up fast and on lap nine forced Lewis into a crash that dropped him down to sixth where he finished the race.

Lewis was flying in the last race as after passing the fast starting Booker on lap one he held off the talented French rider Steven Lenoir for eight out of the fourteen lap race and came home a comfortable second place, almost eight seconds clear of the championship leader Bradshaw.

After the race Lewis said, “The first race was really good as I got an awesome start and took the lead on the opening lap, but I got a little bit rattled and tense which gave me arm pump and I dropped back to forth by the end of the race, but I am pleased with that as it’s still my first year riding at this level. In the second race I was running a comfortable third when I had a coming together with Graeme (Irwin) and got the worse of that deal and ended up on the floor. I managed to get back to sixth, which still wasn’t that bad and in the last race I was second again at the start and took the lead on lap one. Steven (Lenoir) managed to get past me, but I managed to stay on his pace for the rest of the race for a comfortable second and third overall, which is good, so I am happy”

The next outing for the team will be the Maxxis British Motocross Championship at Canada Heights, in Kent.