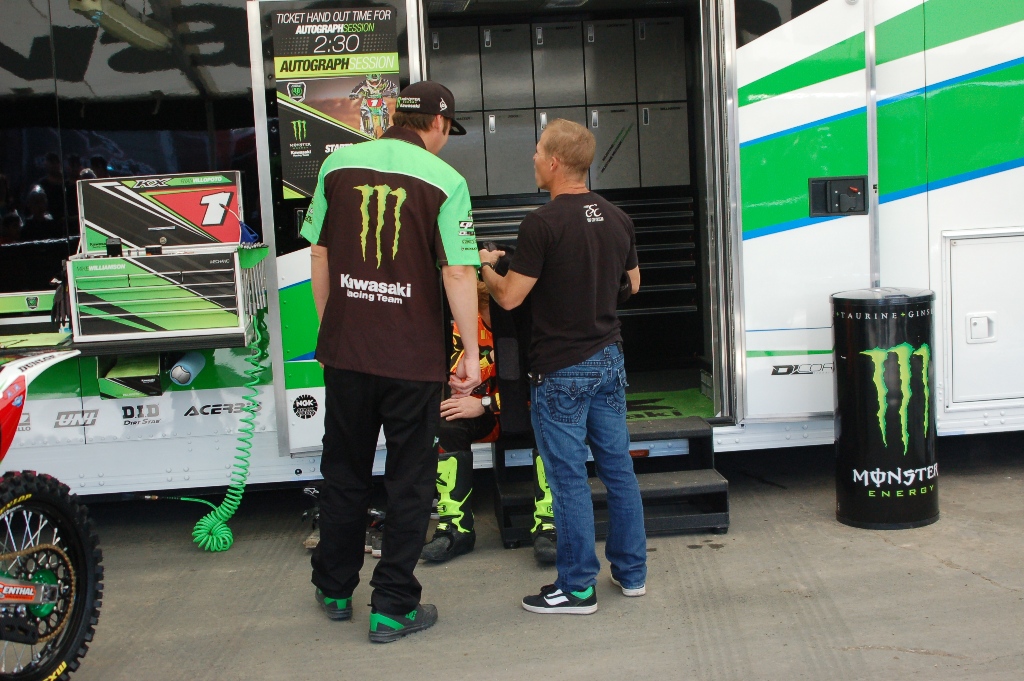 Aldon Baker is the man who changed American motocross.

Before he hooked up with Ricky Carmichael in mid- 2000, US championships were being won on talent alongside a decent level of fitness.

But when Aldon gave RC his training program, Ricky showed everyone that decent fitness wasn’t enough to win anymore. Baker made Carmichael into a machine and since then the best in the business have wanted Baker in their corner.

James Stewart was Baker’s next client who won championships then Ryan Villopoto hired Baker after he struggled initially in 450 supercross. Since then RV has won three straight supercross titles.

The latest big name to join Baker is Ken Roczen, the young German is now training alongside RV and both are helping each other. Baker also trains Pro Circuit Kawasaki protégé Adam Cianciarulo in what is a fast and talented line up.

Aldon was kind enough to give us some of his time after San Diego to talk about his current riders and how he initially got involved with Ricky Carmichael.

MX Vice: You have two riders/rivals now in the 450 class, how does that work out for you with trying to help both equally?

Aldon Baker:  Well it’s good. There was a plan in it to help both them in a way at different stages of their career. I feel it’s a good thing and it’s good for them but it’s also tough on the weekend because racing is racing you know? But from my end as long as there is respect and they understand the race is the race. I don’t have any hassles with that, everything has been pretty good, now if it comes down the last round I might have to sit the boys down! But so far everything has been good.

MX Vice: Ken’s fitness was questioned last year, maybe more so in the heat. How much work did you have to do with him or where was he when you started?

Aldon Baker:  He wasn’t bad for sure but there were areas that needed to be adjusted for a 450 in strength. Then just the intensity levels and the amounts, he has never done 17 rounds on a 450, they don’t quite understand what it is like. It was intense and a lot but it is a great base to build off. I think it went really, really well and it was kind of an eye opener for him but I think he knew this wasn’t the normal 250 deal. This was a longer season and a lot more has to go into it, I think it worked out pretty good.

MX Vice: How is he to work with, he seems a different character to Villopoto

Aldon Baker:  Yeah is very upbeat and excitable in a way which is great. His energy is really, really good and he is really positive. That always helps when you are training, I think for Ryan he is more mellow and Ken helps him, pushes him and I think makes it more fun.  The training is long and hard, the weeks are hard but that has made it a little more fun for sure.

MX Vice: Ryan seems to give you a bit of a hard time in any footage we see!

Aldon Baker:  (Smiles) If they can get a moment to stick it to me they will! I am always the bad guy in a way but those kind of characters like Ryan, when he is like that then it’s good. It’s probably hard for people to see because he is being vocal but in a way that’s good,  my job is to not beat them down but always push and look for areas they can improve on.

MX Vice: How does Ryan compare to Ricky Carmichael?

Aldon Baker:  They are similar in the ways they address things towards racing. But just different in other areas and I think that is because it is just different eras. But overall the way they perceive their training, none of them enjoy that, but they see how important it is to apply themselves when it’s really necessary which I feel they are very similar.

MX Vice: How did you get involved with Ricky at the start? You seemed to really change the face of the sport when you and Ricky joined forces.

Aldon Baker:  I had my background in training and racing (mountain bikes) and I met Ricky once and told him. ‘You are selling yourself short, you are obviously good on the bike but you can be so much better.’ But he only believed that when he went to the bigger class and felt that is what was hindering me.

Then he came back and approached me about what I had said and I was pretty impressed that he came back because I had only said it in passing. But he was willing to say let’s do something and let’s see where it goes. It was more initially a bit of a trial but it went really good and went from there.

MX Vice: Was there a lot of pressure on your end because he was winning so much – you aren’t allowed to lose.

Aldon Baker:  Well that was the thing it was either going to work or it wasn’t. Especially when I changed up his diet, then everyone said I was starving him and things where they believed you eat for energy and all of that.

So when I cleaned that all up there was a lot of pressure, it was like, ‘If this fails, you’re gone.’ But not so much from Ricky but more the group that was a around him. But I was confident  that it would be better, but it was still a little bit nerve wrecking because if it didn’t it would have ended right there.

MX Vice:  What is your assessment of Ken and Ryan’s season so far, they are 1-2 in the points so it’s a perfect scenario for you!

Aldon Baker:  It’s good but it’s still early. But I think getting out of the West coast and heading to tracks which are more race-able is a perfect scenario. You look at every weekend as individual, you look at Chad tonight, it just takes one little thing and you can screw it up. So that consistency and staying on everything is tough, but so far it’s great and I hope we can keep building on that.

MX Vice: How do assess each rider’s program?

Aldon Baker:  Well everything is individually recorded so they have they own ranges or heart rates and everything else. So that is all individual, they may do the same stuff but the actual heart rates are different and each one has their own ranges they need to stay in depending on what they are doing. I try and get them especially on the track riding today but they are times when one will be a little bit different to the other.