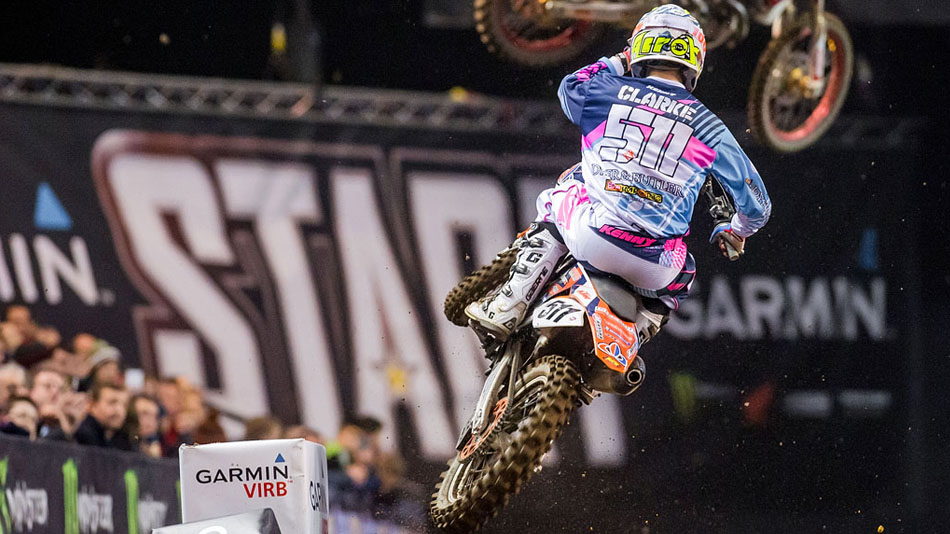 Tough weekend for Dyer and Butler KTM in Liverpool

For round four of the Garmin Arenacross UK Tour, Dyer and Butler KTM headed north to Liverpool for the first of two Sunday afternoon events. After a weekend of damage limitation in Birmingham, the team were looking for much better results inside the Echo Arena.

With a new track layout and surface to learn, both Steven Clarke and Jamie Law headed onto the track early to get themselves dialled in. After the practice and two qualifying sessions both riders had posted some consistent times to finish in 8th fastest and 18th fastest for Steven and Jamie respectively.

When the lights went down and the opening ceremonies finished, the riders headed to the gate for the opening heat and in the first heat of the night both Jamie and Steven lined up together. Steven Clarke produced a great start to end the first lap in second and quickly move passed Bradshaw for the lead only to crash in the next turn and remount in last place. Following a steady start, Jamie was able to stay out of trouble and finish in fifth place. As the race went on Clarke moved forward but suffered another crash and finished in 8th place.

The second set of heats didn’t see the Dyer and Butler pairings luck improve much with Clarke crashing on the first turn in his heat and finishing in 11th, while Law had to avoid Kristian Whatley’s crash and was left fighting in 10th place at the finish.

After suffering bad luck in both heats, Jamie and Steven were both forced to line up in the LCQ. When the gate dropped Jamie started 3rd and Clarke in 4th and as the race progressed both riders put pressure Anderson in second and on the last corner Law made a move to take second and final transfer spot to the Main Event with Clarke missing out in fourth.

Following his late transfer to the main event via the LCQ, Law had very little time to prepare. From his outside gate position he was pushed wide and rounded the first lap in 9th place. During the race Law pressed hard to move forward but made a mistake in the closing stages to finish down in 12th place.

Clarke and Law will now regroup during the next 7 days as they prepare for round 5 of the Garmin Arenacross UK Tour at the Metro Centre in Newcastle on the 9th of February.

Jamie Law: Tonight was pretty good, I wanted to get two clear results to transfer direct to the Main but that didn’t happen. Then in the LCQ I was in third place behind Brad and managed to line him up and make the pass for transfer spot. Then in the Main Event I made a small mistake which ruined the result but I’m happy with the way I was riding.

Steven Clarke: After getting to grips with the loose and sketchy track conditions through practice I lined up and pulled a good start in the heat. After passing Bradshaw for the lead I made a big mistake putting me into 8th. Then in my next heat I got taken out in the first turn and it was a long race from then. The LCQ came around and I was almost far outside gate but managed a decent start into 6th and passed into 4th behind Jamie and Brad and struggled to make any moves in such a short 4 lap race. I was hoping to get the promoters choice into the main as I was 3rd in points but sadly that didn’t happen and hasn’t happened since Round 1 in Belfast.  Anyway onwards and upwards as I’m still healthy and ready to fight for next week’s race!

Richard Clarke: (Team Co-ordinator) After a lot of adjustments to Steven’s bike through qualification he was happy with his set up for the main show. Both riders coped well with what I thought was the toughest track conditions so far on the Tour. After four laps the whoops were none existent. Both riders were well disappointed by the end of the night but they remain fit and well. Steven has dropped to fifth and Jamie to eleventh in the championship and we hope next week is a lot better.