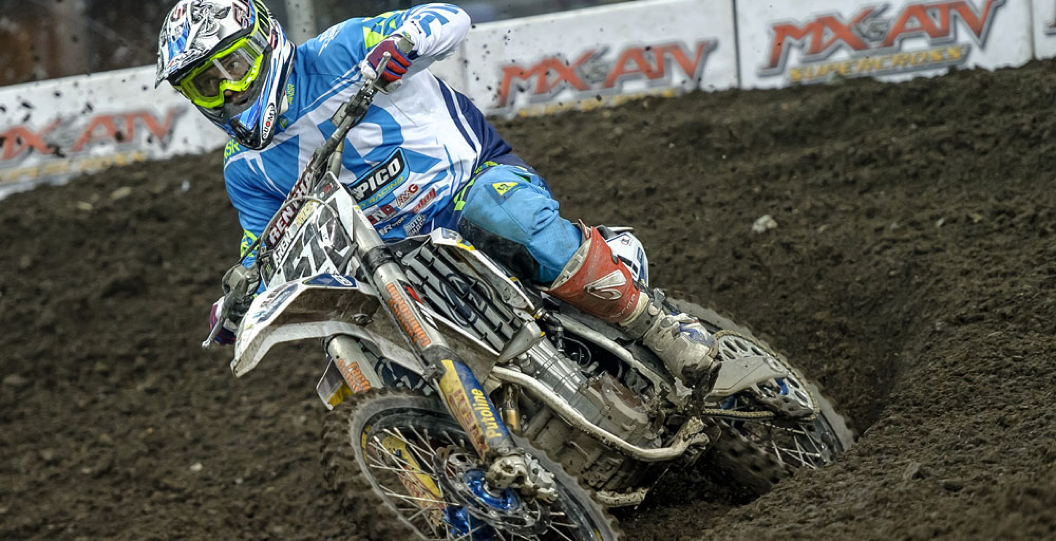 The past weekend saw the Apico Husqvarna Motorcycles team cross the Irish Sea to Belfast for rounds two and three of the 2015 Arenacross Tour. After a steady opening round the team were looking to improve over the two nights.

Practice and qualifying for Friday saw Steven Clarke suffering slightly with a pain in his ribs following a small crash the previous week, but was still able to produce a few fast laps to qualify twelfth fastest with team mate Franklin Nogueras fourteenth fastest.

Friday evening started with both Steven and Franklin in the second heat and it was Clarke who started well in third place but collided with Loic Rombaut on the opening lap and went down. The crash allowed Franklin to move into third place and was riding well for the first half of the race until a couple of small mistakes saw Franklin slip back to fifth at the finish. After his early crash Clarke attempted to salvage a result finishing in eighth place.

The second block of heats saw Clarke suffer a bad result in the third heat after starting the heat from the outside gate, Clarke managed to regroup towards the end of the heat and finish in seventh place. The fourth heat saw Franklin suffer a bad start but was able to recover well in the second turn to jump into fifth. Unfortunately a crash late in the race saw Franklin drop to ninth before finishing seventh at the flag.

After the tough heat race neither Steven nor Franklin transferred directly to the Main Event and had to line up in the LCQ. Unfortunately more drama was to unfold on the opening lap when both Steven and Franklin collided with Steven going down injured. The race was then Red Flag due to another serious incident on the track. In the rerun only Franklin returned to the track but crashed while in a transfer position ending the teams evening early.

After Friday night’s disappointment the Apico Husqvarna Motorcycles team were looking for a better result, unfortunately although being given the all clear, Steven Clarke was unable to ride due to the pain and discomfort in his upper arm and shoulder. In the qualifying session Franklin posted a strong time to finish tenth fastest.

In the evening, Franklin lined up in the first heat of the night and made a solid start in second place and was looking good early on. As the race progressed Franklin suffered a couple of small mistakes and would slip back to fourth at the finish. Franklin’s second heat of the night came in Heat three and saw him start in third place before slipping back to fourth on the opening lap. Franklin soon recovered into third place but a mistake in the whoops saw him back in fourth. In the middle of the race Franklin was under pressure from Romain Biela, the pair both took advantage of Banks Browne bike misfortune and on the following lap Biela crashed leaving Franklin with a comfortable third place finish and a transfer to the Main Event.

Before the Main Event Franklin headed into the Head to Head but unfortunately was beaten in the first round. In the Main Event Franklin made a strong start but was pushed wide in the second corner and lost a few positions. In the opening laps Franklin was riding well in 8th place until a small slip off dropped him to twelfth place at the finish but it was still more solid points on the board.

Steven Clarke: it’s been a rough weekend, I came into the event with some pain in my ribs and rode badly in the heats. Then in LCQ I got a good start but me and my team mate collided in the first rhythm section and landed heavily on my shoulder and that ended my weekend. I’ve not had it checked at the hospital but I will go and have some test done on Monday to see if there is any damage.

Franklin Nogueras: Friday night is a night I’d rather forget as I made too many mistakes and missed the Main Event. Then on Saturday night I came back and was looking to make a mends for the team. I rode well in the heats and got a 4th and a 3rd and transferred to the Main Event. Unfortunately in the Main Event I got taken down but that is racing and we will be back again next week. I really can’t thank my team enough for all the support and the great bike.

Richard Clarke – Team Manager: Friday night was a really tough night and most people will have seen the videos and footage of what happened in the LCQ and hopefully Steven will be ok to race next weekend in Birmingham and we will get his shoulder checked on Monday. Then on Saturday night Franklin rode great and kept us in the event as a team and produced some good results to get into the Main Event. In the Head to Head Franklin was unlucky and then in the Main Event he made a good start and was in 7th until he was taken wide in a corner and went down which was a great shame but I’m please for him and the solid points for the Championship.