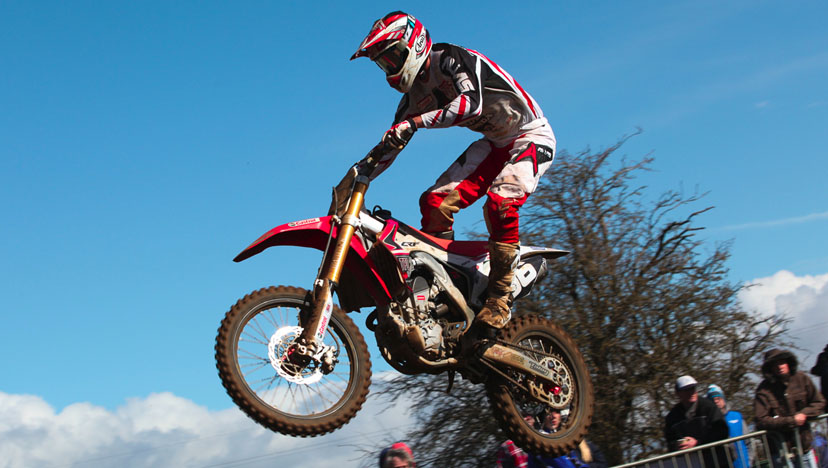 Tough start to the inaugural MX Nationals for JAR Honda

The last week has been a bit of an upset for many teams in Britain, and this also includes JAR Honda. Although the loss of the Red Bull Pro Nationals will be felt by all, JAR Honda’s plan had already included the new MX Nationals series, and it is to this series’ first round that JAR Honda’s Lewis Tombs made his way on Friday evening.

Saturday morning dawned to sunshine and a wet track and as part of the second group of Pro riders, Tombs got his first taste of Culham of the year. Just before noon, the groups went out for their qualifying session; Tombs qualified twentieth overall.

The first race of the weekend got off to a mid-pack start, but Tombs made steady progress towards the front, only to have a technical issue force him out with only two laps to go. Bike repaired and polished, Tombs went out on Sunday morning for two sighting laps before getting into position on the start gate. Again mid-pack into the first corner, Tombs soon found himself within grasp of the top ten. After crossing the finish line in eleventh, it transpired that he was in fact fourth in the MX2 class. The final race of the weekend was tough. The sun settling to the west made some sections more difficult, and to make matters worse, a technical issue forced Tombs to compromise and settle in eleventh place, although several MX2 rivals were in touching distance.

Once all scores were tallied up, Tombs finished the weekend seventh, a respectable starting point for the season.

It was a good weekend, I found some good pace, in the first race I was doing ok, I was thirteenth overall and sixth MX2, then I had a bit of a problem on the last few laps and didn’t actually finish, so that was a bit disappointing. But the second race much better, I didn’t have a good start but I pushed hard in the beginning half of the race, gained some good positions and got into fourth MX2, which was about eleventh in the race, and then just seemed to stay there. The second half of the race I didn’t ride all that great, the arm pump was just horrendous, but nonetheless it was a good result. In the last one I had another bad start and just pushed on again for as much as I could. I had a good scrap with Bryan, and Adam, I started to catch Lewis Trickett towards the end but unfortunately something happened to my header pipe, so I lost a lot of power and I thought I’d just try to nurse it home and I think I got seventh MX2. Overall it was a good weekend and I’ve kind of caught the gap up towards the group in front of me last weekend. I’ll keep pushing on and get up the front for Lyng.

We had some mechanical problems this weekend which affected our overall. However, Lewis was riding with a lot more confidence and feels more comfortable on the bike. We are getting stronger race by race and chasing our target of a podium. We can leave here with a lot more positives than last weekend.