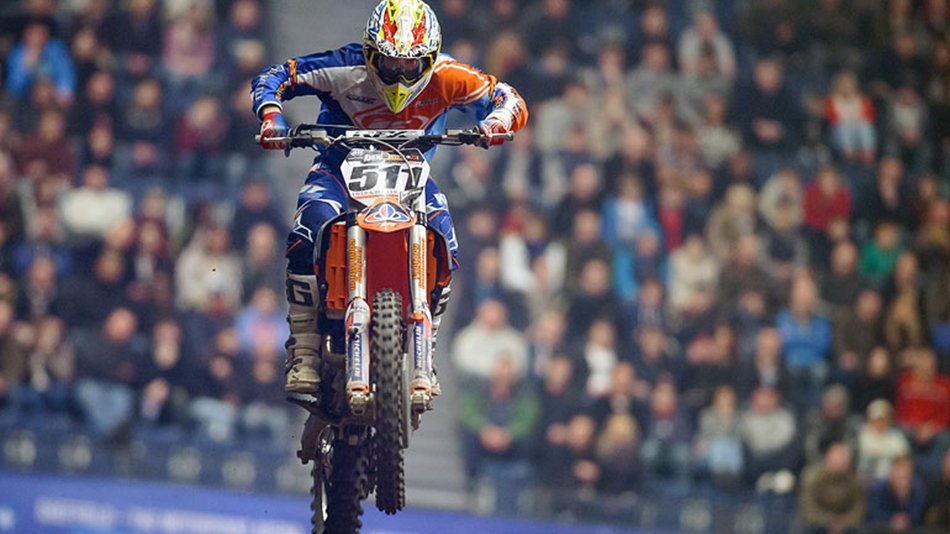 Tough night in London for Dyer and Butler KTM

After the disappointing results at the last round of the Garmin Arenacross tour, Dyer and Butler KTM headed to the Wembley Arena for the final round. Steven Clarke returned to racing after resting his wrist for two weeks, while Jamie Law sat out the final round and was replaced by Ross Hill.

During the qualifying sessions, Steven took a few laps to get back into the swing of things before qualifying 11th fastest going into the evening show. Debutant Ross Hill used the practice and qualifying time to get settled on the tight Arenacross track and qualified in 20th place.

Once the evening show started Steven began to feel more comfortable on the bike and ready to challenge for the keys to a new car. In his first heat he had to ride hard as a problem with the start caused it to not drop correctly and saw Clarke hit the gate. After setting off dead last, Clarke rode well and pushed hard to recover to seventh place. In his second heat, Clarke again missed the jump off the start and had to worked hard to finish 4th.

Team mate for evening. Ross Hill suffered a rough introduction to the Garmin Arenacross Tour when he crashed heavily on lap 3 of his first heat. In his second heat Ross rode much better to finish in 9th place and a trip to the dreaded LCQ.

The LCQ saw both Clarke and Hill have to battle it out for the remaining transfer spots to the main event. When the gate dropped Clarke fired into the lead and dominated the race to take the victory, while Hill would battle hard to finish in finish in seventh place and missed out on the Main Event.

In the main event, Clarke made another bad start and had to ride hard to move into 9th place on the opening lap. Once in 9th place, Clarke was engaged in a race long battle with Luke Arbon and gained the ninth place at and the end of the night.

Although the result was not what Clarke needed to secure the car, he did manage to compete without any major pain from his recent wrist injury and felt comfortable on the bike and ready for the first outdoor event.

Steven Clarke “I’m a bit disappointed with the result, but it’s a goal achieved within its self, as on Friday I wasn’t even sure if I could ride. Once I got the all clear from the MRI scan I had to just take it step by step and push through the pain. I’m gutted I’ve not won the car but I’m in one piece and now look forward to Landrake for the first British”

Ross Hill “I really enjoyed it, got thrown in at the deep end a bit as I had not rode the bike before. I managed to get faster as the night went on, but it was a shame I went down in the first heat. I also very thankful of Dyer and Butler KTM for giving me a chance.”