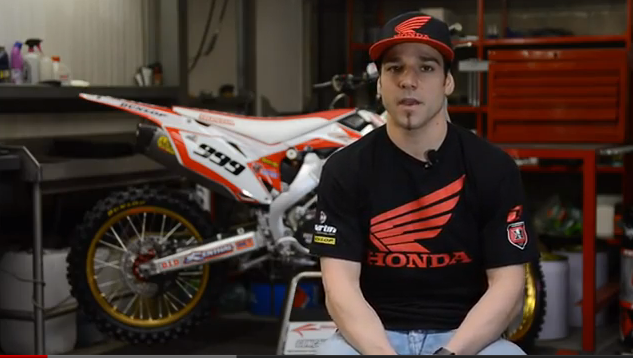 The Honda World Motocross team is heading into the final stages of the season this weekend with round 14 of the MX1 World Championship, which is being held at the notoriously tough Lierop track in The Netherlands.

Lierop has hosted major events since 1996 and despite being omitted from the series calendar last year, the Grand Prix of Benelux is set to be a great weekend with the army of Dutch fans expected at the race. The track is known for its notoriously tough terrain, which will put the racers to the ultimate test in the demanding loamy sand and it will be important for riders to stay focused throughout the weekend.

Honda World Motocross riders Evgeny Bobryshev and Rui Gonçalves have been training in the sand in Belgium this week with their factory CRF 450R machines in preparation for the race, where they hope to begin their season closure on a high during one of the final three events to go.

We would like to offer you a video preview of the event with comments from both riders and Honda World Motocross Team Manager, Lorenzo Resta: please click here

“Going into this weekend everything is okay, but I still have some pain in my left shoulder after the practice crash in Matterley Basin a week and a half ago. It gets a bit tired and it hurts, but I’ve had some treatment on it this week, so I hope by the weekend it’s feeling a bit better. We are going to stay focussed and do everything we can to have less pain to make it easier to ride. I like the track there, but it’s one of the roughest on the World Championship calendar, and for sure by the second moto it’s going to be hard work. So we will go with a positive attitude, and aim to put in some good sessions. The fans are also close to the track, so it’s a good atmosphere and a race I’m looking forward to. I’ve been training in Belgium this week both on the bike and with my physical programme, which has been positive as we head into the weekend.”

Evgeny Bobryshev #777?“I am really pumped to go and race at Lierop, as it’s a nice track with a lot of people there. I’ve been doing a lot of training in the sand since Matterley Basin, as well as a change of programme with my physical training to bring on my strength, which is important for this race. It’s going to be rough weekend, so on Saturday I need to be a bit smart to conserve the energy to give my all on Sunday for the results. I have had a good few weeks with the training, but the main thing for me is that both mentally and physically I am improving with everything after all the problems we’ve had this year. I know it’s close to the end of the season, so my main aim is to take each session and moto as it comes to do the best job possible.”