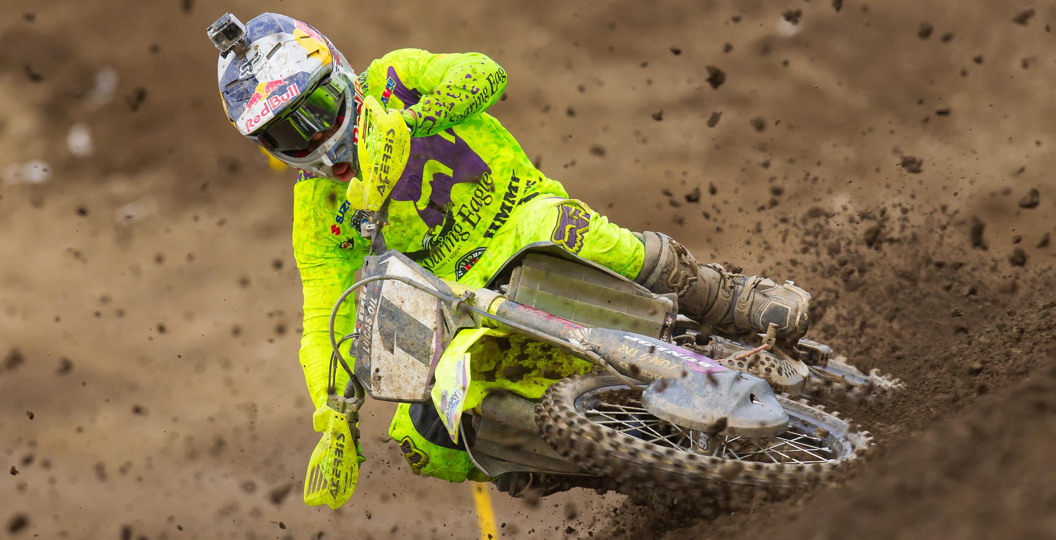 Top five for Roczen at Unadilla

Despite the top-five showing, RCH Soaring Eagle/ Jimmy John’s/ Suzuki’s Roczen slipped to third in the championship battle where he trails second-place Justin Barcia by 13 points. Tickle is currently seventh in the standings with only 14 markers separating him from the top-five with two races remaining in the 2015 outdoor campaign.

Roczen battled adversity early in the first moto after getting together with Christophe Pourcel. The contact caused the 21-year-old to fall resulting in damage that forced Roczen to visit the mechanic’s area and allow his team time to fix his Suzuki RM-Z450 as best they could so he could finish the moto.

Despite the circumstances, Roczen rallied from deep in the field to ride all the way back to 16th and earn as many points as the situation would allow.

“My day was alright,” offered Roczen. “I had a little bad luck in the first moto. I didn’t grab the best start and (Christophe) Pourcel crashed in front of me and I ‘endo’d’ right there. My front brake was bent really badly and I think that was letting a lot of air into the system. After the first lap, I pulled in real quick and they bent it back but I still didn’t have any front brake for the first moto. It’s kind of tough because of that screwy U-turn. I just had to plough into the soft dust so I could actually stop and turn the bike. It’s tough to ride without a front brake at Unadilla but it is what it is.”

The defending Pro Motocross Champion proved his mettle in the second moto where he rebounded admirably from his earlier misfortune to notch a runner-up effort.

“I put it all on the line in the second moto and got a lot better start,” Roczen continued. “We battled with (Ryan) Dungey the whole way. The second moto was a really fun race. I should have switched my line in a couple of places on the track, especially right before the finish line, because that’s where he always gained on me. It was a good race. Ryan really rode well. We made some changes to the bike that helped me turn. Overall, it was a better weekend for me. It feels good to be back up front and battle it out.”

Tickle was pleased with his effort and quick to point out that the team’s testing sessions over the off-week paid dividends.

“We had a pretty good day,” explained Tickle following the event. “My starts weren’t the best but I felt like I was strong in the first moto. It took me a while to get around (Josh) Grant and once I did I passed three or four guys and got to sixth. I was pretty pumped with it because that’s the best I’ve felt all year from the middle of the moto until the end.

“Second moto played out basically the same way. I was just a little further back on the first lap. I was behind Grant again, for probably 25 minutes, and then I made the pass on him. I passed one more guy and that’s about all I could catch. Everyone else was too far gone. We had a 6-9 for sixth overall and gained some points. It was a positive day and a good bounce-back from Washougal. We made some changes to the bike during the week off and everything worked well. I’m looking forward to Utah next week and Indiana to close out the season. I’m going to try and finish out strong and hopefully we can pick up a couple more spots in the points.”