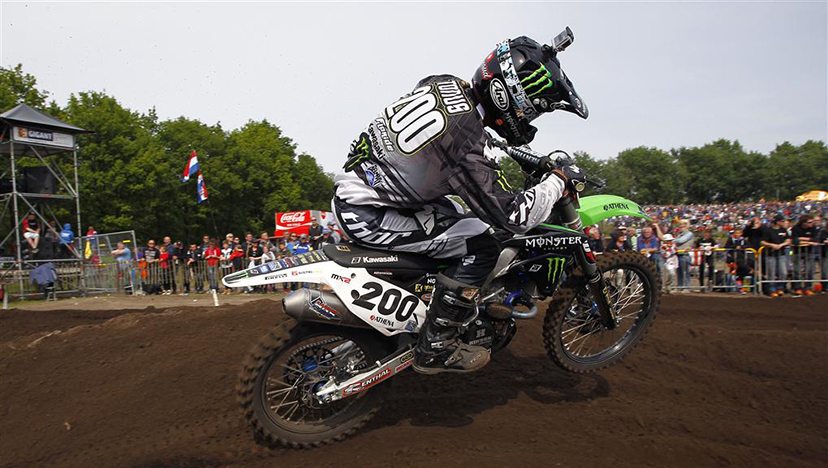 Tonus stays in the title hunt

Arnaud Tonus of Team CLS Kawasaki Monster Energy showed resilience to hit back with second place in the second moto of the Dutch MX2 GP after a crash at the start of race one cost him the series lead.

The Swiss ace, holding a slender points lead at the start of the weekend, knew in advance that it would be difficult for him against the local sand experts in the sixth round of the FIM World MX2 Motocross Championship at Valkenswaard, and his task was rendered even more strenuous when he fell at the second corner of race one and had to rejoin at the tail of the pack. Within little more than a lap he had advanced into the top 15, only to suffer the misfortune to be hit by another rider, the impact forcing him to fall once more. Once more remounting in last place he battled his way through the pack to take the chequered flag in twelfth place. He escaped trouble at the start of race two and quickly advanced from fifth to fourth in a fast-moving pack. After battling for several laps with CLS teammate Dylan Ferrandis he eventually got the upper hand and triumphantly ended the day by riding round the rival in second place at the final corner. Fifth overall on the day despite the unfortunate opening race, Arnaud has surrendered the championship lead but is still a secure second, just 15 points from the new pacesetter.

CLS teammate Dylan Ferrandis also showed the skills and commitment which have taken him to fourth place in the championship as he battled through from a first corner melee to finish a commendable eighth, and followed this up with a fine fourth in race two, only surrendering third to teammate Tonus on the final lap of racing. The results gave him sixth place overall in the GP, with the same points score as Tonus, and saw him  maintain fourth in the series standings.

Thomas Covington knew before the weekend started that he faced a severe task as he had never raced such a sandy track in his native USA but he was advancing impressively from a 25th placed start to hold 21st before a crash dropped him downfield for an eventual 29th placed finish. Gating strongly in race two he forced his way from eleventh to ninth before surrendering two places to sand specialists in the closing stages. He has now advanced to fifteenth place in the series.

Tommy Searle postponed his intended comeback in the MXGP class after he realised on Sunday morning that he still lacked a degree of flexibility in the wrist he had broken eight weeks earlier in Thailand. Not wishing to risk a further layoff by racing the ultra-rugged sand track before he had regained full strength and movement in his right wrist, he decided to delay his racing comeback until next week’s Spanish GP, even though he had shown good speed to set the twelfth fastest time during the morning warm-up.

Arnaud Tonus: “I had a good qualifying race on Saturday, even though I felt tense on the bike. Today was different. I slid and crashed in the second corner at the first start; I was back in the top fifteen after one lap, but then another rider hit me in the back and I crashed again so I was last and it took time to find a good rhythm again. Twelfth was not so bad after two crashes but I lost many points. In the second moto I conserved some energy as I knew that the race would be tough, and in the last four laps I passed Dylan and Febvre to finish second. Of course I’m a little bit disappointed to lose the red plate, and there’s still some work to do to be even stronger.”

Dylan Ferrandis: “We had some troubles to set up the suspension on Saturday, but we managed it in the end; unfortunately I was not so lucky in the qualifying race as I got some plastic in my rear wheel and finished the race without any rear brake. My start was good in the first moto but there was a huge pile up in the first corner and I had to come back from nearly last to finish eighth, not so bad on this track. I saved some energy for the second race, my start was good and I had a great battle with Tonus and Febvre for second place; I had no rear brake in the last five laps, but that was not so much of a handicap on a sandy track as it would have been on a track such as Bulgaria and I could still finish fourth.”

Thomas Covington: “I definitively expect something special here. I knew if would be tough but it wasn’t too bad this weekend, even if I had a pretty big crash in the first moto. But in the second moto I got a good start and was in the top ten for most of the race. I think it’s good for my first experience in the sand; hopefully I will be more used to the sand when we go to Lommel later this season for the Belgian GP. We did a lot of testing the past two weeks and I’m really happy with the whole set-up, the team and the awesome bike; it’s so fast with great suspension, and I couldn’t be happier with the Kawasaki CLS Monster Energy team.”

Tommy Searle: “The main aim here was to get through the weekend. I’ve only been on a bike five times since my crash in Thailand and my wrist aches a bit, but my doctor told me there is no danger of damage and it’s better for me to ride or it will get stiff. I set twelfth best time in Sunday morning practice but I still have some restriction in movement in my wrist and it would have been too risky to race on a track as rough as this.“