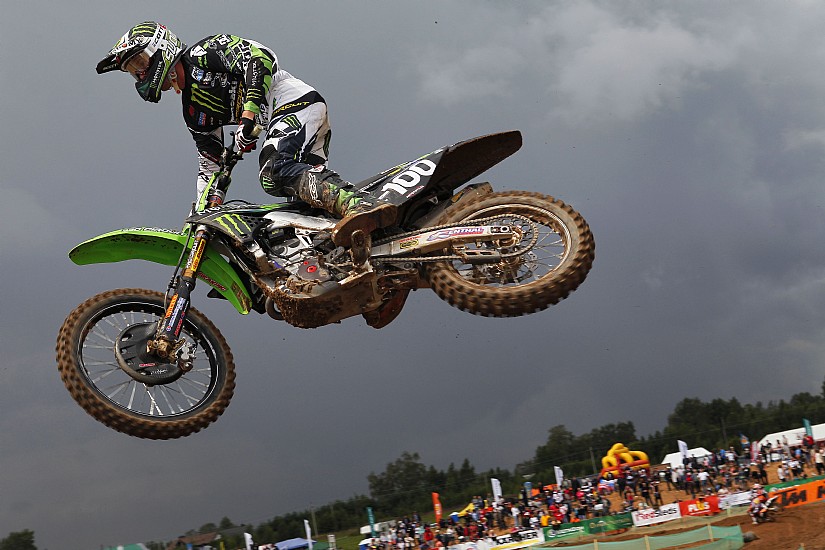 Tommy Searle overcame misfortune to finish second in the eleventh round of the FIM World MX2 Motocross Championship at the sandy Semigorje track on the banks of Volga in Russia.

The Team Floride Monster Energy Kawasaki Pro Circuit rider was in superb form throughout practice, but suffered terribly bad luck during the rain-affected qualifying race to decide grid positions as another rider crashed in his path and he was forced to retire with a damaged radiator. The resultant outside gate meant that it was virtually impossible to get a good start and the English rider twice had to fight from outside the top 20 to finish 3-2 in the motos for second overall. Unfortunately this misfortune left his chief rival for the title to score an unchallenged double victory and Searle now trails by 49 points with five GPs remaining.

Teammate Joel Roelants also showed podium pace all weekend, but chunks of drying mud which clung to the spokes of the rear wheel as the sun came out for race day caused him to pit to check out the reason for the strange handling after he had chased the leaders through the early laps of race one. Despite the stop the Belgian finished fifth and, together with a fighting fourth in race two as he battled stomach pains, saw him narrowly miss the podium.

Dylan Ferrandis of Team Rockstar Bud Racing Kawasaki continued to show that he is learning rapidly in his first full season of GP racing as he raced to eighth overall to consolidate his ninth place in the championship, while teammate Valentin Teillet put up a gutsy performance on his return to racing from injury to end the GP eleventh overall despite inevitably feeling tired during the closing laps of race two.

Tommy Searle: “My chances of winning the GP disappeared yesterday when another rider crashed right in front of me during the qualifying race. I turned to miss him but the radiator was damaged by his handlebars so I had the outside gate for the GP and it was impossible to get a start in the top 20 from there. I used a lot of energy to come through to third in the first moto and the first two were too far ahead to catch, but as usual I was even stronger in the second race. Another rider lost control at turn two and we crashed together, so I was completely last, but I never stopped fighting and took second place with a coupler of laps to go. It’s hard to accept the bad luck I have had this year, but I will keep fighting for the title even though it will now be difficult.”

Joel Roelants: “I got a decent start in the first moto and was chasing the leaders but after a few laps I had a strange feeling with my back wheel and I came in the pits to check it out; in fact I had some mud on the wheel and it affected my riding. I lost several places but was able to fight back again from eighth to fifth. In the second moto I had stomach pains but still managed to get fourth position.”

Dylan Ferrandis: “I felt good on the track in practice, but it rained for the qualifying race and I stalled the engine in the first corner. I recovered to finish fifteenth so that was not too bad for the choice of gate. Today was dry and sunny and that was great and I battled with Tonus and Osborne for most of the first race to finish eighth. I got out of the gate second in race two but Van Horebeek cut across my line and I lost a few places; afterwards I crashed twice, but I had some good lap times and finished eleventh.”

Valentin Teillet: “For a comeback ride it was not so bad, even if on Saturday it was pretty difficult for me with the mud. I knew that I was not really ready for racing at this level as I only rode one time before I came here, but the goal was to finish both races and I did it. My first start was bad but I came back through to finish eleventh, and in the second one I inevitably felt tired but still scored a twelfth position. That was a good first step in my comeback and I can be happy with the result; but for sure I will expect more in the next GPs !”