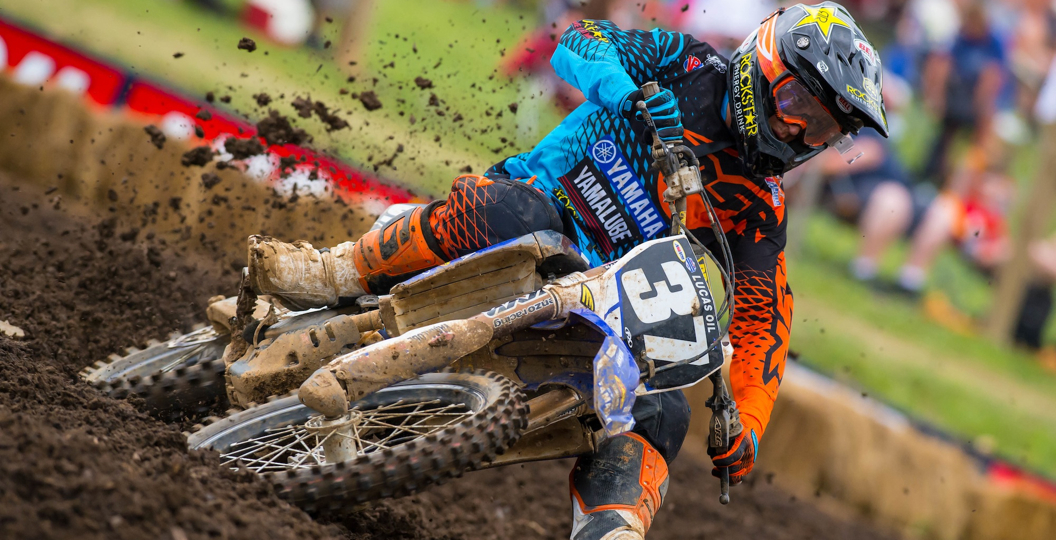 The opening 250MX moto at Muddy Creek was arguably the most exciting race that we have seen so far this year, as Blake Baggett made a pass for the win on the face of the finish line jump, and edged out Cooper Webb by less than a second! Both riders rode fantastic, but it was clear that Blake was the faster ride in the closing stages. We actually saw flashes of the Blake Baggett from 2012, which is bad news for his competitors – he was unstoppable that year. If he can find a way to harness that, he is going to be extremely tough to beat.

It is somewhat surprising that Blake started right behind Cooper, and did not make a move until the final corner, but as usual he appeared to get stronger as the race progressed – that’s just what he does! For a couple of years now, many pit pundits have attempted to understand how he manages it, but no one really knows. In the chart above, Blake was faster than Cooper on every lap, so he was consistently chipping away at the gap. When you couple this with the fact that Cooper was attempting to win his first ever race, the Star Racing Yamaha rider must have been feeling a lot of pressure.

I do not think that pressure was the reason that he lost the race, although it may have contributed to how quickly his advantage deteriorated. But, make no mistake about it, Baggett was charging extremely hard. In fact, his final lap was his fastest of the race, which is commendable. The final corner at Muddy Creek is notoriously tough to defend – Adam Cianciarulo put it perfectly on Twitter: “You have to protect the inside, but that opens up the outside for a banzai move.” It also looked like the line that Webb took was beaten up, as he hit some kind of hole on the exit of the turn, which halted his momentum.

I have gone on about Blake Baggett, his fitness and the way he charges at the end, but let’s not overlook how Cooper maintained his pace for the duration. He too dropped his lap time on the final lap, so he had plenty more to give, which bodes well for the rest of the series. Muddy Creek was his home race, we must not ignore that; he has logged plenty of laps around the track. But, he has proven at the other rounds that he is capable of battling up front at any venue – he would have had a slight advantage on Saturday though.

So, with seven rounds remaining, seventeen points separates Blake Baggett (third in the standings) from Jeremy Martin (the series leader). Cooper Webb sits in the middle of those two, just eight points adrift. Honestly, if I were a betting man, I think I’d put all of my money on Baggett to win this title. Admittedly, he’s in the worst spot of the three at the moment, but that gap was much bigger not too long ago. Martin really needs to turn this ship around as soon as possible, before he loses all of the momentum. It’s funny how quickly things change in this spot; everyone seems to have forgotten that he was a dominant force just a couple of weeks ago.

Well, this is just incredible. I mean, we all know that the two Red Bull KTM riders are the class of the 450MX field, but their dominance in the second moto was unprecedented. In the opening moto, Eli Tomac ran the pace of the leaders for a majority of the race before he tightened up, which isn’t too surprising, it was his first race back, after all. However, he (and the rest of the field) had nothing for the top two. Just look at above times that are taken from the end of the race two, Kenny and Ryan were considerably faster – they ended the race a minute ahead of everyone else!

Roczen was also a little faster than his teammate, also, which proves just how strong he is. Many questioned whether Roczen has the fitness to battle up front on the tough days, but Roczen gave it everything he had in both motos on a rough, rutted track. The two Red Bull KTM riders have also established more of a gap in the series standings now, so this is certainly turning into a two-horse race. I think we will look back on Muddy Creek at the end of the year as the round where the two demonstrated just how superior they are.