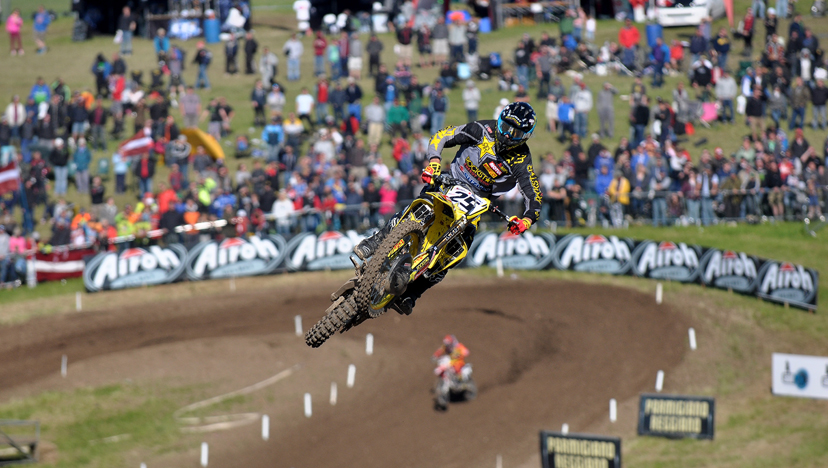 I was fortunate enough to watch the first MXGP encounter from the top of pit lane, which was really quite interesting, as you get an in-depth look at what is going on out on-track. I was looking forward to writing this column, because I saw so much stuff that usually goes under the radar. For instance, I noticed that Clement Desalle was visibly faster in this moto, despite the fact that the gap was not physically shrinking. Of course, a crash on lap eight halted his charge, but I think he would have given Antonio a good run, had he kept it upright.

Cairoli took the holeshot, which was obviously bad news for the competition – you never want to give him that much of an advantage. However, like on Saturday, Desalle seemed to have bucket loads of confidence, which is a trait that is pivotal. I am surprised that he was so much better, at times, as Matterley Basin is not the type of track that you would think that he would thrive on. But, just look at the times above, he was clearly on point!

On lap three, Cairoli had a clear track, whilst Clement was in traffic. However, despite this, the Belgian was almost two full seconds faster. Admittedly, on the next two laps he lost some time, but he was back to taking chunks out of Toni, after this. He then went down, so that was that, but he had already proven that he is capable of matching the man that most consider to be unbeatable.

So, where was he making up the time? Well, surprisingly, on a lot of laps (in both races) he was more than half a second faster in sector one alone! Just look at the table below, which highlights the sector one times; it’s very impressive, when you consider that sector one only covered a handful of corners. After watching Clement intently in the two motos, it was quite clear that the reason he was faster was that he was launching further down the step down that was after pit lane. It seemed that he was the only rider going that far, which was a bit bizarre, as it was faster, evidently.

Even after his crash, the Rockstar Energy Suzuki rider was back to setting faster lap times than the rest of the class, so he was certainly comfortable, which bodes well for the future. Like I wrote in ‘Hot and Cold’ yesterday, although Cairoli won, I think that Clement may have been the faster rider, which will give him a lot of confidence moving forward. We may have a race on our hands, folks!

Undoubtedly, one of the most impressive performances all weekend was Jeffrey Herlings’ ride in the qualifying heat on the Saturday. Usually, it is in the sloppy conditions (like we had on Saturday) that he is most vulnerable, but he thrived. Just look at those times! Dylan Ferrandis rode strong in second, but he was losing a lot of time each lap. We rarely see a rider be that much stronger. Maybe the guys that were chasing him felt there was no point forcing the issue in the tricky conditions, especially considering it was a Saturday.