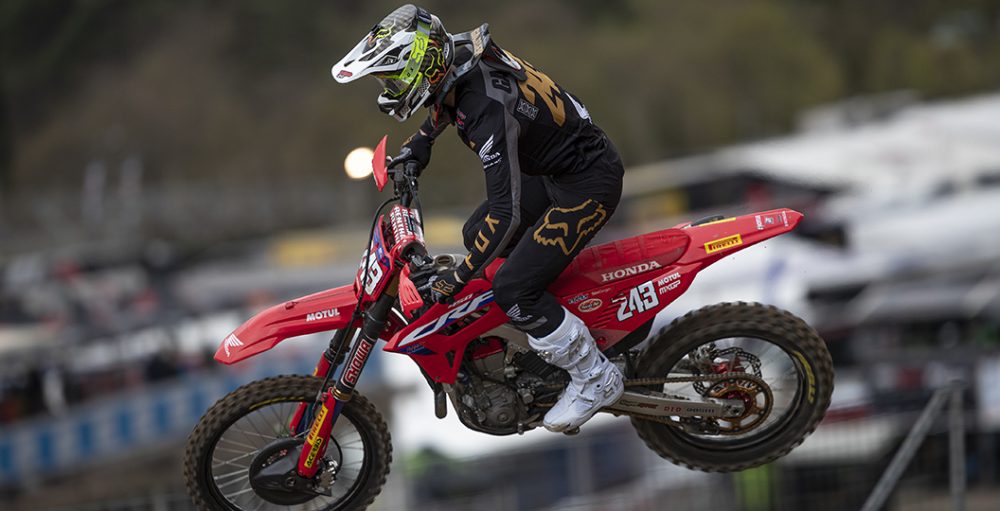 Everything is trending in the right direction for HRC’s Tim Gajser, who has won four of the first five rounds of the 2022 FIM Motocross World Championship and is sat on a 33-point advantage. The Grand Prix of Trentino is one of the landmarks on the series schedule for Gajser, as thousands of Slovenian fans pack into one turn to support their hero, but he handled that pressure well en route to his first clean sweep since the Grand Prix of Russia last year, which was 302 days ago.

It is no coincidence that Gajser is taking everything in his stride now – the lessons that were learnt in the insane title fight last year are serving him well. That’s discussed in-depth in this MX Vice interview from Pietramurata, as well as confidence and learning how to handle things in the correct manner. It is rare to hear Gajser assess his own performance in such a candid manner. This interview was first posted as an MX Vice post-race podcast that was presented by FLY Racing.

MX Vice: This is always a big weekend for you and I feel like there is a lot expectation on you when you come here, but you delivered! Your first 1-1 of the season, which is a box that I think you have been looking to tick, and everything is great right now. That sums it up.

Tim Gajser: Yeah, exactly. It was a great weekend. I felt like something was saying to me that it was going to be a good weekend when coming here, especially with having great support from the fans who travelled today. They were crazy and amazing! I had solid starts in both motos and worked my way up to the front when I was leading. Yeah, I made a comfortable lead in both races and then controlled the race until the end. I was really enjoying it out there. It was great. It is honestly not my favourite track. Okay, there is always a nice atmosphere. The track is really sketchy though, especially with the 450s, and there is a lot of hard, square-edged bumps. Yeah, I was really enjoying it here this weekend. We made a great job with the bike, team and everything. We did it correctly. It was a good day.

You were the fastest in both motos. Were you frustrated behind Glenn [Coldenhoff] in moto one? There was a point where [Jorge] Prado started doing some faster lap times and I am sure that the mechanics told you that. You were clearly faster than Glenn, but it took a while to get it done. Were you getting frustrated?

A little bit! I still knew that there was time, but when I saw that Prado was starting to get close to us then I said to myself that it was time to go. I pushed a little bit harder. I was waiting for a mistake a bit because I was constantly putting pressure on. I was there every lap. There was not even one second between us, but he did not crack and was riding really well. He covered all of the inside lines – it was not easy. I had to work a lot by going outside and using different lines, but I found a way around halfway into the race. I quickly put some heaters in and good lap times in; I made a little gap around four or five seconds. Something like that. I controlled the race, so it was good.

Did you think about doing the triple at any point this weekend?

Honestly, no. Already on the track walk, I said that it was possible. It was obviously possible. You did not gain anything though, because you went so high in the air. It looked spectacular. It looked nice when I saw the video of Jeremy jumping it. It was a huge jump. It was nice for the spectators – they were loving it!

Actually, from the video, it did not seem difficult. It was kind of wide open with a bit of a seat bounce at the end. There was not a place for a mistake. You had to really jump perfectly, because it [the landing] was the take-off of the second double and sharper. The take-off was not that long either. You had to jump into a one-metre landing and if you came short or over jumped it then it would not have been nice. I thought that there was way too much risk to do it and, in the end, you did not gain anything. It was similar. If you made a good scrub off the first one and the other one, maybe it was even faster? I did not even consider trying that [laughs].

You mentioned starts and those have definitely come around. The first moto in Portugal was not as good, but I feel like you are a consistent top-three starter now and regularly in the mix for holeshots. You seem to make quick passes, even if you do not get the holeshot. Are we finally putting starts behind us? Are we in a happy place?

Yeah. I mean, I am quite happy with the starts. We are still not getting holeshots, but I am happy to be there anyway. To be in the top three after the first or second corner is a good spot to be, so yeah. Let’s say that we can put the starts to the side now.

Even sat on the starting gate, are you more confident now? Are you sat there visualising the start and thinking, “I can do this!”

You obviously have to do that. If you do not see yourself first in the corner then you will never get the holeshot. It is kind of like a mental game – you have to believe otherwise it is never going to happen. I would say that I go to the gate way more confident than last year when I was really struggling with the starts. I know that it was difficult to get a holeshot… I am talking about last year. We have definitely had some good starts this year and even got a holeshot in Argentina, which gave me some motivation. It is kind of like a sign that we are on the right path and going in the right way. We really did a lot of starts in the off-season [laughs].

“It is kind of like a mental game – you have to believe otherwise it is never going to happen. I would say that I go to the gate way more confident than last year when I was really struggling with the starts.”

Everything is great and going in the good direction, so are you testing a lot at the moment? A new frame for you guys this year, but you had an off-season on it. Are you looking to make some improvements or  just happily working with what have you got?

Just little things at the moment, because I really feel comfortable with the bike. Going from race to race, the tracks are different. There are a few changes but nothing too crazy. I am feeling quite comfortable and I do not feel that we need to test anything – I am happy with the bike.

I know the answer to this question, but do you think that you have more in the tank? If you had been pushed that little bit more today, or at any of the rounds, do you feel you have got more to give? Yes, right?

Honestly, yes. Not to disrespect the others, the class is super stacked. Everybody is super fast and pushing. We are there. You can also see it with the lap times – the top ten guys are in like one second. The pace is there and there is really good competition. I am super happy. I would say that from the experience that I have in the past… I learnt a lot from last year especially and the end of the year when the pressure was over the roof. The pressure was really, really high when me, Romain [Febvre] and Jeffrey [Herlings] were fighting for the title. I would say that I learnt a lot by losing that championship. I have experience with how to act and prepare myself under pressure. Even today, I felt a lot of pressure. Everybody was expecting me to win! I would say that I always try to analyse the things that happened in the past and take them as a positive, but also learn from them.

Two more quick things: We never actually spoke after last year. Entering the off-season, was it mentally tough for you to put the previous championship behind you? You were so close. Was there a month or two weeks in the off-season where you struggled to get it off of your brain and thought about it still? Was it hard to put it behind you?

I would say that it was kind of like a relief when the season was done. Okay, I was disappointed with not winning it. I was happy that it was finally over. Losing like that always gives me a lot of motivation. I tried to forget 2021 as soon as possible. I had a little break and then when I started again, with the training and preparation, I said to myself, “This is a new year. Everyone starts from zero, so focus on having a good off-season and winter.” We had a new bike as well. Not completely new, but there was a lot of new stuff to test. I immediately felt really good with the new bike, so then it was just on me to put the hours in on it and train good in the gym. I had to be ready, physically and mentally. I am really happy with how this year has started. Hopefully we can continue this strong and keep going like that.

Would you say that you are more confident now than ever before? What you learnt last year adds to your confidence, because you know that you can deal with any situation. Four wins out of five so far and, if you had passed [Brian] Bogers in the first moto in Portugal, it could even be five out of five. Do you feel more sure of yourself than ever before?

Yes. I would say yes. I feel way more relaxed going to the races. You know, I think that is the confidence. When you have a good off-season then it is always kind of like… You know that you did all of the hard work that you had to do. It is just up to you to perform after that and show what you are capable of. Like I said, if I came back to last year then I think that this kind of pressure… I react completely different when I am under pressure now, because I know what is not good and what can help me. It is good to have this experience. I would say that last year made myself an even better rider and maybe more mature. Maybe I ride with my head more and think a bit more? I also learnt about myself, mental confidence and stuff like that. I am happy. Of course, I was not happy to lose the championship last year. I am happy though. Sometimes you have to lose to gain something. I am happy.