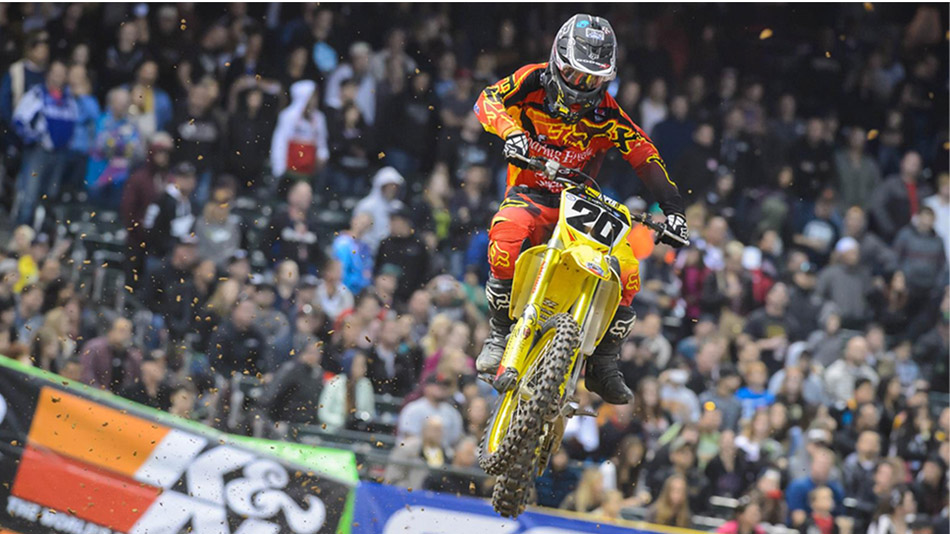 TICKLE MOVES UP AT PHOENIX SX

RCH Racing Soaring Eagle Suzuki’s Broc Tickle scored his second consecutive top-10 finish of the Monster Energy AMA/ FIM World Supercross series with eighth overall in the second round at Chase Field in Phoenix, Arizona on Saturday night; moving up to seventh position in the series.

Tickle had a strong night from the start: After dialing-in the track and finishing sixth in timed-qualifying aboard the team’s RM-Z450, he went on to nab one of the top-four spots in his heat, giving him a direct transfer to the Main Event where he overcame a slow start in 13th but moved into the top-10 ahead Chad Reed and Will Hahn.

Said Tickle: “Today was great. Practice went really well and I felt aggressive and solid. I qualified to the Main directly out of my heat race which was also good. The Main Event was great apart from my first couple of laps. I’m looking forward to working on my starts this week because that’s the main thing keeping me from a better result.”

Tickle’s RCH Racing Soaring Eagle team-mate Josh Hill did not have the night he was hoping for on the track: Things looked promising for Hill in the LCQ as he moved-up to fifth and was head-to-head with Chris Blose on the final lap, battling-it-out for the final qualifying spot. But unfortunately, Blose edged-out Hill for the fourth-place finish, knocking Hill out of the Main Event.

Said Hill: “I’m obviously disappointed and embarrassed at the outcome of tonight’s race.” But he and the team will work diligently to get him back to 100% to where he needs to be on the track and he looks forward to racing this weekend at Anaheim 2 in California.

The Monster Energy Supercross Series heads back to the Angel Stadium in Anaheim, for round 3 on January 18th.