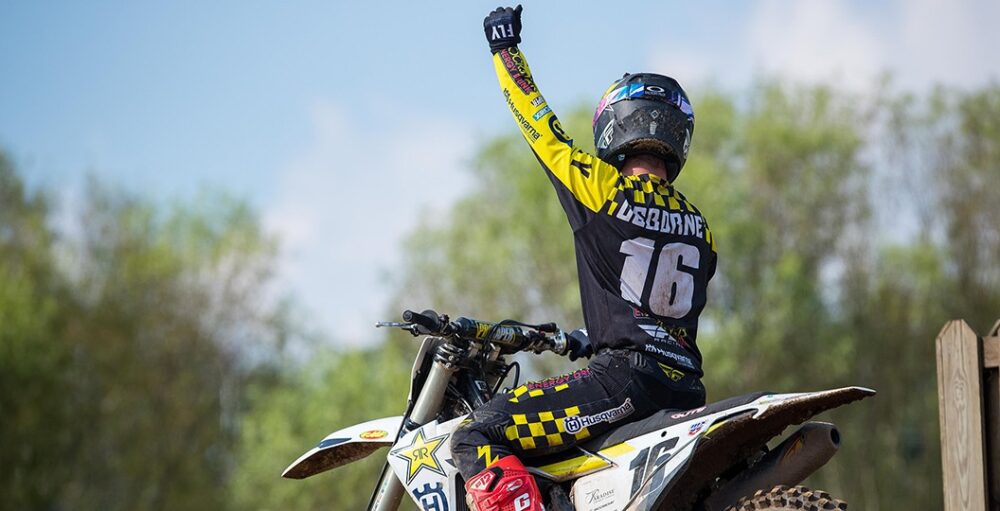 Presented by FLY Racing: FLY Racing has redefined expectations in safety and performance with the Formula helmet. Tested on the most advanced equipment in the world, the Formula helmet’s overall performance is best in class in both high velocity crashes as well as rotational and low speed impacts. Featuring RHEON technology, Conehead EPS, and a 12K carbon shell, the Formula’s Advanced Impact System (AIS) introduced a new approach to both protection and weight reduction. Weighing only 1290 grams, we believe the Formula to be the perfect combination of industry leading innovation and ultra-lightweight design. Simply put, the Formula helmet changed the game.

One round down! The 2020 Lucas Oil Pro Motocross championship finally kicked off last weekend in Hurricane Mills, Tennessee. Nearly three months later than a typical start, the suspense has been palpable for stateside race fans. Even though schedule changes are still ongoing, the first round is done and dusted. What did we learn?

– Zach Osborne is still on fire after winning the final round of Monster Energy Supercross. His 2-1 scores set the tone for his continued improvement on his Rockstar Husky 450. The question now will be if he can sustain that level or if we see a shake-up as riders find their groove.

– Dylan Ferrandis is the clear favorite for this 250MX title. He dominated the day and really didn’t seem to be under too much pressure at any point. His relaxed demeanor spoke volumes about where he sees himself amongst his 250 peers.

– Jason Anderson is a threat! Team Fried ran off to a fairly easy first moto win on a track that most would consider a big challenge for the New Mexico-born Anderson. It was the surprise of the day for many.

– Cooper Webb is out for the series after a lingering back injury suffered in February. Losing Webb is a tough blow for the series. [Ed. Note: More on the Webb news elsewhere on MX Vice.]

– The Monster Star Yamaha 250s are still the bike to beat. Their next-level starting prowess is such a powerful tool to wield every gate drop. Imagine how much easier your job would be if you started ahead of your competition every single time?

– The 450MX class is stacked! With newcomers like [Chase] Sexton and [Adam] Cianciarulo immediately jumping into the mix of the established pecking order, this series is going to be a wild one. There are more moto-winning-capable riders in 2020 than any year in recent memory.

– Suzuki isn’t dead! With Joey Savatgy and Freddie Noren leading the pack around the first corner in the first 450 moto, most people found themselves saying the same thing I was: “Wow, Suzuki!” For a brand that has been down for a bit, that had to feel good.

– Eli Tomac looked a tad rusty but is warming up nicely. His first moto was a head scratcher but he looked much more comfortable in that second go. Expect wins soon.

– J-Mart is back and ready to battle for this 250MX title. Unfortunately, he is up against a very prepared Dylan Ferrandis. If anyone can wrestle this title away from the #14, it will be the #6.

– RJ Hampshire defied medical normalcy with his lightning fast return to racing. After an ACL surgery in late March/early April, many considered RJ’s return to racing in August a questionable one. He shut that down in a big way with his second overall at the opener. Modern medicine!

– Hunter Lawrence had a day he would like to forget. 40-14 really puts him under pressure series-wise but Saturday is a new opportunity to change the narrative.

– Justin Barcia can still battle up front, shouting down the naysayers with a first moto podium ride. His crash in the second moto derailed a better overall finish but it was still a very positive day for he and his team.

– Much like MXGP, the schedule is a hot topic. With state guidelines being the biggest variable, watch for several different talking points in the coming weeks. Hopefully, the current schedule is the final one but this will be a fluid situation all the way to October.

– Dylan Ferrandis looks to be staying blue for 2021 but many are pointing to an open seat on a GASGAS next season. Who lands there and what hauler they ride out of are still up for grabs.

– Justin Barcia is job hunting and is rumoured to be close to both Penrite Honda and SmarTop MotoConcepts Honda offers. Watch for his long-time relationship with Alpinestars to be a factor.

– Chase Sexton is bringing a new tone to HRC Honda and looks to be a real challenger to Ken Roczen’s alpha role moving forward. That will be an interesting dynamic to watch as Kenny has been “the guy” since 2017.

– JGR Suzuki sounds like they have more support for 2021 and will likely stay yellow. A great satellite effort, we need JGR in the sport to add jobs, rides and professionalism.

– AC9 has locked up another two years at Monster Energy Kawasaki in what seemed like a no-brainer move for everyone involved.

– Approximately 17 riders are rumoured to be at Monster Star Yamaha next year (sarcasm but some truth here).

Saturday brings round two of the series to the exact same location in Tennessee but I fully expect a different result for many. The opening round is usually a strange affair with nerves, rust and a feeling-out process. The second round is more of a business-as-usual display of what we should expect for the rest of the series. Nerves have calmed and many the bike a bit more figured out. The real variable this weekend will be the weather. Afternoon rain is a common occurrence at Loretta Lynn’s Dude Ranch in August. If it does rain during the day on Saturday, expect a full mud race. This dirt does not handle rain well and is in a low spot compared to the hills around it, adding to the trouble. Let’s hope for a similar Saturday to last weekend but I have a feeling we will see an interesting afternoon.