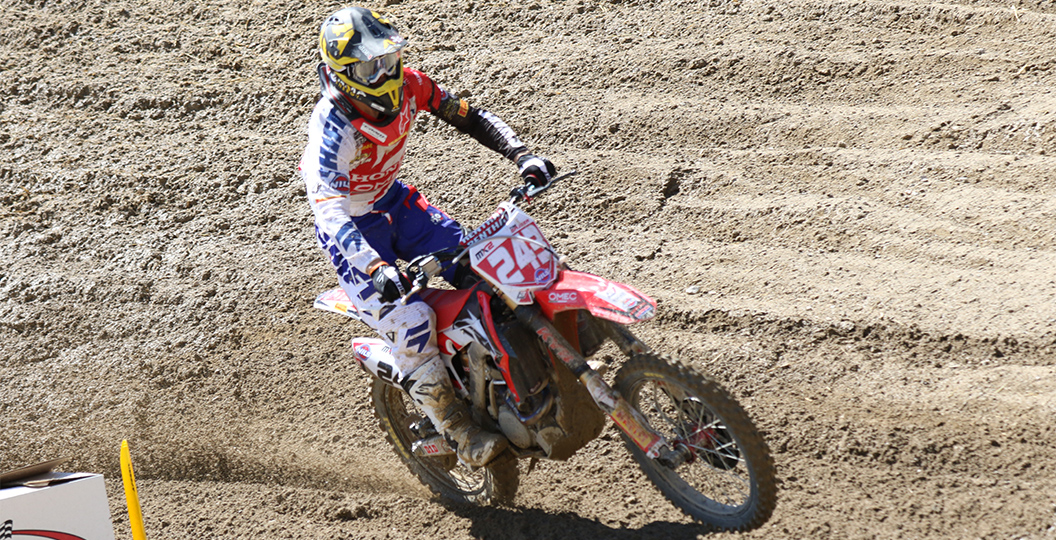 Third in qualifying for Gajser

Tim Gajser got his MXGP of the USA, the final round of the MX2 championship, off to a great start today with a solid third in qualifying.

As the desert sun sent the temperatures above 30 degrees Celsius, the competition in the early stages of the race was even hotter. Tim Gajser went wheel-to-wheel with championship rival Pauls Jonass, with each rider taking their turn at the front of that particular battle.

From the start, Gajser found himself in eighth, but soon fought his way through to second and was closing on the leader. It was only when he reduced his pace in the last laps that he made a couple of small mistakes and crossed the line in third.

The nature of the fast and steeply banked first turn means that gate pick for tomorrow’stwo races is not so important, but nevertheless the result starts what could well be a significant Grand Prix weekend for Tim Gajser, the Honda Gariboldi team, and Honda strongly.

Giacomo Gariboldi: “Tim did everything exactly as he needed to do today – he had a good free practice, a good timed practice just to learn a bit the track, and then he rode a very good race. He was closing a little in second on the leader, but then used his head and didn’t push too much. Ok, he had a little crash on the last lap, but third puts him very well for tomorrowand it’s very good for his mind.”

Tim Gajser: “The race today was pretty good. I’m feeling really good on the track, and it’s really high speed so I like it a lot. The start was not the best as I got closed on the inside, but then I had a pretty good first lap and passed many riders. I nearly caught the leader, but then I saw that Valentin was already far behind me so it wasn’t necessary to push too much, but then I rode maybe too relaxed as I made a mistake on the last lap and had a stupid crash.

“Jonass and I had a battle at the start of the race today, and it was very clean and that’s really good. We are fighting for the championship, and it’s still open, but it was very fair between us and that’s what makes this sport so great. I’m feeling really confident fortomorrow and looking forward to riding and having fun again.”