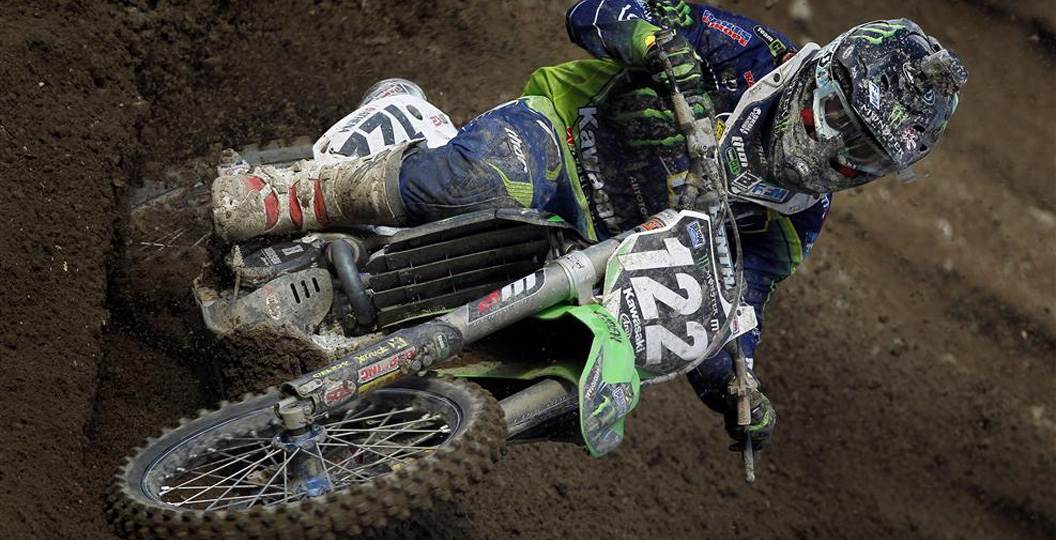 A third for Dylan Ferrandis in Sweden

After two weeks of extensive testing with the team the French teenager started the weekend in fine style as he set the fastest lap in timed training and raced to a confident third in qualification, but his opening GP moto was ruined when the rider next to him tried to anticipate the fall of the gate and in the tense heat of the moment Dylan also rode into the gate. Joining the race in last position he surged through to twenty-first position in a single lap but then crashed into the stricken bike of a fallen rival and had to do it all again, eventually finishing a brave twelfth. With no starting difficulties in race two he quickly moved into fifth position and after just four laps had secured the third position, which he held to the end of the race. The combined results of the two motos netted Dylan sixth overall in the GP and enabled him to maintain fifth place in the series standings.

Young American Thomas Covington had another baptism of fire on a track surface littered with stones, which he had never previously encountered in his career. He has also been unable to follow his usual training programme for three weeks as the result of a foot injury sustained at the Italian GP. The US teenager was also involved in a number of collisions with other riders during the day but he bravely persevered to finish twentieth in each moto. He is now seventeenth in the series standings.

Tommy Searle, the CLS rider in the FIM MXGP Motocross World Championship, finished fifth overall in Sweden after taking sixth and fifth placed moto finishes. The Englishman is still working to improve his starts and twice had to battle his way up the leaderboard from ninth and sixth positions at the end of the opening lap of each moto. Despite missing five GPs through injury earlier in the season he has now advanced to thirteenth in the championship standings.

Dylan Ferrandis: “ Saturday was good for me with the pole position in timed training and a third place in the qualifying race; we have worked on the settings of the bike since Germany and I have a better feeling now. Unfortunately the first race wasn’t so good; the rider next to me hit the gate and that disturbed me, so I also hit the gate and started in last position. Then in the second lap another rider crashed on a jump and I hit his bike, so after two laps I was only twenty-third. I came back to twelfth, which was not so bad on this track, and in the second race I got a third position even if my start was not very good. A disappointing weekend.”

Thomas Covington: “I never raced on a track with so many rocks; that makes it pretty difficult for me. The track is challenging with the rocks and a strange grip, and it was definitively a tough weekend for me with some crashes with other riders. I haven’t been able to train due to my foot injury from the race in Maggiora last month, but I wanted to race and get more experience. For sure I need more time to recover; I think I will be fit for Loket at the end of the month.”

Tommy Searle: “I didn’t like the track so much today, I don’t think it’s a very good track and for a GP it should be a lot better prepared; it was dangerous in some places, and you had to ride very carefully. I was sixth and fifth; my second start was better and that made it a little bit easier for me. I felt more comfortable in that race. Now I’m looking forward to Finland next week as I like the track there.”