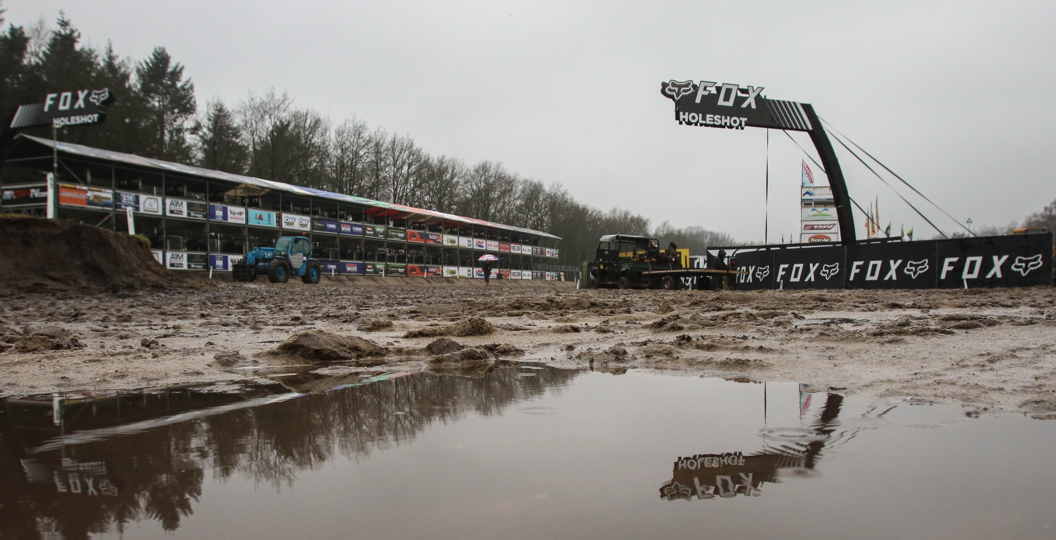 The Starter: MXGP of Europe

The Grand Prix paddock is alive at Valkenswaard, as everything is now in place for round two of the current campaign. The living area does not necessarily give that impression, however, because a majority of riders and team personnel are inside to shield themselves from the freezing temperatures. One should expect that to be mentioned countless times this weekend.

It is not actually too bad today, with highs of eight degrees. Temperatures are going to drop significantly later on, however, and then minus one will be the warmest that it is going to get tomorrow. It is certainly rare for a race to be held in such extreme temperatures and could be considered a cruel reminder of why the series now begins in extravagant locations like Argentina and Indonesia. The only positive here is that no rain is expected across the two days of action. It really could be much worse.

Although there will not be any rain to alter track conditions, there is a legitimate fear that the track will be left frozen and not thaw at all during the day. It will be minus six in the early hours of tomorrow morning and there is not much that the track crew can do to combat that. A lot of personalities within the paddock have different views on what could be done to minimise the damage, such as ripping once an hour so that it does not even have an opportunity to freeze, but the track crew were not available to comment on what procedures have been implemented.

It is worth noting that it has rained considerably in the days prior to the event and even earlier today, which has left the track in a bit of a mess. It can obviously take a considerable amount of precipitation, seeing as it is sand, but the start straight does feature a large puddle and then the area behind the start is just a quagmire. The freezing temperatures should sort that out and then provide some very different issues when the riders hit the circuit for the first time tomorrow. The joys of holding a race in Europe at this point in the season!

The race that was held at Valkenswaard in March five years ago has been referenced countless times, as that was the only other time that most can recall it being as cold as it is now. One rider mentioned that the turn that led back onto the start straight was so hard that there was not a single berm and it was like supermoto. Most expect something similar this weekend and the circuit to not be as diverse, offer as many lines or separate the riders nearly as much as it typically does. Could that impact the way in which the impending battle between Jeffrey Herlings and Antonio Cairoli plays out?

The on-track fight between those two is not going to dominate headlines this weekend, which must lead Japanese manufacturers to breathe a sigh of relief. Tim Gajser, a former world champion who has never won at Valkenswaard, is set to make his return from injury. What was the health issue that caused him to spend a brief period on the sidelines? A fractured jaw was sustained a month ago on Sunday, funnily enough, so the recovery clearly went well. The fact that he is able to ride at all is impressive, let alone the fact that he is poised to tackle a gruelling sand track.

“I am so happy to be finally making my season debut,” Tim Gajser said in a team statement. “I feel ready to go. I have ridden three times already and I am getting more and more comfortable on the bike. Now I am just looking forward to getting to Valkenswaard and racing again. It will obviously be harder than normal not only because I am back from injury but also because the other guys already have one round under their belts. But nevertheless I am in good shape, have been training a lot and I got back the few kilograms I lost due to the inability to eat properly in the early part of the recovery. I cannot wait to be back with the team again – it was not fun to watch the races from home.”

A final note about the track. Nothing has changed as far as the layout or obstacles go, which is not much of a surprise at all. Valkenswaard was drastically altered just a couple of years ago and these things tend to happen in cycles. There has been a change to the infrastructure though, as every other metal starting grid has been painted bright green. It adds a little something extra to the series and obviously represents the colours that Monster Energy use too. How long will it be until some logos are slapped on there? It makes sense and would actually be one of the best advertising spots on the track.