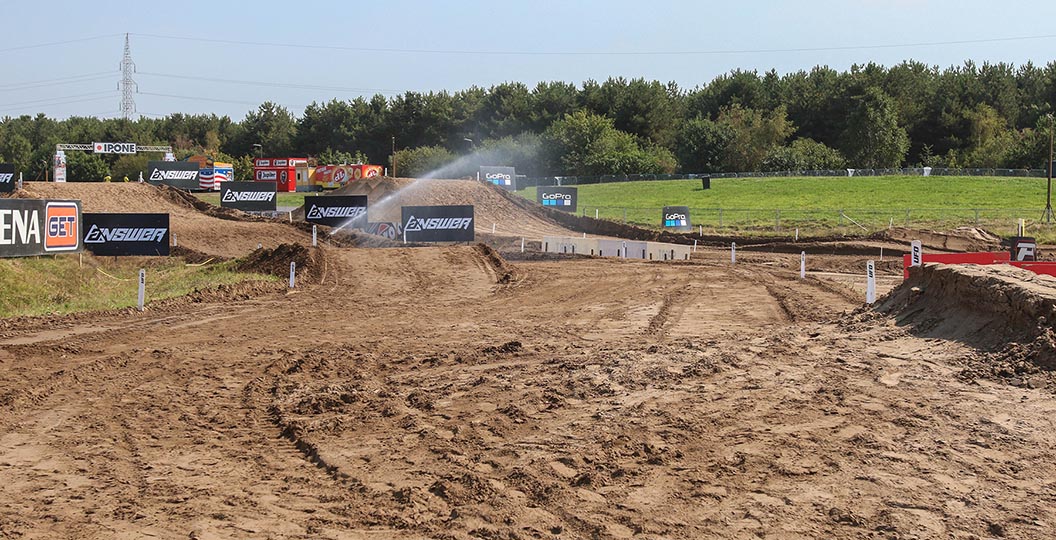 The Starter: MXGP of Belgium

The fifteenth round of the FIM Motocross World Championship, the Grand Prix of Belgium, is one that most have had their eyes on for a while. Although those contesting the series have encountered hard-pack rounds recently, most have spent their time pounding laps in the sand in an effort to prepare for what is considered the toughest event of the season.

There is a common problem that the Grand Prix contingent face when preparing for a sandy event like this though. Everyone flocks to the tracks that surround Belgium and The Netherlands, obviously, which creates a crowded environment. Training with other elite riders is not a problem at all and actually welcomed, seeming as it helps to create track conditions that resemble what they will face at the weekend, but there are amateurs who ride at the same time. The situation is similar to what those in America have encountered at tracks like Glen Helen. Jason Anderson and Dean Wilson found out just how high the risk is in May.

Honda Park on Tuesday was a perfect example of this. Ben Watson, Romain Febvre, Jago Geerts, Shaun Simpson, Jeremy Seewer, Gautier Paulin, Jordi Tixier, Anthony Rodriguez and a few others were on track. Additionally, there were schoolboys and lesser riders attempting to stay on two wheels and not be much of a nuisance. There are no groups at these practice tracks and, seeing as they are only open for five hours of day, it was just a free for all. It was difficult for all of those Grand Prix stars to put in consistent motos. All of the tracks are close to each other, so everyone then lives in the same area and travels to the same places. It is often overlooked that Lommel and Valkenswaard are just fifteen minutes apart!

Seeing as the tracks around Lommel were so busy this week, some riders opted to drive a couple of hours out to Axel in The Netherlands. Axel, a track that was once a part of the Dutch Masters, played host to Max Anstie, Bas Vaessen, Jordi Tixier, Harri Kullas, Ken De Dycker and others on Wednesday. It was actually an impressive facility and prepped to perfection, but most feel that it is just a bit too far when there are just as good tracks closer to home. There is no shortage of sand in this part of the world! Anyway, a lot of the elite riders rode twice this week and then took Thursday and Friday off to prepare for what promises to be a taxing weekend.

Conditions are going to be brutal this weekend. Lommel would put riders to the test no matter the weather anyway, then add the fact that temperatures will hit thirty-five degrees over the weekend in and it becomes clear that some will struggle to maintain a high pace across a moto. The same protagonists will fight at the head of the field in each class and, unsurprisingly, Jeffrey Herlings and Jorge Prado enter as the heavy favourites. There will be some surprises though, as there is always a sense that anything can happen when the FIM Motocross World Championship arrives at a venue such as this. There are certainly a lot of riders who believe that they are capable of climbing up onto the podium!

A bit of news to bear in mind this weekend is that Marshal Weltin, who previously piloted a Vamo Honda, has jumped across to the F&H Racing awning. It is hardly surprising that Weltin searched for a new home, as he has experienced countless bike problems this season and those have robbed him of some respectable results. The fact that he currently occupies twenty-sixth in the standings is not a true representation of how well he has performed. Lommel could be rough, just because he did not grow up in these conditions, but hopefully the deal with F&H gets extended so that he can really fulfil his potential before being bumped out of the class.