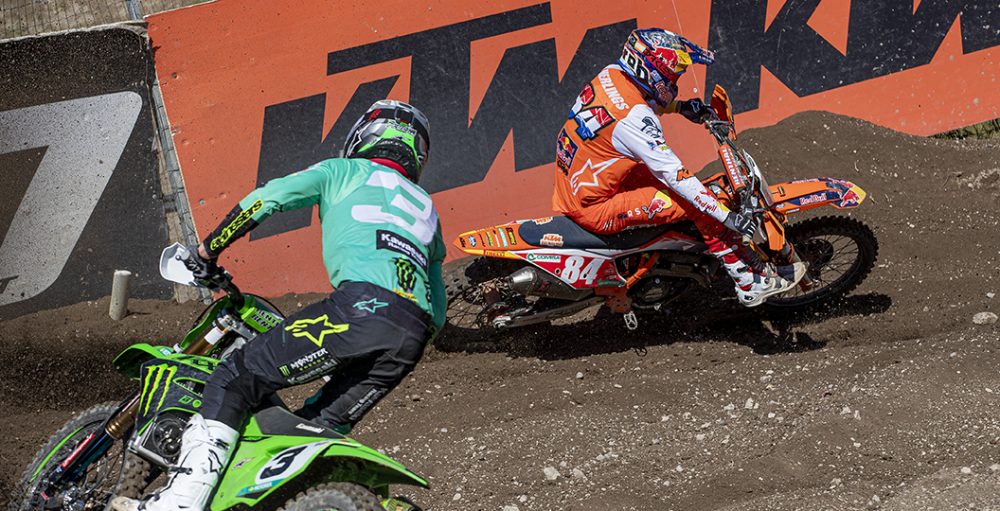 The key moment that occurred at the recent Grand Prix of Trentino, the fourteenth round of the 2021 FIM Motocross World Championship, was obvious. If Jeffrey Herlings ends up claiming the premier-class crown in two weeks, then scholars will reflect on the second moto as the one where he truly crushed the soul of his competitors. Herlings should not have won that moto.

The MXGP class has been so competitive this term that no one has dominated. Herlings has taken a majority of the victories in the last two months, of course, but has not decimated the competition en route to those. It has been a fight each time and the same could be said about the second stint at the Grand Prix of Trentino – there were four riders within three seconds as the two-lap board beckoned. It should not have ended like that though.

It should have been one of the more mundane motos of the season, as Romain Febvre rocketed out to the early lead with both Herlings and Tim Gajser stuck in the lower half of the top ten. Febvre has not had such a golden opportunity since the Grand Prix of Flanders-Belgium in early August, which is the only event that he has claimed this year. Add in the fact that he has been extremely competitive in recent weeks, more so than Gajser has been, and it was a foregone conclusion that he was going to triumph. It was perfect.

Herlings unearthed that raw speed that lurks within, however, and begun making some incredible progress on the slick surface. Lapping seconds faster than his competition on some laps, he passed Gajser and made a move on Febvre just two laps later. Herlings should have had his series lead cut to a single digit yet instead he doubled it – he is 24 points clear with eight motos left to run. The gain that he made in the points pales in comparison to the impact that he has had away from the track though.

Febvre and Gajser strolled into Pietramurata thinking that they could make a difference on that track, as it plays to strengths that both guys possess. Not only did a golden opportunity slip through their fingers, both riders had to watch Herlings slip past and accept that they had nothing for him. To make matters worse, if that is even possible, they have to complete four more motos on the same track, haunted by what unfolded on Sunday. Recovering from such a crushing blow is going to be extremely difficult.

This is the FIM Motocross World Championship though and momentum does swing from one squad to the next rather quickly. What unfolded in nations like The Netherlands and Germany acted as a cruel reminder to expect the unexpected. Herlings has won eight of the last 14 motos, on the other hand, and transformed a 43-point deficit into an advantage of 24 points. Perhaps this is the beginning of the end?