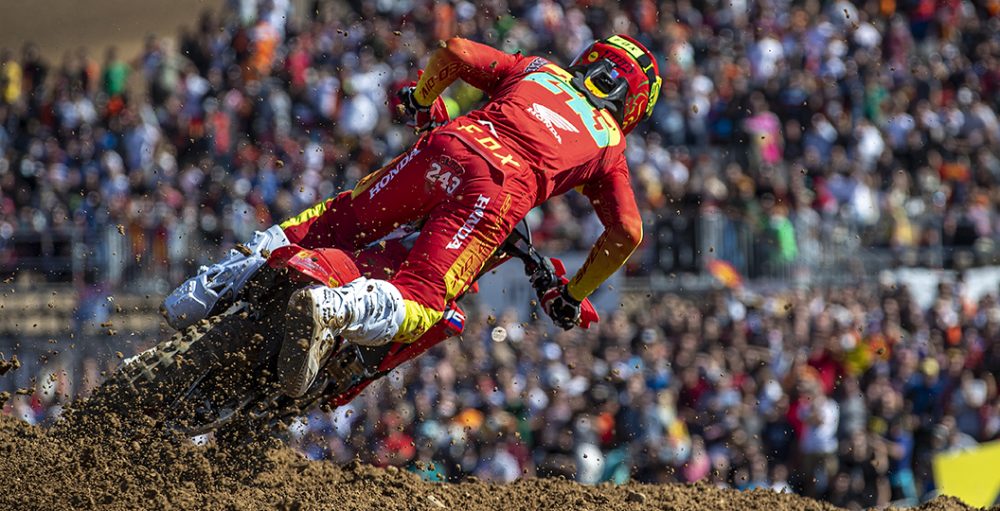 The key moment that occurred at the Grand Prix of Spain, round thirteen of the 2021 FIM Motocross World Championship, may turn out to be a poignant moment in the premier-class fight. Jeffrey Herlings struggled in the early stages of the first moto and appeared vulnerable, which allowed Romain Febvre and Tim Gajser to pounce. Febvre did so, securing the maximum haul of points.

Febvre actually got to within a single point of the red plate at that point. It was a perfect example of thriving in a high-pressure situation – something that was an absolute necessity as the number of races that remain dwindles. Gajser was also in a position to make a small gain on Herlings, as he was comfortably in third and set to inch two points closer to the top of the table. Gajser had an untimely fall just a lap from the end that caused him to drop to fourth – a four-point swing was the conclusion.

Now, it would be easy for one to argue that four points is a very minor figure that is not going to be a factor at the end of the season. It would not have been last year or even the year before that. It is quite clear that this title battle is going to come down to the very last moto though, so every point does indeed count. It is a new situation for the three riders in contention and fans. It is rare for a championship to be as thrilling as this! 2008 was the last time that a premier-class fight included so many protagonists.

Herlings was locked into a fierce duel with Tommy Searle for the MX2 title, but still took the crown with a round to go and has done so ever since. Counting points until the final chequered flag falls is not something that he has ever had to do before nor has Romain Febvre, who won his maiden title with two rounds to go. Tim Gajser clinched his maiden title, in that same season, in the final moto, but has won with races to spare ever since. Such a unique situation is bringing out different qualities in each rider.

The rider who ultimately triumphs will be the one who remains calm in such an intense situation and limits mistakes. Herlings proved that he has that quality – he slowly worked his way from ninth to third to salvage something from moto one. Febvre did exactly the same after a crash on the first lap of the second moto. It was an impressive showing from the KX450-SR pilot, despite the fact that the gap between him and the red plate doubled on Spanish soil. It was encouraging to see him thrive in a high-pressure situation.

Gajser faltered in moto one, which takes us back to the key moment from the Spanish Grand Prix. Unforced errors from the reigning world champion are not uncommon, of course, but he has done a rather good job of eliminating those this year. Consistency has arguably been his greatest strength. Well, it was before he broke his collarbone! This would be an awful time for untimely mistakes to return and those must not be present when the Grand Prix contingent arrive at Pietramurata. This is a game of inches.