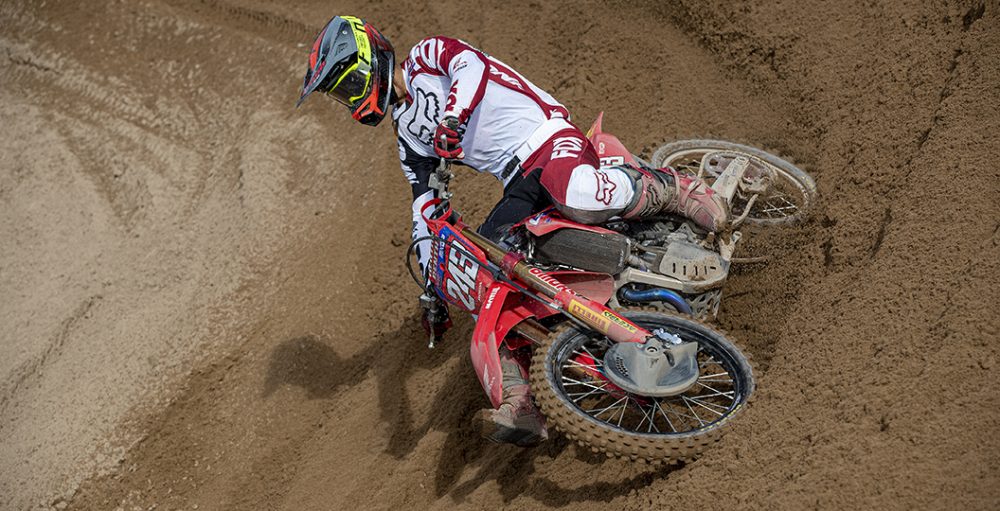 The Moment: MXGP of Sardegna

Another twist in the fascinating story that is the 2021 FIM Motocross World Championship. A training crash on Friday, September 10, left him with a broken collarbone, an injury that was surgically repaired the next day. There was then a week for Gajser to recuperate and prepare for what would be his toughest challenge in quite some time, both mentally and physically.

Riding shortly after a broken collarbone is not uncommon, of course, as many leading riders have faced the same situation and made the best out of a tricky situation. It never takes too long for a guy to bounce back from the ailment but racing straight after is a daunting prospect. Jeffrey Herlings skipped the Grand Prix of Lombardia in 2018 and then returned to the top of the podium two weeks later. Gajser was not in a position to skip a round, so he tackled the pain at the Grand Prix of Sardegna in an effort to salvage something.

It was a worthwhile exercise. The red plate did fall from his CRF450RW for the first time in more than eleven months, but he is just one point down on Herlings and still in the thick of the title battle. Had he elected to sit on the couch and bide his time, he would face a 16-point deficit at this point and things would look a bit bleaker. Gajser can take advantage of a weekend off now, thankfully, and focus on returning to his best for the Grand Prix of Germany on October 03. It is realistic that he will be back on track at that point.

“Coming into this race, I knew it would be extremely tough but I know how important that every single point can be in this championship battle. I wanted to try,” Gajser said in a post-race statement from Team HRC. “I actually felt pretty good despite the injury, posting a fast lap time in free practice, but I was not able to do a good one in time practice and this really hurt my chances of a top-10 start. Overall, I am happy to have scored 15 crucial points and, with a weekend off to get healthy, I hope that by Teutschenthal I will be able to be back battling for wins once again.”

This is a bizarre take, admittedly, but this collarbone issue could end up being a positive for Gajser. Had he not encountered a single problem this year and clinched the title, the naysayers would have pointed to the fact that Herlings had to deal with a broken shoulder blade. This is fair game now though. Herlings managed to overcome his issues, yes, but so too has Gajser. A worthy champion is going to be crowned, with no need for any asterisks or discussion about how deserved the honour is.

This is actually the situation that Romain Febvre has found himself in. Febvre is four points behind Herlings (three down on Gajser) and a factor in this fight. However, he has faced no real adversity and fallen out of the top ten in just one of the 20 motos. Consistency has placed him in a favourable position. Staying healthy and avoiding incidents like first-turn crashes is a skill in itself, of course, but it is uncommon for fans to take note of that.

It is going to be an exciting end to the 2021 FIM Motocross World Championship, especially seeing as Jorge Prado is just 11 points down too. It is almost like the points have been reset, similar to what they do in the ‘Chase for the Championship’ in NASCAR. May the best man win – there is no doubt that athlete is going to have to earn it.