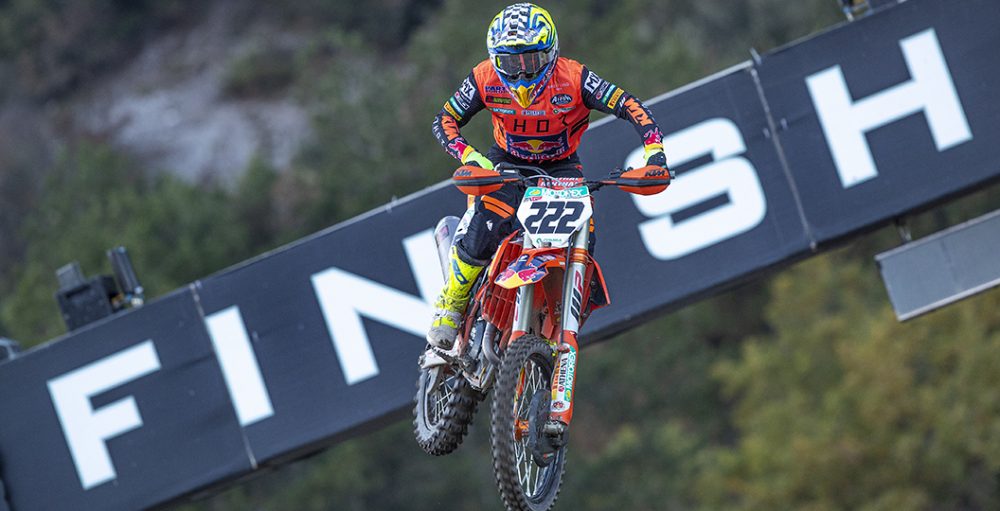 The Moment: MXGP of Pietramurata

Antonio Cairoli has encountered countless highs and lows in the 2021 FIM Motocross World Championship, his final term at the highest level. There have been incredible moments, like the Grand Prix of Great Britain where he was impeccable and raced to a straight-up win. It turns out that was not the final win of his career though, as he added another to his tally at the Grand Prix of Pietramurata. It was a touching moment.

Cairoli was nestled in the midst of the title fight for more than half of the season before a horrific fall at the Grand Prix of Sardinia caused his charge to grind to a halt. The crash left him with damaged ribs too, so he could not compete for podium position at the three Grands Prix that followed. It seemed that he was going to limp to the finish in his last season, which was a shame considering how well it started. Cairoli has healed up just in time to go out with a bang though, it would seem, as he beat his fiercest rivals to win at home on Wednesday.

Winning Grands Prix was his sole focus entering the stretch of Italian events, as taking fourth or fifth in the championship standings means nothing to him. Why would it? This is a rider who has won nine world titles, finished second three times and third twice. “This is what I really want at the moment, because I do not really care about the championship,” Cairoli told us. “If I am fourth, fifth or sixth does not matter. You ride a lot more conservative when you are in the fight for the top three, as you want points every time.”

The triumph at the Grand Prix of Pietramurata was the ninety-fourth of his life – seventy of those came in the premier division. It was also the one hundred and eighty-second race win of his career. If those statistics are not impressive enough, it was the one hundred and seventy-eighth time that he has been on the overall podium. Incredible! The amount that Cairoli has achieved throughout his career should not be understated as he inches closer to retirement.

There is a chance that he is going to add to those figures in the future, of course, as he is still adamant that he is going to compete at select events next year. “I really think that I will do some races next year,” Cairoli reaffirmed to MX Vice at Pietramurata. “I enjoy the riding and the racing a lot. It is difficult for me to do a full championship at this age. It does not really feel bad – I am not going to compete for the championship anymore. I know that I can be competitive and come to do some races next year.”

There is still an opportunity for Cairoli to claim a ninety-fifth Grand Prix win before the 2021 FIM Motocross World Championship concludes, of course, as three races remain and all of those will be run in Italy. Having him back to full fitness, or close anyway, will make the title fight so much more interesting too, because he is the ultimate spoiler. Game on.