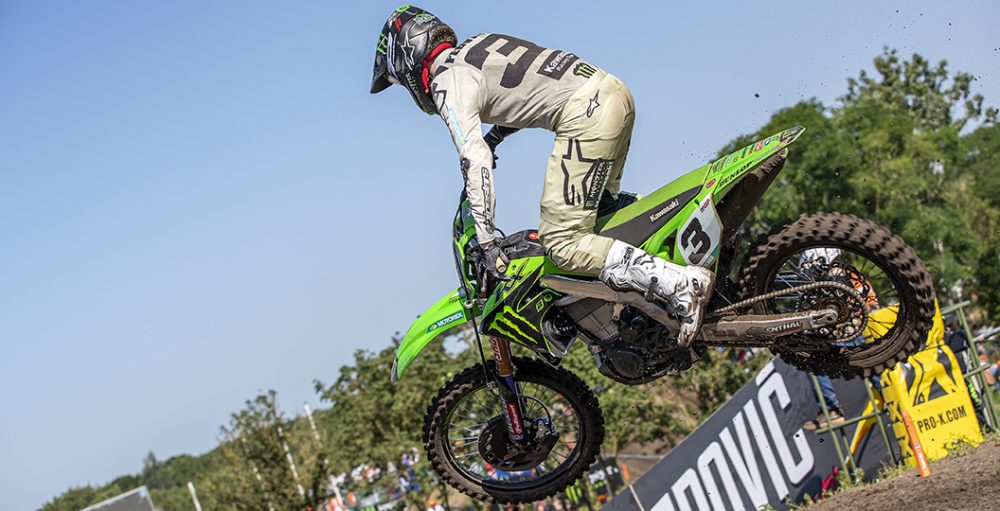 The Moment: MXGP of NL (Oss)

The key moment that took place at round four of the 2021 FIM Motocross World Championship, the Grand Prix of The Netherlands at the new circuit of Oss, occurred in the paddock. Rumours begun to circulate that the Monster Energy Kawasaki Racing Team could be changing hands ahead of the new campaign, which is just a matter of months away. The chatter culminated in an official announcement being released today.

Thierry Chizat-Suzzoni has run the Kawasaki team, like how Claudio de Carli operates Red Bull KTM Factory Racing each term, for 13 years now. That is a significant period – the crew effectively took control after the late Jan de Groot passed away in the middle of 2007. The squad has won 19 Grands Prix since then, with a high of three in a single term. Kawasaki has not been the most successful manufacturer on the world stage, not by any stretch of the imagination, but it has been a good partnership.

Now, as mentioned at the top, rumours are running rampant that another squad in the Grand Prix paddock is set to take control of the Kawasaki programme. Concerns spiked when the announcement from Kawasaki made no reference to continuing in the FIM Motocross World Championship though. The statement, which is available elsewhere on MX Vice, bids farewell to MX ESCA (the official title of Chizat-Suzzoni’s operation) and does not mention anything about the future. Bizarre.

The rumours regarding their next partnership with a team are so strong though that they must be returning to the paddock – there is far too much smoke for there not to be fire there. Maybe this could be the start of something positive? Suzuki are almost a distant memory now and Kawasaki has always been thought of as the most likely to go in a similar direction, so a change to reinvigorate interest could be welcome. There has been success with the KX450-SR, but it pales in comparison to what the others have done.

Since the introduction of the MXGP (previously MX1) class in 2004, Kawasaki has taken 22 Grand Prix wins. There has been individual 42 moto wins as well. Again, nothing wrong with those numbers. They are smaller than the other major manufacturers though (barring Husqvarna who only entered the arena in 2014). Even Suzuki sit ahead of them in both categories! The good news is that they could potentially win both titles in the Grand Prix series this year. It is certainly the most promising start to a campaign that they have had.

Another subplot to this story, which is going to be very intriguing to watch unfold, is that Romain Febvre is out of contract at the end of this term. There are few options for him outside of Kawasaki too; the Yamaha effort is going to be full, Team HRC is set for a while and there are barely enough seats for contracted riders in the Austrian group. One would think that Antonio Cairoli is going to carry on racing – that is the only guy who needs to negotiate over there. Would Febvre even want to go to this new KRT set-up?

There are so many unanswered questions. This news has opened a can of worms that will keep fans talking for a while. The MX ESCA effort could continue to go racing too, just under a different manufacturer. There is no reason why they cannot do what Jacky Martens has done since he lost factory support from Husqvarna in 2019. There is a lot more information to come.