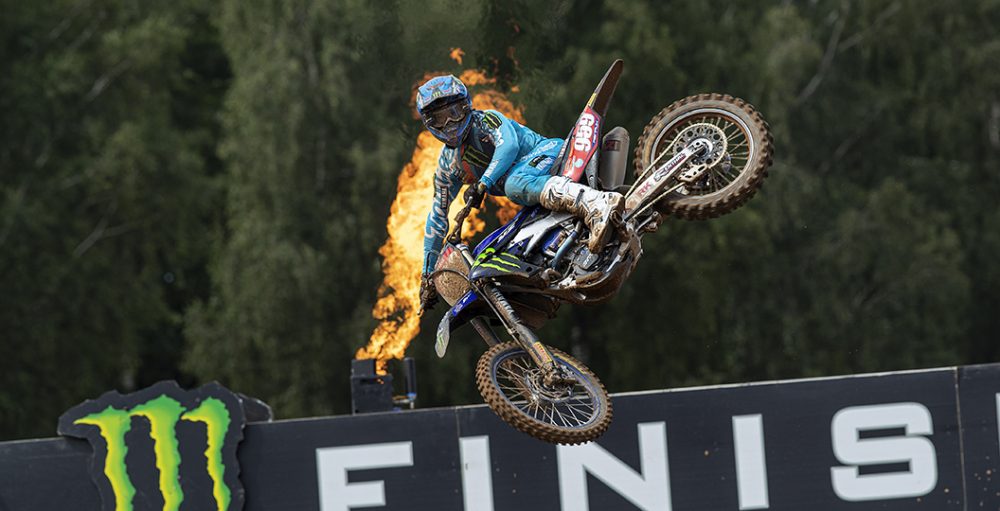 The Moment: MXGP of Latvia

The 2021 FIM Motocross World Championship has been amazing. Tim Gajser, Romain Febvre, Antonio Cairoli, Jorge Prado and Jeffrey Herlings have put on a spectacular show. A five-rider tussle for a title is truly special. There is another division that is just as intriguing though, that being the MX2 class. It just receives a lot less attention and notoriety.

The reason for drawing attention to the smaller class is that a star was born at the Grand Prix of Latvia, the seventh event of the 2021 FIM Motocross World Championship, this past weekend. Maxime Renaux walked into the venue with the red plate firmly in his grasp, but he was not considered a prominent figure. Renaux was simply one of five title contenders looking to make an impact. The most attention was not on his series leading YZ250FM, but instead the bike that belonged to his established teammate. Jago Geerts has been a force to be reckoned with around Kegums in the past and most expected a similar scenario on Sunday.

Geerts was powerless when it came to stopping his teammate though; Renaux did not lead either moto on lap one but was adamant that the Latvian event was going to be the point where he made his presence at the head of the field known. Powering to two clear moto victories for the third Grand Prix win (his first via a clean sweep) of his career helped him extend his championship lead to 34 entering the summer break. A significant figure and one that few have enjoyed after just seven competitive stops. Renaux has accelerated from contender to favourite overnight.

It can be difficult to relate to some of the newer talents in the MX2 class, but Renaux has a story that would resonate with a lot of fans. It is the ultimate tale of going to hell and back. Renaux was once considered the next great hope for France, long before Tom Vialle jumped onto the scene. Peruse the EMX125 points from 2015 and take note of the fact that he was ranked above Jorge Prado after the sixth round of eight. Renaux was on a similar trajectory to Prado and sat beneath the same Kemea tent that he resides in now, with his future mapped out.

Renaux missed out on the EMX125 title that season; he sustained a broken collarbone whilst practicing for the penultimate round and watched his championship aspirations go up in smoke. A collarbone injury is a small bump in the road to success, but it was the start of many setbacks. Renaux crashed the following year and broke his humerus (a prominent bone in his upper arm). Another season was destroyed, but he jumped back on track and focused forward in 2017. Another fall at the very first event that term resulted in a broken humerus and shoulder.

The impact of that was significant, as the healing process contained many peaks and valleys. Renaux sat on the sidelines for yet another season, which meant that he was no longer a part of the Kemea team and had to realign expectations. Rock bottom was reached in that time. It was that same term that his former rival, Jorge Prado, won a Grand Prix in the MX2 category for the first time. Renaux returned to the EMX250 class in 2018 and begun to rebuild his career with the SM Action M.C. Migliori Yamaha squad. Progress was made with each year that passed, culminating in his first Grand Prix win at the Grand Prix of Italy last year.

Renaux may be a new name to most, but the position that he now occupies is not unfamiliar or a shock to those who have followed him since he first threw his leg over a bigger bike. It has taken longer than initially planned, yes, but he is now a contender for the MX2 title. An achievement that would complete one of the most intriguing comeback stories.