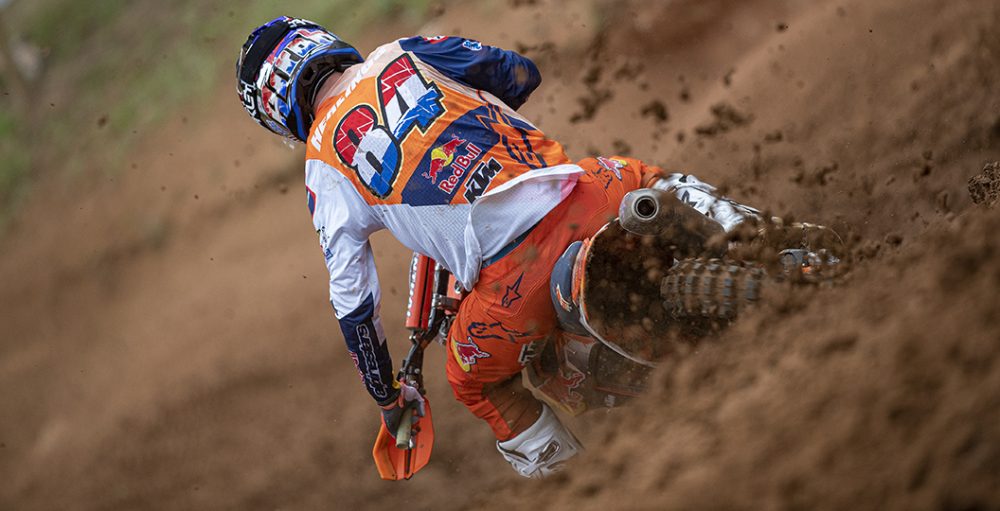 The key moment that occurred at the third round of the 2021 FIM Motocross World Championship, the Grand Prix of Italy at the historic circuit of Maggiora, was in the minutes between the second motos. The second MX2 stint came to an end underneath overcast skies – there was nothing to note. A clap of thunder then resulted in a significant downpour and changed the landscape of the Grand Prix by quite a margin.

All bets were off at that point – guys were left scrambling to ensure that they had everything necessary to tackle the conditions that were rapidly deteriorating. There were those who opted to complete the sighting lap and immediately regretted it. That was how treacherous the conditions were! Anything can happen at that point and the result was a considerable swing in momentum at a crucial point in the season. It is now advantage Jeffrey Herlings heading into a four-week stint.

Herlings had struggled at the first two rounds in Russia and Great Britain, even though he mounted the box at both events. “Struggle” is a relative term. It just seemed as though Antonio Cairoli, Romain Febvre and Tim Gajser had a speed advantage early on. Everyone was just waiting to see when he would catch fire and assert his dominance. It happened slightly sooner than expected, as he sprinted away with the moto victory in the Maggiora mud and removed the monkey from his back. The common consensus was that he needed a single win to breakthrough, like so many before him.

It was a noteworthy moment at the time, but the most intriguing thing to consider is what this means going forward. Herlings will enter his home event with less pressure and a ton of confidence, knowing that he is the fastest rider in the sand. The series will then move over to the Czech Republic, a nation that he has had a rocky relationship with, before hitting two tracks that he is almost unstoppable at in Lommel and Kegums. Momentum could be his friend over the next month and it all started in that second moto at the Grand Prix of Italy.

“For sure, I was a bit off at the first two rounds,” Herlings agreed following the third round. “Today was a good day though. I really charged back, but hey. You are racing the best guys in the business so, you know, those guys are also working on it and trying to win. I’m not the only one. Going into Oss, it is a track that is not my favourite. It is a sand track though – it is already way better. Then my tracks will really be coming – Latvia and Lommel are tracks that I really enjoy racing. We will work from there. I feel like I can still get a bit better and, yeah, that is what we will try to do.”

Heck, that win in moto two at the Grand Prix of Italy was the key moment of that event. We may reflect on that moment as the pivotal point in the entire 2021 FIM Motocross World Championship come the end of November. Herlings is dangerous with momentum, but the premier division is still so deep. There is really no telling what is on the horizon – a dominant run from Herlings is not much of a stretch though.