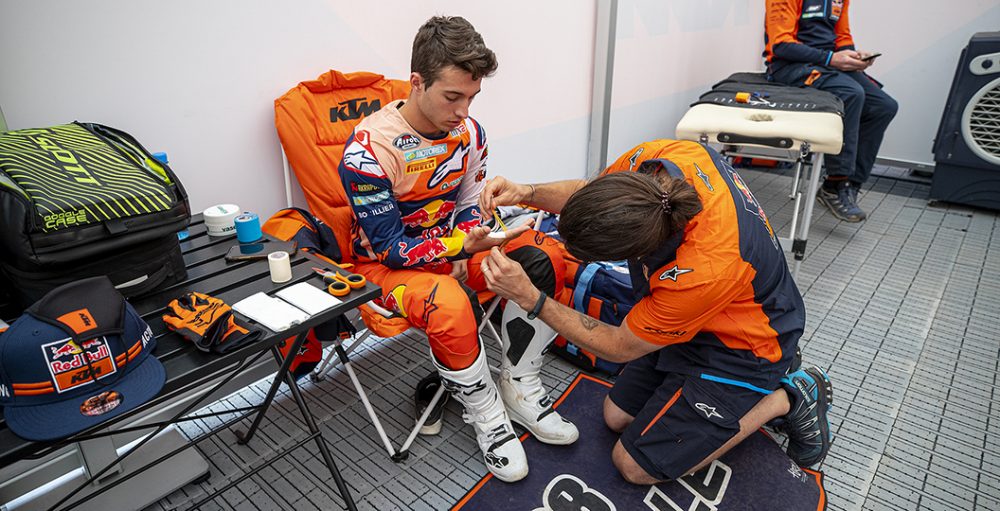 The Moment: MXGP of GBR

The key moment that occurred at the second round of the 2021 FIM Motocross World Championship, the Grand Prix of Great Britain, happened at the very start of race day. Tom Vialle ventured onto the track for the first time in MX2 free practice and everything looked normal to the naked eye – the reality was that he was dealing with an incredible amount of pain after a crash on Thursday.

The situation is tricky to explain, as Vialle and Roan van de Moosdijk hit head on in an unusual incident at the popular Lelystad practice track in The Netherlands. That sparks a lot of confusion from those who have ridden at some point. How could that possibly happen, especially with these elite guys? Moosdijk was doing practice starts and Vialle was doing a normal moto when the two hit at a point where the outside of turn one met with the outside of a regular turn. The result was a minor fracture in his hand.

“It must have been a huge impact,” Dirk Gruebel, the team manager at the Red Bull KTM Factory Racing team, told MX Vice on Sunday evening. “With that impact, he is lucky. There are just some microfractures and luckily nothing major is broken. It caused him a lot of pain. We said we would try, but with that many jumps it was just too much and we called it off for today. Hopefully we can come back at Maggiora, but we need to revise it during the week and see how it goes.

“It looked really horrible and swollen on Thursday, to be honest, but then it looked quite good seeing him here on Friday, then yesterday [Saturday] it went down again. The swelling came back after a little bit of riding but not as drastic as before, so I think that it improves every day. We need to have another look at it and hopefully he can come back at Maggiora, otherwise to make big damage then maybe we also call that one off. I still have high hopes that we can come for Maggiora to not lose that many points.”

There is simply no denying the fact that Tom Vialle was and arguably still is the overwhelming favourite to take the MX2 championship. The fact that he trails the current leader of the class, Ruben Fernandez, by 29 points is not a cause for concern. The worry will heighten if he cannot race at Maggiora this weekend – the gap would then climb to 70 points or more and that is obviously a significant margin. The fact remains that Vialle is the greatest rider in this class though.

Will he be able to salvage a respectable number of points at the Grand Prix of Italy? There have been some instances where guys have missed a round with similar injuries, then returned the following week and had some success. Do not be surprised if Vialle finds a way to appear in the top ten on Sunday. The only concern would be the fact that Dirk Gruebel singled out the jumps at Matterley Basin as an issue – Maggiora has some big leaps and hard landings as well.

Time will tell. All eyes will be on Tom Vialle, the most efficient rider in MX2, on Sunday morning. Remember to pay close attention to those wild stars who suddenly have an unlikely shot at glory though, because that is where fireworks emerge. The title may be a long shot for riders like Fernandez or Mattia Guadagnini, but this is the ideal time to take a maiden Grand Prix win.