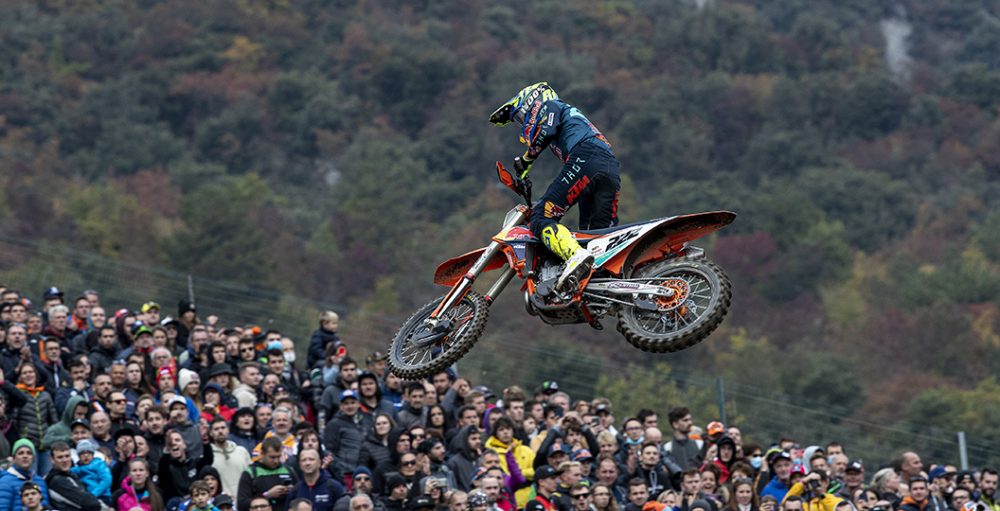 The Moment: MXGP of Garda

The key moment that occurred at the sixteenth stop of the 2021 FIM Motocross World Championship, the Grand Prix of Garda, was one that has set the tone for the remaining rounds of the year. Antonio Cairoli let Jeffrey Herlings slide past on the final lap of the second race, therefore gifting his stablemate two points in his bid for the premier class title.

Opinions were divided immediately following the move. There are some who were not shocked and felt it was logical for one Red Bull KTM Factory Racing star to help another clinch the crown for the manufacturer. This is something that has happened in motorsports over the years, of course, and will happen again in the future. It would be illogical for a guy to stand between his manufacturer and the title, right? Imagine if KTM lost the world title, because Cairoli opted to race Herlings to the line for fourth in a moto.

Jorge Prado appeared intent on doing just that, if the first moto at the Grand Prix of Garda was anything to go by. KTM spoke to Prado between motos and suggested that it would be wise for him to not race Herlings to the death each time, but they did not instruct him to simply pull over. Cairoli was not given that message – he chose to relinquish fourth on his own with no prompt. It was merely him understanding the magnitude of the situation.

“He is one of the greatest for a reason, you know?” Herlings said in awe of his teammate. “He has been at KTM for as long as I have been, pretty much. I was here in 2009 and he was 2010. What he just did… I think they did put it on the pit board on the last lap, but he was already looking for me. I felt like he was my wingman all moto. When I got next to him on the first lap, he looked at me and basically let me pass. I am not a girl, because otherwise I would probably ask him to marry me after what he did today.”

If Herlings claims the title by two points, then the internet is going to explode. The fact that he did not even start three motos earlier this term should ensure that the fans are not too outraged – one could argue that he is still at a massive disadvantage in comparison to his competitors. The Red Bull KTM Factory Racing trio will continue to be a force at Mantova, especially as the track is so hard to pass on, but both Romain Febvre and Tim Gajser can count on support from their newer teammates

Mathys Boisrame was pulled under the Monster Energy Kawasaki Racing Team awning for this very reason, to potentially assist Febvre if the opportunity arises. Boisrame tried to do exactly that in the same moto at the Grand Prix of Garda – he had a meaningless shot at Herlings whilst he was climbing up through the pack after a fall. It is surprising that such an incident is not discussed more in the constant debate about in-house tactics.

Honda were the losers in that category at Pietramurata – Gajser had no support. There are CRF450R riders like Henry Jacobi and Benoit Paturel in the premier class, but they seemed quite intent on fighting with the reigning champion than anyone else at the start of the Italian triple header. Ruben Fernandez has got on a CRF450R ahead of the final two races, despite his recent success in MX2, in an attempt to offer any kind of support to his peer. Simply getting elbows ahead out of the gate can make a difference.

The fight for the premier class title in the 2021 FIM Motocross World Championship has been phenomenal in every way possible. There have been countless twists and turns, some of which are simply unbelievable. Including teammates in this equation will only make the finale more interesting on Wednesday (yes, it is a Wednesday). What is going to happen? Honestly, who knows.