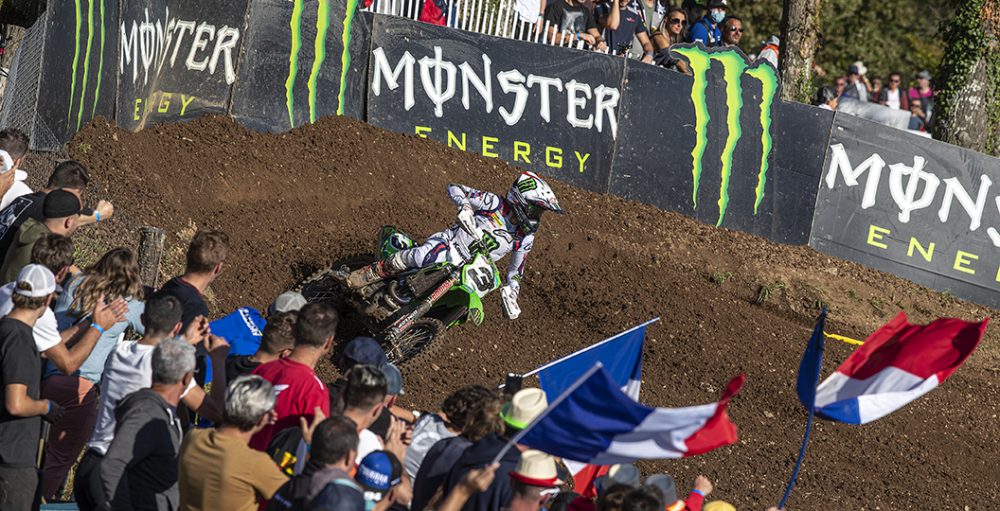 The Moment: MXGP of France

The key moment that occurred at the Grand Prix of France, round twelve of the 2021 FIM Motocross World Championship, was in the second premier-class moto, late in the day on Sunday. Romain Febvre and Jeffrey Herlings engaged in an entertaining tussle for the moto victory, one that would also determine whether or not a red plate would sit on the KX450-SR at the next stop in Spain.

Febvre has rarely beaten Herlings in a straight-up duel, but he did so in the first moto at the Grand Prix of France. It was a fantastic ride – arguably the best of his career – and one that got him to within three points of the red plate. Winning the second stint would have been crucial for his title bid. Momentum would have been in his court had he pulled off such a feat and recorded a 1-1 scorecard. It certainly seemed as though things were heading in that direction, as he moved from second to first at the halfway point.

Herlings eventually stole the lead from Febvre with four laps to go, cementing his position at the top of the table. What made the difference? Herlings was able to find another gear towards the end, lapping seconds quicker at points, whereas Febvre plateaued. It is not that Febvre started riding poorly. It is not like he was off the pace either – he was still one to two seconds quicker than riders like Tim Gajser and Antonio Cairoli. It was an impressive ride, even though it did not result in a win.

“Obviously, I am a little bit disappointed,” Febvre said following the event. “I almost won at home but it is good to be on the podium and I am happy to see so many fans. They deserved the win but I could not quite make it happen for them. It is nice to have three of us really close in the points. Hopefully, we keep it like this to the end and I can find something to make the difference at the last few rounds.”

It is difficult to analyse the year that Febvre has had, as he has been blistering fast more often than not and should have multiple Grand Prix wins to his name. There is no doubt that he should be sat on a comfortable lead in the championship standings, especially with that misfortune that his rivals have encountered. There has just been something missing at most events. It is so minor that it is almost impossible to place a finger on what that is, but it has caused him to miss on a couple of points each weekend.

Febvre could have won so many Grands Prix this season – wins were left on the table in Italy, Latvia, Turkey, Germany, and France. It is going to be very interesting to see if Febvre can bridge that gap and start to sink a couple of victories in the dying stages of this series. It is needed, of course, if he is going to serve a number-one plate to Kawasaki for the first time since Christophe Pourcel won the MX2 title in 2006. Yes, it has been that long a drought for the ‘green’ folks in the four-stroke era in the FIM Motocross World Championship.