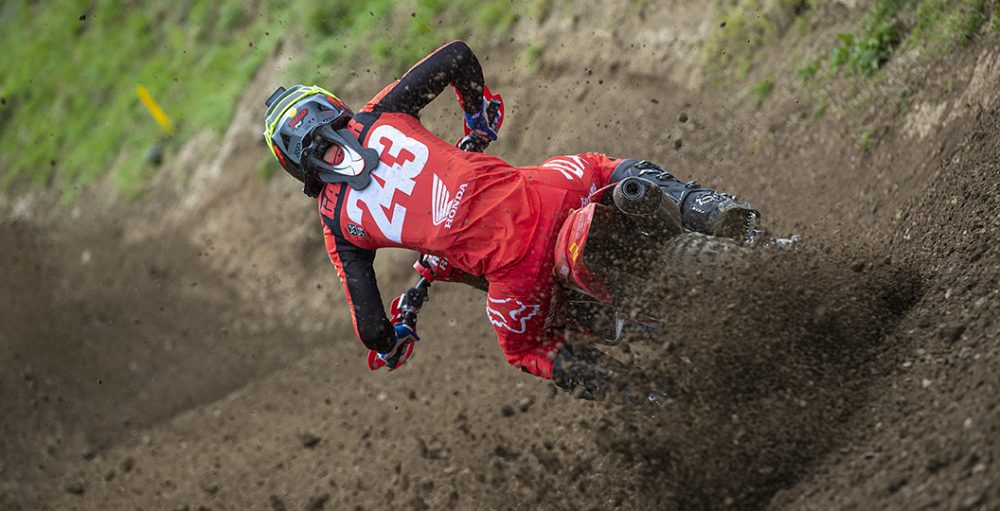 The Moment: MXGP of Czechia

The key moment that occurred at the fifth stop of the 2021 FIM Motocross World Championship, the Grand Prix of Czechia at the historic venue of Loket, was early in the second stint. Tim Gajser has made consistency a strength of his in recent months, which has baffled those who have followed his career from his first foray into MX2, yet there was an uncharacteristic mistake in Eastern Europe.

Gajser was settled into third and shadowing the leaders – the tight and twisty nature of Loket did not allow for any brave attempts at an overtake. Gajser got pitched in a section that Antonio Cairoli aptly labelled as “destroyed” in a post-race comment. The crash was violent, yet he landed on his feet in an elegant manner and was attempting to jump back onto his CRF450RW within seconds. Shades of the Gajser of old. An issue with his hand guard stalled his progress and forced him into pit lane though.

“I had a good start and made quick passes in the beginning of the race,” Gajser said in post-race chatter. “I just landed, and the bike went sideways – I had a big one. Obviously, some bad luck. My clutch lever went into the hand guard so I could not really use the clutch and had to go into pit lane. In the end I re-joined the race but managed to save some points as I came back to fifteenth. Obviously, I am disappointed but that is how it is. It happens so we move forward.”

The fall levelled the playing field somewhat – Gajser was starting to run away with this thing after his peers had suffered their own ill fate through the first four rounds. Now, instead of being more than 30 points up, Gajser leads by just 11 points. A figure that is barely worth noting with 14 rounds remaining (based on the current construction of the calendar). The most intriguing point is that momentum has shifted into another camp heading into the bottomless sand, a surface that Gajser has had a turbulent time on in the past.

If he comes out swinging this weekend and puts more points on his competitors, then that will remind fans of the fashion in which he started the campaign. Think of this as a reset point for the championship – there is not a clear favourite anymore and momentum is up for grabs. Jorge Prado is capable in the sand and very capable of gaining more ground this weekend, his health struggles are a concern in the power-sapping sand as is the fact that even he will admit that he is not quite fully healthy.

Antonio Cairoli is arguably the man to beat in this class now – he has won more motos than anyone else in the last month. The fact that he is struggling with intensity in the opening motos and has begun each Grand Prix outside of the top five has put a cloak of invisibility over that fact. Cairoli is heading into a race that he has been so strong at in the past and could take control of the situation as well, except for the fact that he has admitted that he has spent less time in those conditions and therefore his technique has suffered.

Just one moment at the Grand Prix of Czechia has transformed round six of the 2021 FIM Motocross World Championship into another opener of sorts. The hierarchy in the premier class has been turned on its head, but normality could be restored by the time that the final chequered flag falls on Sunday evening.