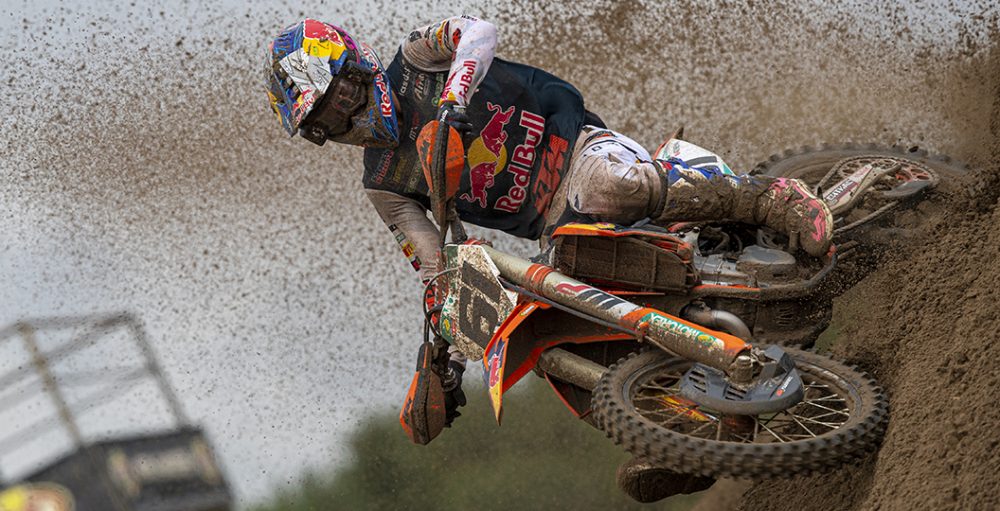 The Moment: MXGP of Belgium

The key moment that went on at the sixth stop of the 2021 FIM Motocross World Championship on Sunday, that being Grand Prix of Belgium in the bottomless sand of Lommel, was in the hours before the race. The track crew elected to leave the track rough, only flattening a couple of areas after a long day of EMX action and therefore ensuring that the MXGP and MX2 riders would face an almighty challenge.

Now that the series has been condensed because of the pandemic, the professional riders race on Sunday. The support classes take place on Saturday. Another reason for the change is the need to lower the number of active participants in the event on each day – EMX riders leave on Saturday night and help Infront Moto Racing meet restrictions in certain countries. The new format has been popular with most of the riders and teams, but track conditions have been a hot topic of discussion.

A lot of work tends to go on after the support classes on day one, but then the track does not get quite as rough as normal and thus the number of passing opportunities suffer. The opposite was true in Belgium – guys were concerned that the track was too rough, especially for the start of qualifying on Sunday morning. There was no option for riders to ease into proceedings. They were thrown into the wolves, in a move that particularly infuriated Jorge Prado.

“It was so, so rough,” Prado told MX Vice. “It was not about flowing in the sand – it was just so physical. We could not even jump, because it was so deep. It is not that I am saying that I do not want rough tracks. We have come to Lommel! After 45 minutes of MX2 practice and 45 minutes of MXGP practice, our first moto would be rough and then our second moto would be very rough. Today was not normal. People were crashing everywhere, so what do they want? Do they want to film everyone crashing? It is not funny. A little more track prep would be better or at least more fun. We do this because it is fun.

“I understand that they want to keep it a little bit rough,” he continued. “Okay, just flatten it over a little bit and then it would be kind of flat for the first session of MX2. We do not need it like a highway. We do not need it like the European [classes] for practice, not that kind of flat. Just not that bumpy! I do not think that they touched the first or second sector from Saturday morning. It is crazy! It gets so dangerous. The bumps get so deep that you get walls on the inside – that is why so many people crashed. It was the same for everyone, so I am not complaining about that.”

Many riders alluded to the same points that Jorge Prado made, commenting on how Lommel was so much softer than any of the previous terms. It is a strange point to arise though. It rained a little bit in the middle of the week, but not that much, so what would have caused such a big change in the soil composition? One would have thought that the downpour on race day was too late to cause such damage and it was not that wet. Romain Febvre, the Grand Prix winner, felt as though it was softer than usual, but not rougher than in the past

“It was like normal Lommel,” Febvre told MX Vice. “The track did not change much from last year or in practice, just the first section. Yeah, some places were tight. In the second moto, when I was behind the guys, it was tough to pass sometimes. You have so many bumps in the sand, and it is rough, so if you feel good and have good speed then it is good to make the difference. It was rough, for sure, and I feel like it was softer than usual. I do not remember it being that soft at every race that we have done here, but with the weather it was raining on and off.”

Opinions on track preparation are so subjective, so a wide range of feelings are always going to arise. There are some who would have been cursing underneath their helmet with each lap that passed and others who would have relished the challenge. The difficult conditions would have helped Jeffrey Herlings, for example, because he could rely on his natural ability to help him hit the chequered flag in each stint. It is still a bizarre turn of events though. Lommel was already renowned as the toughest track in the world. Has it just gotten even trickier?